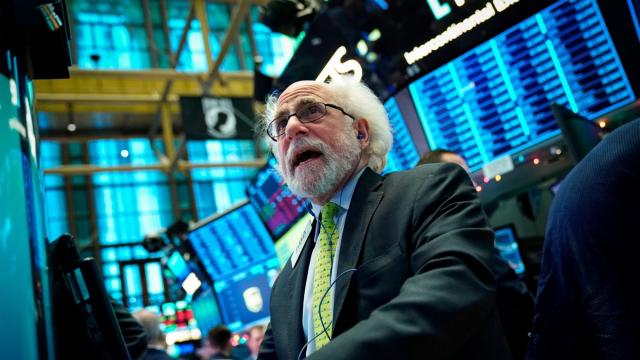 (CNN) — The erratic stock market staged a dramatic recovery on Monday from yet another plunge.

Apple (AAPL) led the turnaround. The iPhone maker erased a selloff caused by a Chinese court deciding to ban sales of most iPhone models by granting an injunction requested by Qualcomm. Apple announced midday Monday that it would appeal the court's decision, and the company insisted that all models of the iPhone continue to be available to Chinese customers.

"Anytime you get an upside reversal that's a bullish sign, at least in the very near term," said Justin Walters, co-founder at Bespoke Investment Group. "But today's rally doesn't mean we've broken out of any longer-term downtrend."

US stocks hit session lows on Monday morning after Prime Minister Theresa May said she would delay a crucial vote on her Brexit deal. The British pound shed 1.3% against the US dollar.

The Brexit chaos reinforces one of Wall Street's biggest fears: slowing global growth. Germany and Japan are already in economic contraction, while China's economy has suffered from a wave of tariffs. A messy divorce between the UK and European Union is the last thing the global economy needs.

FTSE 100 closed nearly 1% lower. The FTSE 250, which has more companies focused on doing business in the UK, dropped almost 2%.

"The big worry is economic growth," said David Joy, chief market strategist at Ameriprise Financial. "Nobody knows what to make of the trade situation."

The market is "starting to price in a recession-like scenario," JPMorgan Chase chief economist Bruce Kasman wrote in a report published on Friday.

JPMorgan estimates that the odds of a recession, based on a combination of economic data and market variables, has climbed to 36% from 25% at the end of September.

"We do not see as high a risk of recession as financial markets imply," Kasman said.

Investors are worried about how an economic slowdown would impact demand for loans. Banks are also hurt by the flattening bond yield, a central fear in recent days. The narrowing gap between long and short term bond yields makes it harder for banks to make money on the difference between what they pay out in interest rates and lend at. A yield curve inversion has been a reliable indicator of recessions in the past.

"The message that financials are sending about growth is more ominous," said Joy. "Banks are a proxy for the outlook for growth. And the outlook is diminishing."

Energy stocks like ConocoPhillips (COP) and Pioneer Natural Resources (PXD) were under pressure from another round of selling in the oil patch. US oil prices plunged 3% to $51 a barrel, reflecting lingering concern about excess supply despite Friday's agreement by OPEC and Russia to cut output.