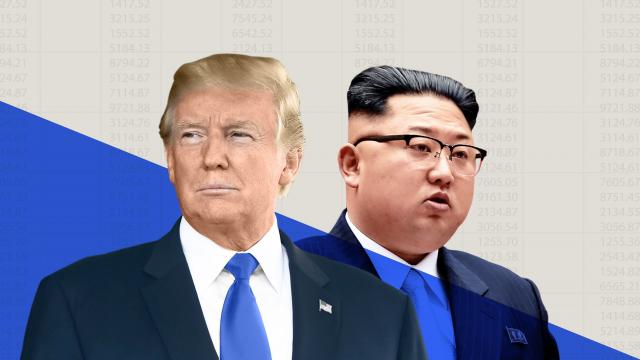 The Dow lost 250 points, or about 1%, on Thursday after the White House scrapped the June 12 meeting in Singapore. The S&P 500 and Nasdaq fell nearly 1% apiece.

The sudden decision dashed hopes among investors for the end of nuclear saber-rattling between the United States and North Korea.

The stock market has been "suffocated" by a steady stream of geopolitical headlines that mask the broadly positive backdrop for corporate earnings, said Mark Luschini, chief investment strategist at Janney Capital.

The news sparked a sell-off in South Korean funds. The iShares MSCI South Korea ETF dropped about 2.5%. The VIX volatility index jumped by 8%.

In a letter released by the White House, Trump wrote he's canceling the meeting with North Korean leader Kim Jong Un because of "tremendous anger and open hostility" in recent statements.

"You talk about your nuclear capabilities," Trump wrote, "but ours are so massive and powerful that I pray to God they will never be used."

Wall Street was already under a bit of pressure prior to the North Korea news because of Trump's aggressive trade agenda.

Commerce Secretary Wilbur Ross announced late Wednesday he's launching an investigation into whether auto imports are hurting US national security. That could lay the groundwork for tariffs on American imports of autos.

"We seem to roll from one news cycle to the next," Luschini said, "whether it's trade, North Korea or Iran."

The stock market had been on the comeback trail prior to Thursday's sell-off. The S&P 500 has rallied about 2.5% in May, on track for its best month since January.