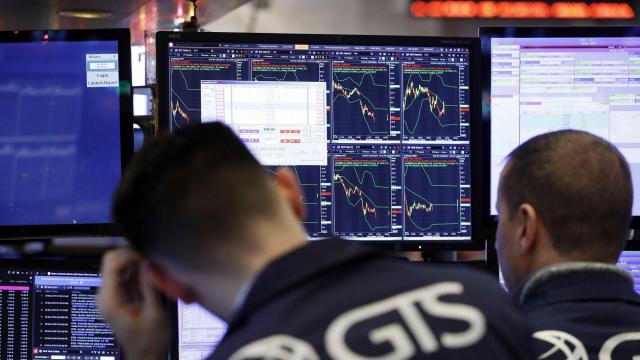 Thursday's action came a day after the Dow surged 1,000 points in its biggest daily point gain ever. The Dow was down as much as 611 points earlier in the day, but rallied in the final hour of trading.

The market has been gripped by wild swings this month, with investors concerned about a slowing global economy, trade policy, and recent moves by the Federal Reserve.

Thursday's see-saw trading session came after super-sized gains on Wednesday for a market having its worst December since the Great Depression. The Dow had its best point gain ever, and the S&P 500 and Nasdaq posted their best performances since March 2009.

But one day is not a trend. Anyone watching stocks this month knows that sentiment can turn on a dime. Jittery investors trying to read the tea leaves have seen bad omens practically everywhere over the past few weeks — even good news has rattled the markets at times.

The Dow has either gained or lost more than 350 points in seven of the past eight trading sessions. Thursday would make eight of nine. Those huge gains and (mostly) losses suggest investors remain on edge about the economy, monetary policy, trade and Washington dysfunction. December has been a very rough time for investors.

"Human nature is very consistent — pain is the ultimate motivator for change, and a 20% market swoon in under three months has most tactical and historical indicators suggesting extreme pain," said Tony Dwyer, market analysts at Canaccord Genuity, in a note to analysts.

The firm said investors should expect more volatility and attributed the unease to "chaos in Washington," as well as the Federal Reserve's decision to stick to plans for gradual interest rate increases despite the recent stock turmoil. President Donald Trump, after ripping up trade policies aimed at stitching global economies together, has further unsettled markets by signaling he wanted to fire Federal Reserve Chairman Jerome Powell. Trump appointed to his post last year but has since turned on him for raising rates.

The American economy remains strong, and most economists expect solid, if slower, growth in 2019. That's why some market analysts believe stocks are oversold. The S&P 500 is 8% lower this year, while unemployment is near a 50-year low and GDP grew at 3.4% in the third quarter.

But fear has taken over the stock market. Practically every movement lower has precipitated another big selloff.

Markets that fall around 20% when the economy is strong typically bounce back. That's what happened in 1987 after Black Monday, 1998 after the Russian debt crisis and 2011 following the American credit rating downgrade. In 1987, the market soared 50% in the following two years. Stocks bounced back 20% within four months of their lows in 1998 and 2011.

Stocks could roar back to new highs next year as they did this summer. Or this could be a recession warning sign and a signal of worse news to come.

Stocks do a reversal, global stocks caught in the tumult

On Thursday, some of the market's big winners the prior day lost ground.

All nine sectors on the Dow finished in positive territory. 3M (MMM) and IBM (IBM) were the top performers on the Dow.

GE (GE) had its fifth-best day of the year Wednesday, but dropped 1.6% Thursday.

European markets fell sharply on their first day of trading since Monday. The FTSE was down 1.5% and Germany's DAX fell 2.4%.

The Hang Seng in Hong Kong and the Shanghai Composite both shed more than 0.6% after weak Chinese industrial data highlighted the difficulties facing the world's second largest economy.

But Japan's Nikkei jumped nearly 4% on Thursday, pulling the index out of the bear market it had entered just two days ago. Stocks also climbed more than 1% in Australia and Singapore.

"The market was pressured by worries over Washington, the Fed and the threat of the trade war sparking a global recession," said Sam Stovall, chief investment strategist at CFRA Research.

Stocks were also pressured Thursday by a pullback in the monthly consumer confidence tracker. Confidence is still strong, but the report indicates that the government shutdown, volatile stock market and trade jitters are affecting consumers.

"If the consumer gets cold feet, then one of the economy's major engines may fail to keep the economy flying high," said Chris Rupkey, chief financial economist at MUFG Union Bank.