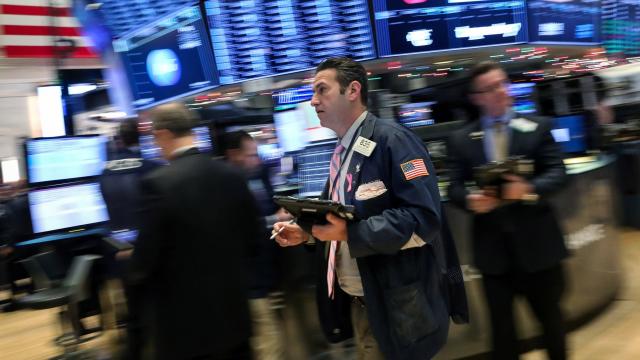 Markets were dinged by a batch of negative corporate and economic developments, especially weak growth numbers out of China and Europe.

"Something is wrong here. There is this global slowdown. We can't deny it," said Michael Block, market strategist at Third Seven Advisors, a private wealth management firm.

Johnson & Johnson (JNJ), a popular defensive stock, plunged 10% on a Reuters investigation that found the company knew for decades that asbestos sometimes tainted its Baby Powder. J&J, the worst stock in the Dow on Friday, suffered its worst day since 2002. J&J's lawyers told Reuters that its findings are "false and misleading."

The sharp selloff for J&J had a pronounced impact on the Dow. And the fact that it's a widely held stock means the pain is being felt broadly.

"This is supposed to be a hiding place. It's certainly a blow to a lot of folks," said Block. "Pain begets pain."

Friday's slide left US markets with a second consecutive week of losses. The S&P 500, down 11% in the fourth quarter, is on pace for its worst quarter since 2011. That kind of fourth-quarter loss is rare. The S&P 500 has only closed down 10% or more in the final quarter of the year 10 times since 1928, according to Bespoke Investment Group.

Jittery investors yanked a record $39 billion from global equities in the latest week, according to a Bank of America Merrill Lynch report released Friday. That included $28 billion that exited US stocks, the second-highest on record. And a record $8.4 billion was pulled from investment grade bonds.

"Capitulation out of risk" is how Bank of America chief investment strategist Michael Hartnett described it.

And money continues to flow to the safety of the US dollar, which climbed to an 18-month high on Friday against a basket of currencies.

Growth fears invaded the commodities markets as well. US oil prices tumbled 2.6% to $51.20 a barrel.

Investors were not placated on Friday by positive news on the trade front. China said it will temporarily reduce tariffs on imports of American-made cars as the two nations continue to negotiate.

Wall Street was similarly unfazed by President Donald Trump hinting at an imminent breakthrough with China. At midday, Trump tweeted that a "big and very comprehensive deal" with China could happen "rather soon." The Dow closed about 200 points below where it was trading at when Trump sent that tweet.

China's retail sales decelerated in November to 8.1%, the weakest pace since 2003, according to Bannockburn Global Forex. Industrial output was the slowest since 2002.

In Japan, a quarterly survey of business confidence by the Bank of Japan revealed that companies anticipate conditions to worsen in over the next three months.

Europe is also facing a deceleration. Business growth in the eurozone slowed in early December to the weakest level in more than four years, according to IHS Markit. The report found that the slowdown was "exacerbated" by the protests rocking France.

Hints of more muted growth in the United States are also emerging. The US private sector expanded in early December at the weakest pace since May 2017, according to IHS Markit.

PIMCO estimates that the odds of a US recession over the next 12 months have climbed to about 30%, the highest level during the nine-year economic expansion.

"The models are so far flashing orange rather than red," PIMCO's Joachim Fels and Andrew Balls wrote in a report published on Thursday.

The consumer news was more encouraging. US retail sales jumped more than anticipated in November, led by surging online growth. The numbers provided evidence that while the housing and auto industries are slowing, American consumers remain resilient.

"I don't see a recession on the horizon at all," Eisman said.