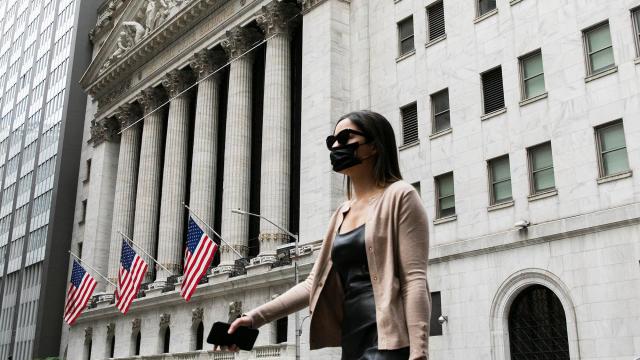 CNN — The US stock market rallied at the start of the week, propelling the Nasdaq Composite to an all-time closing high. Investors seemed willing to take risks after the long Independence Day weekend in the United States.

The tech-heavy Nasdaq closed up 2.2% — its best one-day gain since mid-May, and topping its previous record high from last week.

Tech stocks were among the best performers on Monday, with Amazon climbing above $3,000 a share for the first time ever.

The Dow finished 1.8%, or 460 points, higher, while the S&P 500, the broadest measure of Wall Street, climbed 1.6%. For the S&P, it was the longest winning streak since December at five days in a row.

US stocks rode that wave, trading sharply higher throughout the whole Monday session.

Adding to the good news was a better-than-expected report on the US services sector, released by the Institute for Supply Management Monday morning. The services purchasing managers index for June jumped to 57.1 points, marking the largest one-month increase since the survey began in 1997.

Monday's rally in US stocks once again shows that investors prefer to ignore the rising Covid-19 infections across America if there are other news to focus on. Over the weekend, both Florida and California set new record highs for total infections.

"Stock investors will soon start finding out exactly how the lockdown has hit company profits, with the second-quarter reporting season due to kick off," said Fawad Razaqzada, market analyst at ThinkMarkets.

Investors will keep a close eye on companies' guidance -- and if a lot of firms warn of worse times to come, it could put an end to the stock rally, he added.

Economists at Goldman Sachs warned over the weekend that the resurgence of cases across America's Sun Belt is an obstacle for the economy's recovery from the pandemic recession. The bank now predicts a weaker rebound in the third quarter of the year -- an annualized jump of 25% rather than 33% -- in part because consumer spending will "pause" in the summer months.

So far, though, Wall Street doesn't want to hear the pessimistic news. Unprecedented fiscal and monetary stimulus to get the country through the crisis has boosted stock valuations over the past few months.

On Monday the Federal Reserve announced its Main Street Lending Facility -- perhaps the most highly anticipated part of the central bank's stimulus program -- is now fully operational. The facility allows the Fed to lend to small and medium-sized businesses.

The Fed and other central banks around the world have shown just how deep their pockets are during this crisis.

"Central banks now own 25% to 50% of outstanding government debt. As a result, the line between monetary policy and government debt management has become blurry," said Jeffrey Kleintop, chief global investment strategist at Charles Schwab, in a tweet.