Premature babies and their mothers, like Cassandra Davis, count on donated breast milk to survive and thrive.

On March 4, Davis was still a month away from her due date, but she sensed a problem. Davis and her husband, Anthony, checked in with their birth center, and later that night, Davis gave birth.

"Later on that night...early that morning, I delivered -- and it was completely shocking," Davis said. 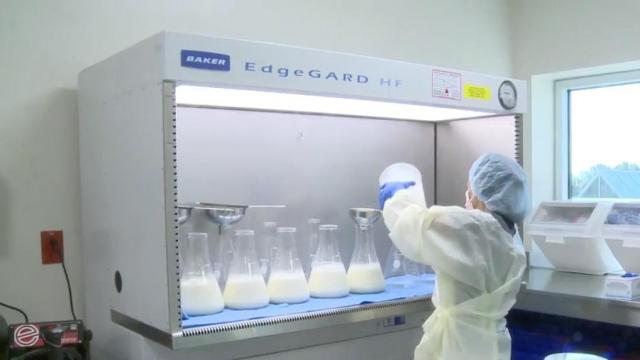 Montana Wagner-Gillespie, the manager of the Mothers' Milk Bank at WakeMed in Cary, said the bank is one of only 25 of its kind in the country -- and the only one in the state. It provides about 200,000 ounces of breast milk per year -- half of which helps preemies in neonatal intensive care units. The other 50 percent is spread through the east coast.

"It has protective antibodies and specific proteins that keep babies well and fight off infection," Wagner-Gillespie said.

Donors' milk is gently processed, pasteurized and placed in cold storage until it's needed. A detailed health screening is required before a woman can become a donor.

On Saturday, a WakeMed mobile unit will visit potential donors in the Chapel Hill and Durham areas.

"We're trying to make it a one stop shop for moms to come and go ahead and go through the whole screening process in one sitting," Wagner-Gillespie said.

Once Davis went through the screening, she became an eager donor of her own surplus milk.

"We're really thankful for those women who in the past took that whole process and donated the amount of milk to him," she said.

People interested in donating breast milk can attend the health screening event from 10 a.m. until 1 p.m. at the Women's Birth and Wellness Center in Chapel Hill. Monetary gifts of support will also be accepted.