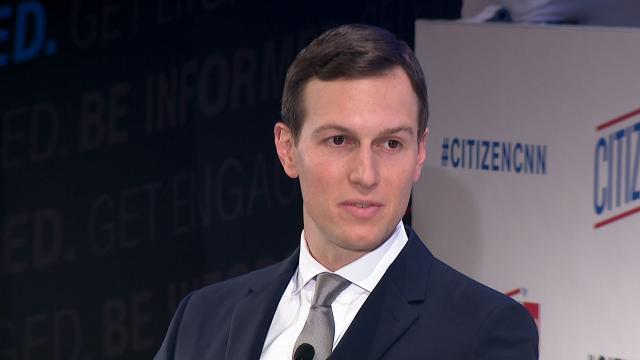 Below, a rolling list of takeaways from the day -- in the order they happened. (You can watch the entire conference live online here.)

President Donald Trump's son-in-law has a unique perspective on the man he also calls "boss." (Kushner is married to Ivanka Trump and serves as an adviser to the president.) Which is why when Kushner speaks about Trump -- and he doesn't do so often -- you need to pay attention.

Asked about Trump and the possibility that the coming 2018 midterm elections could be very bad for Republicans, Kushner told CNN's Van Jones: "He's a black swan. He's been a black swan all his life."

Which is a VERY interesting way to think about Trump. Black swan theory, for those who don't know it, is the idea -- first described by scholar and essayist Nassim Nicholas Taleb -- that there are high-profile, extreme outliers that defy all known wisdom and expectations and, in their wake, reshape what can and should be expected.

Here's Taleb's own explanation -- from an excerpt of his 2007 book -- of what makes a black swan moment:

"First, it is an outlier, as it lies outside the realm of regular expectations, because nothing in the past can convincingly point to its possibility. Second, it carries an extreme impact. Third, in spite of its outlier status, human nature makes us concoct explanations for its occurrence after the fact, making it explainable and predictable."

There's little question that Trump's 2016 election fits that description. There were ZERO indicators -- national polling, swing state polling, fundraising, ad spending, message, get out the vote -- in the run-up to the 2016 vote that suggested Trump would beat Clinton. Then he did. And in the past several years, the political world has worked to re-orient itself to explain how -- of course! -- Trump was always going to win.

The question is whether Trump as a black swan carries over to elections where he is not on the ballot. Or even any election other than 2016. Kushner believes that 2018 could be another black swan. We'll know in 15 days.

2. How Nancy Pelosi wants to use subpoena power

Pelosi has been VERY guarded about talking in anything but VERY broad terms about what Democrats might do if they retake the House majority. Which is why it was super interesting that when CNN's Dana Bash asked Pelosi about how Democrats might use subpoena power if they are in the majority come 2019, Pelosi said this:

"Subpoena power is interesting, to use it or not to use it. It's a great arrow to have in your quiver in terms of negotiating on other subjects."

So, Pelosi views the ability to subpoena members of the Trump administration to appear before various House committees as, essentially, a bargaining chip to, in her words, bring people to the negotiating table.

Which is intriguing. Because it suggests that Pelosi may not want to necessarily subpoena everyone and their brother in the Trump administration -- and she has said she is skeptical about impeaching Trump -- but rather use the ability to do so if necessary as a way to get what she wants or, at least, some of what she wants.

The question then becomes, how do Republicans in Congress and the Trump administration react to Pelosi's don't-make-me-use-this threat on subpoena power? Do they play ball -- especially considering that a Democratic House majority could make their lives very uncomfortable and gum up the works for the next few years? Or do they call Pelosi's bluff and see how far she is willing to push on subpoenas?

3. Pelosi believes she will be the next speaker if Democrats win the House

Pelosi was confident when asked whether she felt good about leading the Democratic caucus if her side retakes the majority. "It is up to them to make that decision, but I feel pretty comfortable where I am," she said of her Democratic colleagues.

She should feel good. While Pelosi has lost increasing levels of support within the Democratic caucus every two years, the truth of the matter is that there's no one who can beat her -- or, if we are being honest, come close. Both Steny Hoyer (Maryland) and Jim Clyburn (South Carolina), the two men directly below California's Pelosi on the leadership ladder, can't beat her. And there is no one on the younger end of the caucus -- where most of the discontent with Pelosi resides -- who can seriously challenge her.

The only scenario by which Pelosi could lose her top spot is if Democrats came up short in 15 days and remained in the minority. But under that scenario, Pelosi might not want to stick around anyway.

4. Count Rahm in the don't-talk-about-impeachment crowd

Outgoing Chicago mayor Rahm Emanuel dismissed the idea of Democrats running on a promise to impeach President Trump, insisting that to do so would be "basically leading with your chin."

Emanuel insisted that in order to win -- both in 2018 and 2020 -- his party needs an affirmative message that goes beyond simply saying that Democrats will get rid of Trump (or try) if they retake the House and/or Senate.

Emanuel's skepticism about leading with impeachment puts him on the side of Pelosi, who both on Monday and more generally suggested that Democrats need to pick their spots "strategically" as it relates to Trump.

His view on the impeachment issue will do little to endear Emanuel to liberals, who are already deeply skeptical of him following his term as the chairman of the Democrats' campaign arm last decade. Emanuel may not care. He is not running for a third term in 2019 and made a Sherman-esque declaration about running for president in 2020; "I can tell you with 100% certainty, I have no interest," he said. "I did eight years in the Oval Office and I have no interest in returning to the White House."

Arizona Sen. Jeff Flake (R) is in his final days in Congress, forced into retirement -- at least in part -- by a disastrous dip in his poll numbers occasioned by his frequent Trump critiques.

And while he tried to put a brave face on the current state of politics, he just didn't sound terribly optimistic about the future. As Flake put it to CNN's Jake Tapper:

"Take, for example, on the Kavanaugh thing -- but it can be on just about any issue — there is no currency, there's no market for trying to be thoughtful on something like this. To actually go in a hearing with Dr. Ford and Brett Kavanaugh and say, I'm gonna actually see what comes out in this hearing instead of announcing before what you're gonna do."

Flake's broader point is clear: There's zero political currency in being thoughtful. Or undecided. Or persuadable based on the facts presented to you. The best way to succeed, according to Flake, is to simply agree with Trump on everything or disagree with him on everything. There's no room in the middle anymore.

Cobb, once part of the legal team tasked with dealing with special counsel Robert Mueller on behalf of the President, doesn't believe his old boss is right about the nature of the Mueller investigation.

"I don't think it's a witch hunt," Cobb told CNN's Gloria Borger. (Cobb left Trump's legal team in May.) Cobb's opposition to Trump's ramped-up attacks on Mueller, whom he called "an American hero" at Monday's event, was one of the main reasons he stepped aside this spring. "Ty was uncomfortable with the Mueller tweets," a source familiar with the departure told CNN. "He was not going to be "part of a mud-slinging campaign."

Cobb was replaced as the public face of Trump's legal team by former New York City Mayor Rudy Giuliani, who has taken a -- how to say this -- more aggressive tack as it relates to Mueller.

Of course, neither Cobb, nor Giuliani nor Trump know a) what Mueller has in his probe into Russia interference in the 2016 election and b) when Mueller will tell the world what he has learned.