Donald McCaig, who followed up 'Gone With the Wind,' dies at 78 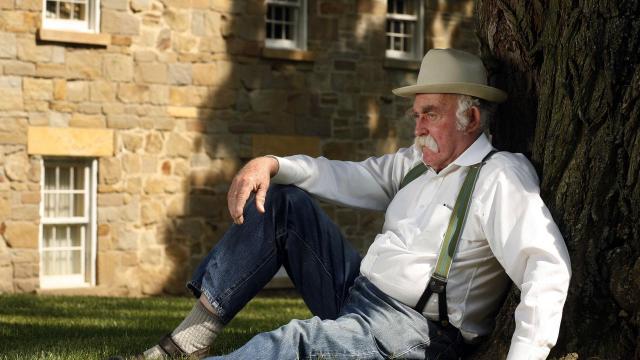 Donald McCaig, who enjoyed success with historical novels, books about border collies and two authorized follow-ups to “Gone With the Wind,” died Nov. 11 at his home in Highland County, Virginia. He was 78.

His wife, Anne, who confirmed the death, said he had chronic obstructive pulmonary disease and heart problems.

McCaig was well known to listeners of the NPR program “All Things Considered” for his homespun dispatches about life on his 280-acre farm in the Allegheny Mountains, where he and his wife raised sheep. The border collies they used to work the flock inspired a string of fiction and nonfiction books, notably the novels “Nop’s Trials” (1984) and “Nop’s Hope” (1994).

His 1998 Civil War novel, “Jacob’s Ladder,” was widely praised for its authenticity. And in 2007 he became only the second novelist to be allowed by the protective estate of Margaret Mitchell to write a follow-up to her “Gone With the Wind,” producing the best-seller “Rhett Butler’s People.” He followed that in 2014 with another, “Ruth’s Journey.”

Despite his successes, McCaig was not one to bask in the literary limelight, preferring his farm and a laid-back style. “An American Homeplace,” a 1992 collection of essays that constituted a sort of memoir, included a self-description (from a piece about having a suit altered) that was typical.

“I am built funny,” he wrote. “Picture Mark Twain’s head on Ichabod Crane’s body. Now hold your mental picture to the light and crumple it. That’s the idea.”

Donald Robert McCaig was born May 1, 1940, in Butte, Montana. His father, also named Donald, was a corporate secretary for the Montana Power Co., and his mother, Mable (Nelson) McCaig, operated a children’s clothing shop.

During the 1960s McCaig worked in the advertising business in New York. He lived a sort of double life: He and his girlfriend (and future wife), Anne Ashley, lived in the East Village, and he joined the activist organization Students for a Democratic Society while he held down a very mainstream job.

“By day, I was the copy chief of a hot advertising agency,” he wrote in “An American Homeplace.” “By night, I was Snee the poet.”

In 1971 he and Anne, who would marry the next year, bought the Virginia sheep farm. Unlike many who went back to the land in that era, they were serious about working the land and sticking it out. And McCaig began writing — something, his wife said in a telephone interview, he had always had in the back of his mind because an uncle he admired, Robert McCaig, had written some Western novels.

His early books included “The Butte Polka,” a 1980 novel about a copper mining company. His breakthrough came in 1984 with “Nop’s Trials,” about the abduction of a champion sheepdog — the title character. Nop was prone to deep thoughts, including about how humans had lost sight of why they first bonded with dogs.

It was a risky technique, but readers and critics liked it.

“If it strikes you as ridiculous that a dog would wax so philosophical,” Christopher Lehmann-Haupt wrote in reviewing the book for The New York Times, “or that he would address his fellow dogs in what sounds like the speech of old-time Quakers (‘Bear dog,’ says Nop to an elkhound who wants to kill him, ‘thy life is a bore, tied up far from freedom and thou art a bore too, with thy rage and no real work to do.’) — then you have a measure of what Donald McCaig has pulled off in this irresistibly compelling story.”

McCaig wrote numerous essays about border collies, including a 1988 article for The Times recounting a trip to the Neilston Agricultural Show near Glasgow, Scotland, to watch the sheepdog trial and, he hoped, to find a border collie to bring back to his farm.

“A good dog is valuable,” he wrote. “I was unhappy to learn just how valuable: The dogs at Neilston fetch anywhere from $1,300 to $4,200, and as you might expect, the best ones are not for sale.”

He turned that experience into a 1991 book, “Eminent Dogs, Dangerous Men.”

“Jacob’s Ladder” brought him acclaim in the field of historical novels, and when the Mitchell estate was searching for a writer for a second “Gone With the Wind” sequel, the path eventually led to McCaig. The first authorized sequel, Alexandra Ripley’s “Scarlett,” became a best-seller when it was published in 1991 but was unloved by critics. The Mitchell estate didn’t want a repeat.

“What we were most interested in was a product of high literary quality,” Paul Anderson Jr., a lawyer for the estate, told The Times in 2007. “We were looking for something not to make a quick buck, but something that would be lasting.”

After several false starts, the estate and St. Martin’s Press approached McCaig, who told The Times that he took on the assignment out of “six parts hubris and four parts poverty.” His resulting book, “Rhett Butler’s People,” was not a sequel but an alternate view of the original story from the perspective of the main male character, fleshing out Rhett’s background.

“McCaig pierces the mystery in which Mitchell shrouded Rhett Butler,” Stephen Carter wrote in his review in The Times. “He gives Rhett a life. We begin to understand where he came from, and why he was the way he was and did the things he did.”

McCaig’s other authorized “Gone With the Wind” follow-up, “Ruth’s Journey,” told the story of the character Mammy from the original novel. He dedicated the book to Hattie McDaniel, the actress who won an Oscar for her portrayal of Mammy in the film version of the original novel.

In addition to his wife, McCaig is survived by a son, Jon, and a sister, Carol Butler.

In “Eminent Dogs, Dangerous Men,” McCaig mused about how dogs had changed people.

“Since dogs could hear and smell better than men, we could concentrate on sight,” he wrote. “Since courage is commonplace in dogs, men’s adrenal glands could shrink. Dogs, by making us more efficient predators, gave us time to think. In short, dogs civilized us.”

But he warned against taking a border collie as a pet.

“If you don’t have work for a Border collie, or time to train it properly,” he advised, “your bright young Border collie will invent his own work, and chances are you won’t like it.”