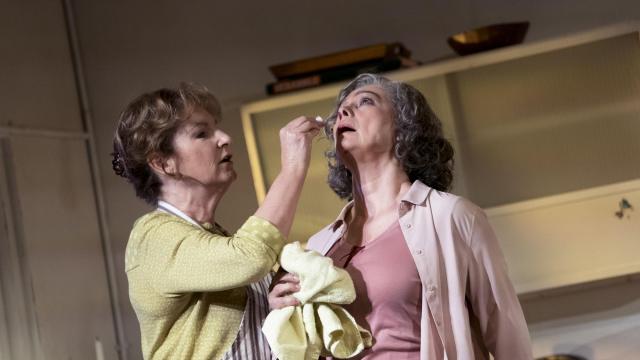 NEW YORK — British playwright Lucy Kirkwood gets the jitters on opening nights, and it was no different earlier this month when she made her Broadway debut with “The Children.” But at the post-show party, at a blues club near Times Square, politics proved an unexpectedly pleasant distraction.

It was election night in Alabama, and as word of Roy Moore’s Senate loss filtered through the crowd, Kirkwood said she felt that was reason enough to celebrate, no matter what the critics turned out to think.

“Despair is not an acceptable position,” she said later that week, “but it’s hard not to feel like the last year has been quite a hopeless time.”

Politically, that is. Artistically, Kirkwood, 34, is doing more than fine. “The Children,” an eco-drama that transferred from the Royal Court Theater in London to Manhattan Theater Club with its original three-person cast intact, went over beautifully with reviewers. In his rave in The New York Times, Jesse Green called the show “thrilling.”

With a rural coastal setting inspired by East Anglia, where Kirkwood lives with her husband, the play is on one level a quiet reunion between Hazel and Robin, a married couple, and their old friend Rose. But Rose arrives at their cottage in the wake of a catastrophe at a nuclear power plant caused by a tsunami, an echo of events from 2011 in Fukushima, Japan.

Kirkwood’s other best-known play, which has not come to New York, is the Olivier Award-winning West End hit “Chimerica,” a double portrait of Chinese and U.S. culture with a U.S. news photographer at its center.

Both that work and “The Children” thrum with awareness of the stubborn myopia that lets comfortable people stay comfortable by refusing to acknowledge, even to themselves, the big-picture impact of their actions. More recently, she’s written a Brexit-themed play called “Mosquitoes,” a science-minded drama about two very different sisters that opened in July at the National Theater in London.

The day before she flew back to Britain, Kirkwood sat down to talk in the lobby of a New York hotel. This is an edited and condensed version of the interview. Chatty and keen, she said straight off that she had gotten up at 5:30 a.m. to clean out the refrigerator in her temporary apartment, and that for her last night in New York she was thinking of seeing Sarah DeLappe’s soccer play “The Wolves.”

Only after well over an hour did she mention that she’s press-shy. What? “Yeah, yeah,” Kirkwood said. “I’ll worry about this for, like, weeks — that I’ve expressed myself badly.”

Nah, she did great.

“The Children” is a play filled with dread. What scares you?

I am frightened, as we all are, about things we can’t control. Often drama comes out of people in moments they’ve lost control of. It’s very interesting to watch someone try and cope with what the world is throwing at them.

When did you start writing “The Children”?

I’d been trying for a very long time to find a way to write about climate change. And I wanted to make it driven by emotion rather than intellect. Then the events of Fukushima happened, the terrible disaster there. There was a retired workforce that volunteered to go back to clear up the plant there. And apparently the entire country sort of voluntarily monitored their own energy usage. They managed to bring down their national energy usage just because everyone was diligent and considerate and thought about themselves as part of something bigger.

I find the idea of Britain doing that completely unthinkable. What we’re sort of battling is individualism, because you simply cannot deal with a lot of the things that we’re going to have to be dealing with in the next 50 to 100 years if you think about yourself as an individual, if countries think about themselves as individual countries. They’re going to be global issues.

What’s inspiring to you in this cultural moment?

“Chimerica” is partly about protest. Are you surprised that that play wasn’t your big U.S. splash?

Whether we brought it here was in our control, and we just made the decision not to. I’m very, very conscious and hopefully sensitive about the fact that that play, if you were of a mind to, you could say there’s cultural appropriation going on here — and not just of one country but two countries, because I’m neither Chinese nor American. You do take on a responsibility when you write another culture. But we sort of have to be brave enough to try.

I’m shocked that anyone would think writing about the United States could even be cultural appropriation, because we export so much.

Bringing over our idea of an American photojournalist — I think there was a risk involved in it. If you wrote a play tomorrow that was about the English and came over with your American director, I might go, “Hang on a minute, you’ve got that a bit wrong.” So it’s a sticky area. But I know what you’re saying, because we’re all part of American culture in such a massive way. Half the play is written off me watching “All the President’s Men” and “His Girl Friday.”

You write really substantial women. Is that important to you?

Writing Rose and Hazel was an attempt to look at the psychology of older women with a kind of depth that they don’t normally get tended to with. We have a lot of illusion of evolution at the moment. The idea that if you just change the gender of a character — if you have a male paradigm and you just slot a female actor into it — that to me is not evolution. You’re still forming the world with male psychology. You’re still saying, “This is how the world works.”

The level it happens on a lot is those massive franchise movies. Does your protagonist have a singular aim that they are just following all the way through? Immediately you are telling a story which has been conceived in a masculine paradigm. The structure of “The Children” is a real attempt to unpick that a little bit. You don’t find out until quite late in the play why Rose is there. It’s not about someone coming in and going, within the first 10 minutes, “I’m here with a mission.” You don’t have to tell a story like that. Does “Mosquitoes” feel to you related to “The Children”?

“Mosquitoes” was a commission from MTC. That’s how I originally had a relationship with them. It’s a Sloan commission, so the commission was to write a science play. I don’t have a scientific brain, so I don’t think I would have naturally gone there. For sure I think there’s probably a very slight umbilical cord connecting the plays.

What does it mean to be frightened of science and what does it mean to have fear whipped up in you about science? I really had to write “Mosquitoes” when Brexit happened. This is just about how a middle-class, liberal, intellectual class has failed the other class in our country because we haven’t stopped to explain our ideas clearly enough to them in a way that isn’t alienating.

Is it possible now to be a playwright and not be political?

Theater is a political act in itself. It runs on the promotion of empathy. All you’re doing every time is trying to tell a story to an audience that nourishes them in some way. It’s communion.