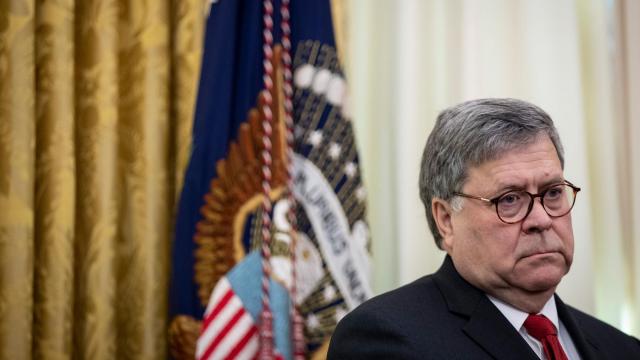 CNN — Attorney General William Barr and his lieutenants have increasingly exerted authority in politically sensitive investigations at the Justice Department, fraying relationships with prosecutors at the powerful US attorney's office in Washington, DC, and leading to an unprecedented walkout of the career attorneys handling the Roger Stone case.

People familiar with the situation at the DC US attorney's office said other prosecutors have discussed resigning in the coming days following the Justice Department leadership's decision to disavow and claw back a sentencing recommendation that prosecutors had made in the case of Stone, a longtime friend of President Donald Trump.

Barr, who has a reputation in the department as a micromanager, has played a role in other high-profile cases that are of particular interest to Trump, including in the final stages of the prosecution of former national security adviser Michael Flynn. Barr's role in the Stone debacle this week has elevated perennial allegations of political tampering at the Justice Department, and drew immediate calls from Democrats for an investigation.

It has also raised concerns about possible interference in other politically charged cases such as one in New York's southern district where prosecutors are investigating Rudy Giuliani, the President's personal lawyer. Barr has been keeping tabs on the case with periodic briefings from New York prosecutors, but he is not personally involved in the case, Justice officials say, leaving New York prosecutors to manage the investigation.

Meanwhile, Trump doubled down, punishing Jessie Liu, an official who was accused was accused of weak-kneed oversight of significant cases when she had recently led the prosecuting office, and saluting Barr on Twitter for his intervention.

"Congratulations to Attorney General Bill Barr for taking charge of a case that was totally out of control and perhaps should not have even been brought," Trump wrote early Wednesday.

Friction inside the Justice Department

It's not unusual for political appointees at the Justice Department to disagree with or even overrule trial attorneys on significant steps in a prosecution, but the public spat between the two sides this week quickly devolved into controversy. One by one, the line prosecutors who had handled the Stone trial announced their withdrawals from the case in court filings Tuesday afternoon. One resigned from his job at the Justice Department altogether.

The prosecutors on the Stone case, two of whom had served under former special counsel Robert Mueller, had calculated on Monday night that Stone deserved a stiff sentence: seven to nine years in prison, including an increased penalty for threats that Stone made to a witness in the case.

Even though the original Stone filing had been discussed with officials at the Justice Department, a senior department official told reporters Tuesday that the filing came as a surprise to top officials including the deputy attorney general and Barr, all of whom thought that an agreement had been reached to seek a less-lengthy prison term.

The official blamed the discrepancy on a breakdown in communication between the DC prosecuting office and Justice Department headquarters, known as main justice. A Justice Department spokeswoman said that the decision to retract the original recommendation was made Monday night -- before Trump criticized it in a Twitter post -- and without consultation from the White House.

The Justice Department's revised recommendation for Stone is that his sentence will be left entirely up to the judge, but about three to four years in prison would be more in line with his crimes of lying to Congress, obstruction and witness tampering.

A judge will have the final say on how much time prison time Stone will face. He is set to be sentenced next week in DC federal court.

The friction inside the Justice Department has also come to a head in Flynn's case in recent weeks. Flynn, the retired Army lieutenant general who was the first to helm Trump's national security council, pleaded guilty in 2017 to lying to the FBI about his contact with the then Russian ambassador to the US, but has in recent months waged a campaign to portray himself as a victim of malicious prosecution.

This has led to heated debates between prosecutors from the DC US attorney's office overseeing the case, who wanted Flynn to serve prison time for his admitted crime, and top officials at the Justice Department, who advocated for the government to stick to its original sentencing recommendation filed last year that called for Flynn to avoid any prison time, according to people briefed on the matter.

The disagreement played out in discordant court filings, though less spectacularly than the public dispute in the Stone case.

In one filing, prosecutors stuck to sentencing guidelines that dictated Flynn receive zero to six months behind bars, but leaned heavily in favor of Flynn serving at least some prison time, angering Barr and other senior department leaders who had thought the prosecutors weren't going to seek prison time, according to a person briefed on the matter.

Liu had advocated for a recommendation of no prison time, but later told her bosses that she acquiesced to prosecutors under her who were pushing for a harder line, the person briefed on the matter said.

After Flynn's lawyers attacked the approach, prosecutors said in a subsequent filing that a sentence of probation would be "reasonable." On Wednesday, prosecutors wrote in a new filing that the judge overseeing the case should deny Flynn's request to reverse his guilty plea, signifying that the office stood behind its case.

Liu's actual contribution to some of the cases the President cares about was limited or nonexistent, and at other times, she advocated for positions that the President would support. However, her role atop the office, which also was overseeing the languishing prosecution of Andrew McCabe, the former FBI deputy director and target of the president who is now a CNN contributor, had weakened her standing among an influential group of lawmakers and White House allies.

Trump nominated Liu to a senior position at the Treasury Department last year, but on Wednesday officially withdrew it. The announcement -- just a day before she was set to appear for a confirmation hearing in the Senate -- was made by Trump himself, a person familiar with the situation said.

The withdrawal followed lobbying to sink her nomination that also came from supporters of Flynn, according to another person familiar with the matter. Fox Business anchor Lou Dobbs, who counts Trump among his viewers, on Tuesday accused Liu of softening her office's case against a former Senate aide convicted in relation to sensitive leaks, and suggested that she had helped "cover up" his ties to the origins of the Russia investigation. Both of Dobb's claims were presented without evidence.

Barr had advocated for the President to stick by Liu's nomination in recent weeks as the campaign against her nomination kept building and appeared to be making headway with Trump, according to a person familiar with the matter. Justice Department officials were surprised to learn on Tuesday that Trump had pulled her nomination.

On Wednesday, several prosecutors from the DC US Attorney's Office went about their business at the federal courthouse in Washington, attending criminal hearings as representatives of the Justice Department in a variety of less newsworthy cases. One, when approached by CNN, said he was staying true to his ideals.

Michael Marando, one of the Stone prosecutors who withdrew from the Stone case, was among those at the courthouse Wednesday, but he did not have any cases listed publicly. Late-morning, he sat alone in the building's cafeteria, looking at his cellphone and eating a bowl of soup. He refused to comment, exiting before the lunch rush.