Roxboro, N.C. — Person County authorities and animal rescue groups have removed dozens of dogs from a Roxboro home this week after finding the owner dead inside.

Authorities checked on the home at 895 Oxford Road on Sunday after someone reported that 60-year-old Lorraine Carroll was dead. Investigators said Wednesday that they believe Carroll died of natural causes days earlier – she was last seen alive on Dec. 10.

More than 20 dogs also were found dead on the property, authorities said, while others were in poor health.

"She was a breeder, but she had separated herself from the dogs. She let the dogs have the other end of the house evidently, and she was in that one room," said Darrell Winstead of the Person County Sheriff's Office. "It was extreme [inside] ... trash, just everything in there."

Person County Animal Services workers said they had to use hazmat suits with respirators because conditions inside the home made it hard to breathe.

"It was absolutely terrible. The odor from the house alone was overwhelming," said Kelli Oakley, director of the Person County Animal Shelter. "We could not breathe outside, let alone inside."

Thirty-two dogs were found alive on the property, Oakley said, but two had to be euthanized.

"They were all severely emaciated," she said. "This was something that had been going on for a long time." 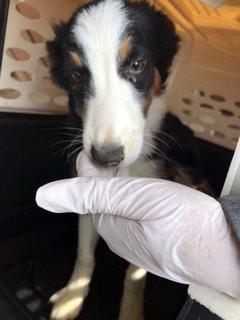 The surviving dogs were taken by Peninsula SPCA in Newport News, Va., Moore Humane Society in Carthage, Pawfect Match Rescue in Holly Springs and the Humane Society of Charlotte.

Remains of a number of dogs were found in kennels at the back of the property, Oakley said.

"I hate [that] we did not get there sooner to help more animals," she said.

Carroll apparently was still selling dogs although the American Kennel Club revoked her registration as an Australian shepherd breeder in 2015, Oakley said.

"You could look through the slats in the fence and see the dogs running, and you could certainly hear them all day long and anytime of the night," Daniel said.

"I could not tell you a number of how many dogs were back there," neighbor Mike Porterfield said. "It was right many."