Raleigh, N.C. — Andy Maddigan is mourning the death of his dog, Noelle, and warning others about the dangers of outdoor activity during hunting season.

Maddigan's wife, Dosha Bohatova, and a friend were walking their dogs off-leash on Friday along the shore of Falls Lake when the dogs ran into the nearby woods. They were never seen alive again.

Maddigan gathered a search party and spent hours looking for Noelle and his friend's dog, Lacy.

The next morning, they found Noelle, pierced and killed by a hunter's arrow. Lacy suffered the same fate. Bohatova found her on Monday, buried under some leaves.

The North Carolina Wildlife Commission is investigating both animals' deaths.

"First of all, you should not shoot a domestic animal," Lt. Sam Craft of the wildlife commission said. "It's that simple. Hunters, ethical hunters would not do such things."

But he noted that hikers and others who use North Carolina's wild areas for recreation have a responsibility as well. Anyone walking in the woods should wear bright clothing and be aware of the possible presence of hunters.

"The public needs to assume that if they're going on to public land that there's potentially hunters out there on that land," Craft said.

That was news to Maddigan. "I wasn't aware that there was active hunting going on right where people were using the park," he said.

North Carolina's bow hunting season runs from Sept. 9 through Jan. 1, and although signs are posted, it would be impossible to position them at every possible access to the gameland, Craft said.

While the wildlife commission is looking at the arrows for evidence and asking others if they saw anything in the woods off Possum Track Road last Friday, Maddigan may never know who killed the dogs. 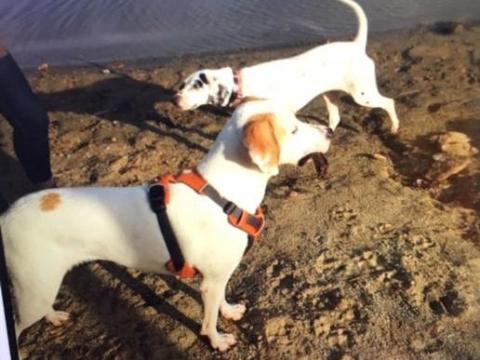 He can't help but be a little suspicious.

"You shoot one dog, it could be an accident," he said, "But as a hunter, you shouldn't shoot anything you can't positively identify.

"You shoot two dogs, it's less likely an accident."

If the wildlife commission can identify the hunter, even if the deaths were accidental, criminal charges are possible. Craft said anyone who kills a dog, even by accident, has an obligation to report it.