Raleigh, N.C. — More than 1,800 animals have new homes after 13 central North Carolina shelters waived their fees Saturday as part of the Clear the Shelters initiative.

The turnout at area shelters was strong and steady Saturday, with people lining up early to make sure they wouldn’t miss out on that perfect bundle of joy.

The Johnston County shelter was cleared quickly, and Franklin County had just one dog left at the end of the day.  SAFE Haven now has only nine cats and kittens remaining for adoption after sending 61 home with families.

“We’ve been here since 6:45 this morning and I even came last night, until they closed, to see which kitten I wanted to get this morning,” said new pet owner and Cumberland County resident Jessica Rich. “I got two, my husband doesn’t know yet, so we’ll see.”

At the Cumberland County Animal Shelter, Miranda Clum and her mother, Cynthia Thomas, adopted a ferret they plan to name Bandit. 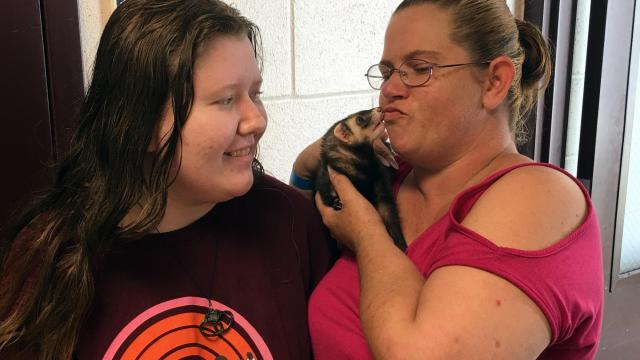 Luis Garcia and his son, Anthony, each adopted a dog during the event. The dogs got along great, and, according to Luis and Anthony, the pups will be spending a lot of time together. 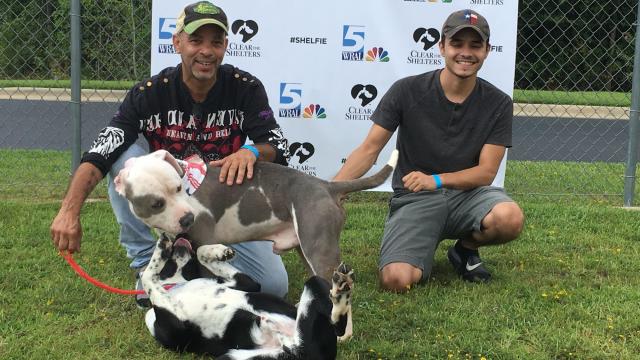 People started lining up at Johnston County Animal Services on Friday night. The shelter only had 22 cats and 18 dogs, so most of the 200 people in line at 10 a.m. Saturday left empty handed.

At the Wake County Animal Shelter, family bonds were made as the shelter remained busy throughout the day.

"I think it's a great program," new pet owner Chuck McLaughlin said of Clear the Shelters. "I really hope it really does clear the shelters, that we're able to give these animals homes."

Several of the animals who were adopted from the Wake County Animal Shelter on Saturday had to stay behind for a few extra days in order to receive additional medical care before heading to their forever homes.

"The staff enjoys it. They love seeing the ones that they've loved and ones that have been here for a long time go home, but it does give us a breather to deep clean, restart when we need it so much in the summer," said Dr. Jennifer Frederico.

What do the animals need? Shelter wish lists

For the people at Save Haven for Cats, Saturday was about more than just adopting an adorable pet. Clear the Shelters was about saving lives.

"We have already adopted over 20 animals who are all stray, abandoned, injured, orphaned cats and kittens that would not have a home if it were not for Clear the Shelters," Pam Miller said.

Although animals receive love and attention at the Animal Protection Society of Durham, volunteers know the animals would rather be in a loving home.

"Every life is important, but animals in shelters are often forgotten by people and it's so important to remember they are such great additions to families," said Shafonda Davis.

There were more smiles at Paws Forever in Mebane and at the Vance County Animal Shelter, where dogs, cats and even a rabbit got a family's attention.

"I love dogs. I have a dog of my own at home. I'm just looking for a playmate for him," said Cory Lafollette. "We're here for Clear the Shelters. We just feel that it's better to rescue a dog than it would be to go to a puppy mill."