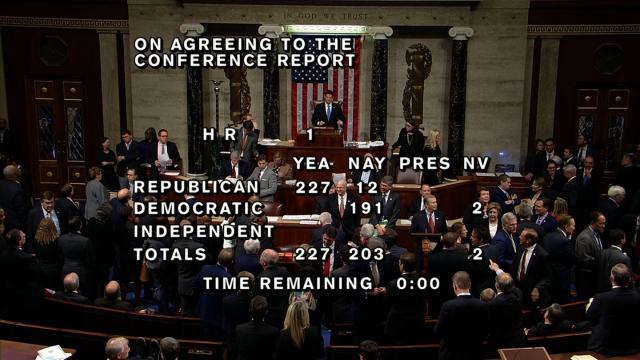 LONDON (CNNMoney) — Congress is poised to approve a tax overhaul that could spark major trade tensions between the United States and Europe.

The final version of the bill, which is expected to be approved by lawmakers this week, includes two provisions that European allies have lobbied against, and are likely to challenge in court.

The finance ministers of Germany, France, Britain, Spain and Italy sent a letter to Treasury Sec. Steven Mnuchin last week, arguing the rule changes would give American firms an unfair advantage over their international rivals.

Top European Commission officials asked for both measures to be removed from the final bill in a second letter to Mnuchin.

European officials argue that the bill would subsidize American companies by allowing a greater share of their income from exports to be taxed at 12.5%, instead of the general corporate rate of 21%.

The second provision that drew objections would subject cross-border transfers within banks and finance companies to a 10% tax, putting international lenders at a disadvantage.

Both rule changes were included in the final version of the bill despite the lobbying campaign.

"The concerns expressed, including regarding export subsidies, are still relevant," said Michael Mundaca, co-director of tax services at EY and a former tax policy official at the U.S. Treasury.

Export subsidies have long been a source of trade friction between the U.S. and Europe.

One set of U.S. tax break for big exporters were repealed in 2006 after two decades of fighting and sanctions threats from the European Union.

Similar battles could now be revived.

"There will almost surely be [World Trade Organization] litigation over the lower [tax] rate on exports," said Rebecca Kysar, a professor at Fordham University. "The most likely outcome is that the U.S. will eventually have to abandon the export subsidy regime under threat of sanctions."

The House is expected to vote on the bill Tuesday, and the Senate will follow soon after. The legislation, which is expected to pass on party lines, could be on President Trump's desk before Christmas.

Then the lawsuits could fly.

"The EU has challenged aspects of U.S. tax law in the WTO in the past, and the rules would allow it to bring a new claim once the current bill becomes law," said White & Case partner Brendan McGivern, who is the head of the firm's WTO practice. "The whole process, including a possible appeal, would take about three years -- and the final result would be binding."