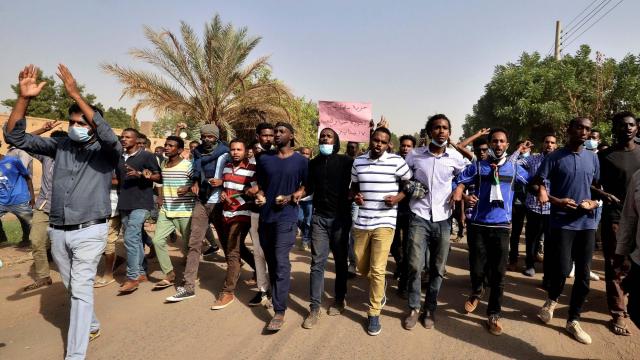 CNN — A doctor, a teenager and another man were killed on Thursday in ongoing anti-government protests in Sudan, according to the Sudan Doctors' Union and activists.

The demonstrations first began over fuel shortages and a hike in food prices but have now morphed into full-fledged protests calling for President Omar al-Bashir to step down. The authoritarian Bashir has ruled Sudan with an iron grip for 30 years.

Thursday's deaths occurred during unrest in the Bahri neighborhood in the north of the capital, Khartoum.

The doctor, Abdel Hamid, died after being shot in the head "while resuscitating other protesters," according to the Sudan Doctors' Union and another protester on the scene who witnessed his death. The witness has asked CNN not to disclose her name for safety reasons.

The Sudan Doctors' Union said a "child" called Mohammed Obeid also died in the protests after being shot in the head. The same eyewitness told CNN she knows the younger victim's family and that he was only 14 years old.

The third death was that of Moawiya Bashir, who was shot to death after security forces accused him of hosting protesters inside his house, the Sudan Doctors Union said in a statement posted in Arabic on Facebook.

An activist who is a member of the network of professionals organizing the demonstrations and was present at the protests also confirmed his death to CNN.

Bahri has been the site of some of the largest of Sudan's demonstrations since they began on December 19. Protesters described a heavy security presence there Thursday.

Sudanese state media has not reported any government reaction to Thursday's deaths. A spokesman for the governing National Congress Party declined to comment on the matter to CNN.

The protests are being organized and documented by multiple groups, including the Sudan Professionals Association and a media working group, with no centralized leadership.

The groups are made up of a network of Sudanese activists, journalists, doctors and filmmakers who are documenting, archiving and sharing videos, photos and witness accounts.

UN High Commissioner for Human Rights Michelle Bachelet expressed concern Thursday over the government's response to the protests and urged it to resolve the situation through dialogue.

"A repressive response can only worsen grievances," Bachelet said in a statement issued before the latest deaths were reported.

"I am very concerned about reports of excessive use of force, including live ammunition, by Sudanese State Security Forces during large-scale demonstrations in various parts of the country since 19 December. The government needs to ensure that security forces handle protests in line with the country's international human rights obligations by facilitating and protecting the right to peaceful assembly."

The Sudanese government has confirmed the deaths of 24 people in the course of the protests, according to the UN statement, "but other credible reports suggest the death toll may be nearly twice as high." Many other people have been injured, the UN said.

Four human rights organizations voiced concern in a news release Friday over the arrest of hundreds of protesters across the country since the protests began.

The news release cited the Sudanese Interior Ministry as saying at least 816 people had been detained as of January 7. They include protesters, doctors, journalists, lawyers and opposition party leaders, the rights groups said.

"The number of arbitrary arrests related to the recent protests is huge, and the government seems intent on pursuing more arrests, repression, and other abuses as long as the protests continue," said Mossaad Mohammed Ali, executive director of the African Centre for Justice and Peace Studies, one of the four organizations involved.

"Violence won't help Sudan overcome its many problems," said Jehanne Henry, associate Africa director at Human Rights Watch, another of the signatories. "Rather than using violence and abuses to clamp down on dissent, Sudan needs to engage peacefully with protesters' concerns."

In 2010, the International Criminal Court charged Bashir with crimes against humanity, including genocide, related to the Darfur conflict in Sudan.

Sudan is oil-rich, but poverty is rife in the country, with many of Bashir's critics attributing its economic woes to widespread corruption.