Do You Know Me? I’m a Candidate for Governor 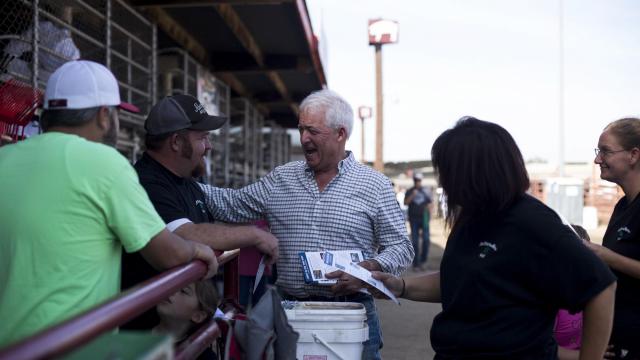 THOUSAND OAKS, Calif. — John Cox, the Republican businessman running for governor of California, and his small entourage breezed through the doors of an In-N-Out Burger in Ventura County the other day. Cox introduced himself to a couple at a corner table eating burgers, mentioning how he has been rising in some polls.

“People still don’t know who I am,” he said to the couple. “You’ve barely heard of me, right?”

As he was leaving, Robert Risinger, 57, was one of the few who did recognize Cox and said, “Good luck, I hope you win.” After he was gone, trailed by the aroma of Double-Doubles and fries, Risinger, who described himself as an “independent centrist,” meant he believed Cox had no shot, quickly adding, “this isn’t a liberal state; this is a leftist state.”

Such is the uphill battle for a Republican running for governor in California, where no Republican has won statewide office since Arnold Schwarzenegger won the governor’s seat in 2006. Analysts have called the campaign just short of a coronation for Gavin Newsom, the Democratic lieutenant governor and former mayor of San Francisco, in the race to replace the popular outgoing governor, Jerry Brown.

Newsom is well ahead in the polls and has been busy campaigning for Democrats running for Congress, while playing down his own race. Still, Cox has made some gains. In July he was 24 points behind in the polls, but Newsom’s lead has since been cut in half — 51 percent for Newsom, 39 percent for Cox — according to a recent poll conducted by the Public Policy Institute of California.

And Cox has a resonant message: that too many Californians, amid an economic boom that catapulted the state to the fifth-largest economy in the world, are struggling to make it. Tens of thousands of Californians are homeless, neighborhoods resemble dystopian tent cities. Housing prices have skyrocketed, putting homeownership out of reach for millions.

A recent television ad from Cox’s campaign paints a bleak picture of California, saying, “Gavin Newsom, it happened on your watch.”

In his campaign, Newsom echoes many of Cox’s concerns about issues confronting the state, but as the two candidates agree on the diagnosis, they differ on the remedy. Newsom would spend more money on housing subsidies and push for single-payer health care. Cox has offered a conservative approach, saying he would cut red tape and regulations to bring down the cost of housing, spend more on addiction and mental health treatment, and support efforts to force homeless people into treatment.

“I’m sorry, I don’t have a legal right to pitch a tent in front of Steven Spielberg’s house, even if I’m mentally ill,” Cox said in an interview on his campaign bus, driving from the In-N-Out to a gas station in Santa Clarita, where he talked to drivers about California’s high gas prices, one of his campaign issues. “That hurts his standard of living. And by the way, it’s not compassionate either. It’s not compassionate to let people sleep in the streets.”

No television debates were scheduled between the candidates, and just a single radio debate, held last week by KQED, San Francisco’s public radio station, has brought them together.

In the debate, Cox said as governor he would reduce regulations that he believes have driven up the cost of homes. “My vision of California is where people can afford to buy a house,” he said. “They can afford gasoline. They can afford water, electricity.”

Given the lack of debates, analysts say California voters are being deprived of the opportunity to size up their choices.

“These two candidates are not really sitting down together and having an earnest conversation about what ails California and who has the better solution,” said Bill Whalen, a research fellow at the Hoover Institution and former adviser to Pete Wilson, a Republican governor.

As for Newsom, Cox said, “my opponent is all about the House. And why is that? He wants chits when he runs for president.”

Newsom has consistently batted away presidential speculation, and his spokesman, Nathan Click, said in response to Cox’s comment, “John Cox, President Trump’s protégé and total lackey, would love nothing more than having two more years of a GOP-controlled Congress ramming Trump’s harmful agenda down Californians’ throats.”

A multimillionaire who grew up in Chicago, Cox made much of his fortune as a real estate developer, building apartments in the Midwest. He was once registered as a Democrat — he voted for Jimmy Carter — and ran for office as a Republican in Illinois, for Congress, Senate, the Cook County recorder of deeds and briefly for president, in the 2008 race. He lost each time. In 2007 he bought a house in Rancho Santa Fe in San Diego County, and has spoken about his long-standing ties to the state, where his grandparents and mother came for retirement.

Cox was lifted in the June primary by an endorsement tweet from Trump. Analysts say Republicans have never thought he had a chance in the race, but calculated that getting a candidate for governor on the November ballot would draw Republicans to the polls and help in the races they were really focused on: protecting Republican congressional seats. “If you don’t have a Republican on the ballot for governor or Senate, it just turns off voters,” Whalen said.

An effort to repeal California’s gas tax with a ballot proposition, which Cox supports, was also embraced by the Republican Party as a way to get Republicans to the polls. But that has so far sputtered; polls now show the initiative is struggling to pass.

Cox has garnered endorsements from reliably conservative constituencies, such as farmers and law enforcement groups who believe recent criminal justice reforms to reduce mass incarceration have led to an increase in crime. “He cares about victims of crime and will make our communities and our schools safer,” said Ron Hernandez, the president of the Association of Los Angeles Deputy Sheriffs.

The Orange County Register, in endorsing Cox, reflected a widespread anxiety among Republicans in the state about Newsom: that government spending will soar and crimp economic growth. As governor, Cox, the newspaper wrote, “will encourage economic growth, expand housing opportunities and reverse the state’s affordability crisis.”

Cox lags far behind Newsom in fundraising. Cox has raised about $12.9 million for the campaign, $5.6 million of that out of his own pocket. According to the most recent disclosure by the California secretary of state, his campaign has about $1.7 million in the bank. Newsom has raised $21.3 million this year, and as of late September had more than $16 million in his coffers.

So Cox has taken to the road to engage in retail politicking. Dressed in bluejeans, with a head of white hair and the bearing of a dad out running weekend errands, he made his way up the state on his green and white bus emblazoned with the slogan “#HelpIsOnTheWay.” The tour began at a Sriracha factory, in eastern Los Angeles County, where Cox spoke with workers about the cost of living, and was served chocolate ice cream spiced with the hot sauce. “The breakfast of champions,” he told his hosts. “I can feel a little bit of kick in there.”

Then it was onto a Costco gas station to highlight high prices at the pump. “I have a captive audience here in line,” he joked.

To one driver at the gas station, Cox dismissed Newsom’s recent tour of Democratic campaign offices, saying: “My opponent went to political offices and talked to operatives. I like talking to real people.”

A few hours later, at the Kern County Fair in Bakersfield, Cox addressed a friendly audience. “I’m a farmer, so I’m obviously not too excited about Gavin Newsom,” said Todd Tracy, who grows pistachios and almonds and, like many farmers, worries about water resources and blames environmentalists for protecting fish at the expense of agriculture.

Before finishing the day’s campaigning at a farmers’ market in San Luis Obispo, Cox stopped in Fresno and under a scorching sun, did an interview with a local television channel near a portion of track for California’s high-speed rail. Cox has said he would abandon the $100 billion project championed by Brown. “This is a monument to corruption and mismanagement and unproductive spending,” he said.

Unlike Newsom, who relishes challenging Trump and his agenda, Cox does not talk much about the president. The pick-me-up tweet may have helped Cox in the primary, but any association with him is seen as a liability now that Cox is seeking support from independents in a state where Trump’s approval rating is around 36 percent.

“I think you never want to turn down the president of the United States,” said Cox, who said he did not vote for Trump and has never spoken to him. “I respect him and the office. But I’m my own man. I’m talking about the issues that affect California, most of which he has nothing to do with.” On the bus, Cox talked about the challenge of getting his name out there.

“We have a politician, Mr. Newsom, who has made a name for himself,” Cox said. “Made a national name for himself as mayor of San Francisco. So his name recognition is probably 95 or 99 percent. Against a business guy who just came out of the woodwork basically. I’m not a celebrity. I’ve never sought the limelight for anything here. I’m getting known. I expect over the next 30, 40 days people are going to know who I am.”