THAM LUANG CAVE, Thailand — Divers began an effort to rescue 12 boys and their soccer coach Sunday morning from the cave where they are trapped as officials race against the threat of rains flooding the site and making such an effort impossible.

Narongsak Osottanakorn, commander of the rescue operation that has transfixed the nation, said they hoped the first rescue would take place Sunday evening. But it could take days to rescue them all.

He made the announcement after officials began clearing the site outside the cave of journalists.

The boys and their coach were found safe last week, drawing considerable attention from the news media.

But ferrying those stranded through a nearly 3-mile maze of perils is a daunting proposition, experts said, all the more so since none of the children are said to be able to swim, much less use diving gear.

Some Thai officials proposed leaving the boys and their coach in the cave for four months, until the water subsides and they can walk out. But Narongsak said Saturday that it would probably take even longer — until December or January — for the water level to get that low.

“We are still in a war against water and time,” he said. 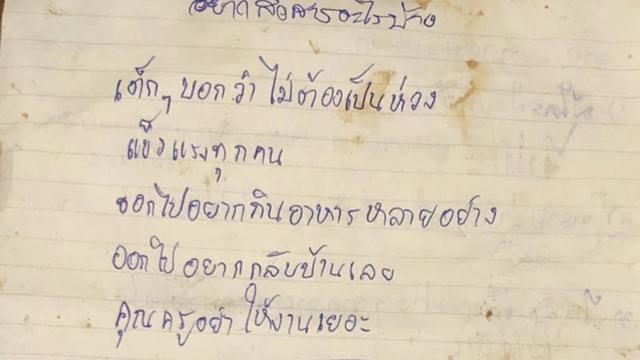 This is the monsoon season, and when heavy rains return, they could send a pulse of floodwaters through the cave complex, endangering the group.

Crews on the mountain drilled more than 100 holes — one of them 400 meters deep — but none reached the cavern where the group is trapped, Narongsak said. They also attempted to run a hose from the cave entrance to pump air into the cavern, where the oxygen level remained a major concern. It has been measured as low as 15 percent.

“As you can see, all the officials have a mountain on their shoulders,” Narongsak said.

Although three of those stranded had been described as weakening, Narongsak said the team was in relatively good condition overall.

“All the kids are healthy,” he said. “They are happy and they are safe.”

In letters home, written on water-stained paper and posted Saturday on Facebook, the boys and their coach sought to reassure their families that they were in good hands and in good spirits.

Narongsak offered condolences to the family of Saman Gunan, the former Thai navy diver who died Friday after placing spare air tanks in a flooded passageway. And he thanked foreign divers who have come to assist in the rescue operation.

In one of the team’s letters, posted to the Thai navy SEALs’ Facebook page, a boy expressed his gratitude.

“The SEAL team takes very good care of us,” wrote Panumat “Mix” Saengdee, 14. The divers have been bringing the team medical supplies and food.

The boys’ parents had written to them earlier. The letters, carried by divers making 6-hour trips in each direction, were the first direct communication between the parents and their sons. Attempts to establish a phone line to the cavern where the boys are trapped have not yet been successful.

The boys’ coach, Ekkapol Chantawong, wrote to the parents as a group, promising to take care of them as best as he could. The parents had written to him earlier, assuring him that they did not blame him for the situation.

“Thank you all for the support,” the coach wrote. “I deeply apologize to the parents.”

He also wrote to his own family members — an aunt and his grandmother — asking them not to worry too much about him.

“Aunty, can you please tell granny to prepare vegetable juice and pork snacks?” he wrote. “I’ll eat them when I get out. Love you all.”