Dionisio Lind, Whose Voice Was a Mighty Carillon, Dies at 87 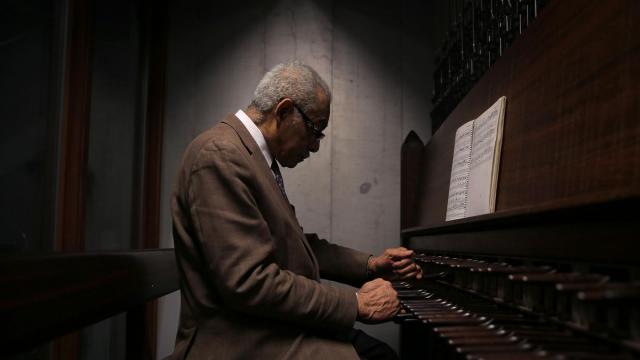 Dionisio Lind, whose bell ringing was heard but not seen by generations of New Yorkers who harkened to the pealing from carillons at two majestic Manhattan churches, died Oct. 10 in New York. He was 87.

The cause was complications of cancer, his niece Sandra Sanson said.

Lind was the carillonneur at St. Martin’s Episcopal Church in Harlem starting in 1960 and then, from 2000 until he retired this year, at the Riverside Church in Morningside Heights.

He was also “the first professional black carillonist in the world,” said Tiffany Ng, who teaches music at the University of Michigan, Ann Arbor, and is the carillonneur there.

At Riverside, Lind commanded the clavier, or console keyboard, of the world’s heaviest carillon, with the largest single bell. In the early 1970s, before he began working there regularly, he was called on to play at the church at the funerals of Jackie Robinson and civil rights leader Whitney M. Young Jr.

If bells were originally believed to be the voice of God, it could be said that Lind got closer to the source than anyone else in either of the congregations for whom he played. At Riverside, he was perched in a glass-enclosed aerie below the belfry of the tower, which rises 392 feet above the sanctuary.

He would ascend from his 21st-floor office at Riverside, up a catwalk in a limestone tower so lofty that the peals must be piped into the nave below. Once there, he would execute feverish four-limbed virtuosity with fists over the knoblike keys, called batons, and feet on the pedals. The batons and petals tug on wires and levers that control the clappers and merge the notes of the 74 bells into harmony.

“I love the bells,” Lind told The New York Times in 1994. “Sometimes, when I’m depressed, I come to church and play, and it just lifts me up.”

Until 2002, when St. Thomas Church on Fifth Avenue added more bells, St. Martin’s, on Malcolm X Boulevard and W. 122nd St., and the Riverside Church, at Riverside Drive and W. 120th St., were the only carillons in New York City that met the standard definition of the instrument: played from a keyboard and consisting of at least 23 bronze bells capable of spanning at least two octaves (as opposed to smaller groups of bells, or bells that are rung by hand using ropes).

At Riverside, the Laura Spelman Rockefeller Memorial Carillon was donated by John D. Rockefeller Jr. (Laura Spelman was his mother) and installed in 1930. Weighing almost 100 tons, it has a five-octave range, and its bells vary in weight from a 10-pound treble bell to the 20-ton bourdon, the largest tuned bell ever to be cast; it bongs on the hour.

Lind was only the fourth full-time carillonneur at Riverside, which is modeled on the Chartres Cathedral in France, a supreme example of Gothic architecture. The Riverside carillon is an expanded version of bells that were originally installed in 1925 at the Park Avenue Baptist Church. Park Avenue’s congregation — and its bells — moved in 1930 to Riverside, which is now interdenominational.

Dionisio Antonio Lind, who was known as Dio, was born on Feb. 10, 1931, in Manhattan. His father, also named Dionisio, was a Pentecostal minister. His mother, Minnie (Douglas) Lind, worked for the New York City Parks Department.

After graduating from Seward Park High School on the Lower East Side, Lind married Claudia Gittins. The marriage ended in divorce. He is survived by their children, Dennis Lind and Diana Lind; four grandchildren; two great-grandchildren; and a twin sister, Gloria Vanterpool.

Lind lived in Flatbush and worked full time as a production manager for the de Gunzburg Society, which stages functions to honor supporters of ORT America, an organization that funds and runs education, vocational and literacy programs.

Lind was baptized at St. Martin’s and was so enraptured by the sound of the bells that, in the 1950s, he asked to be taught to play them by the church’s carillonneur. In 1962, St. Martin’s sent Lind to the Royal Carillon School in Mechelen, Belgium, for six months to study.

The carillon can be considered a percussion instrument, given that the batons and pedals respond to how much pressure is applied. Pounding on a baton with a balled fist can produce a particularly loud piercing sound, and stomping on the pedals can sound the biggest bell’s low F.

“Hostility, almost,” was how Lind described it to The Times in 2015. "We’re socking it, almost. It’s a great feeling.”

However, he said, he had never considered taking up the drums: “Too much noise.”

Allison Davis, who was the Riverside Church’s director of communications, recalled in The Daily News in 2011 that Lind had struggled all his life with a severe stutter. The carillon, she said, allowed him to speak eloquently.

“I never knew that bells could sing like that,” she said. “His voice is in that instrument.”