Diocese of Raleigh cathedral taking shape, on track for completion 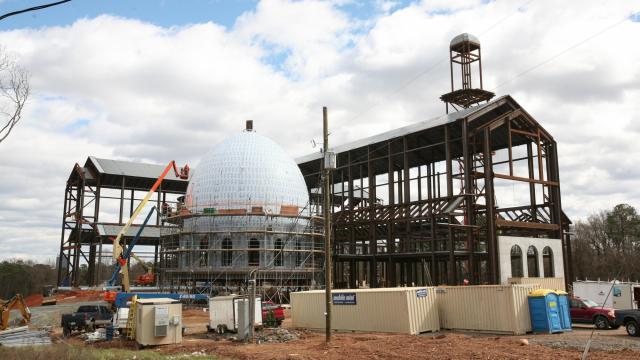 Raleigh, N.C. — The new cathedral being built off Western Boulevard by the Catholic Diocese of Raleigh is long overdue.

Billy Atwell, the communication director for the diocese, said the current parish in downtown Raleigh was built to hold 320 people, which was outgrown by the 1940s. The parish now holds 11 masses each weekend to accommodate everyone.

The new $41 million Holy Name of Jesus Cathedral, wedged between Western Boulevard and Centennial Parkway just southwest of downtown, will seat 2,000 people. Atwell said the project is still on track to be completed by fall 2017.

"We have some little weather delays here and there," Atwell said. "But it's been really phenomenal about getting back on the horse and getting things moving."

At the end of February, the steel skeleton of the cathedral towered over Centennial Parkway on its south side, and a huge dome was taking shape on the ground. That dome will eventually perch on top of the cathedral, though moving the 160-ton structure will take some careful planning and a special crane.

"To place the dome is not a two-hour project," Atwell said. "It's like a 24-hour project. Maybe more. It's a really enormous project."

As the walls are being built, the stained glass windows are in the process of being restored. More than three dozen windows were pulled out of church that closed in Philadelphia, but that's a tedious process in itself.

Atwell said each piece of glass has to be removed from the lead window frame, cleaned and replaced. There are at least 500,000 pieces of glass in the salvaged windows alone. Raleigh's new cathedral will also sport 50 original stained glass windows, which are being made by the same company that's restoring the old windows.

The windows from Philadelphia were made by a German artist. Saving the windows, Atwell said, was an important way to preserve a piece of history.

"It's an opportunity to rescue Catholic art history," Atwell said. "There's not many opportunities to build a cathedral."