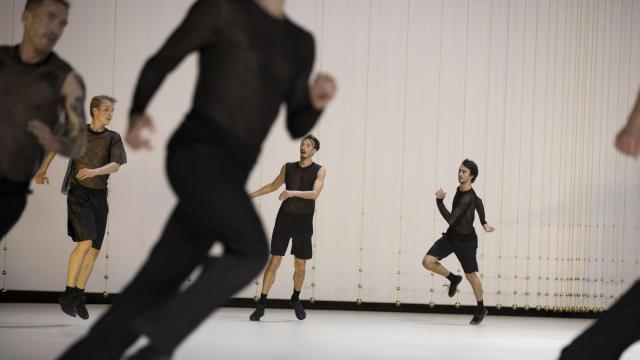 NEW YORK — What is it about Bach that just makes you want to dance — or, at the very least, to run, skip and hop? The music is lush, infectious. It has a beat. You don’t need a partner sweeping you along — the music does it for you.

But as Anne Teresa De Keersmaeker showed with her new “The Six Brandenburg Concertos,” her fifth work set to Bach, you have to be fearless enough to ride along with it. Her Bach was diluted and indifferent.

De Keersmaeker, who is based in Brussels, is not alone in her adoration of the composer; other choreographers, over the years, have created masterworks to Bach’s music, including George Balanchine, Jerome Robbins, Paul Taylor and Twyla Tharp. For her part, De Keersmaeker has been listening to “Brandenburg Concertos” for decades. In 1981, while choreographing her classic work “Violin Phase,” set to Steve Reich, it was the only other recording she played.

In “Brandenburg Concertos,” De Keersmaeker starts out simply with the most human of movements: a walk. A leashed white dog — with a charming spot covering one eye and a panting smile — joins in during the horn section. He’s curvy and not really the hunting type, but that makes his presence all the more endearing.

It was a cheerful moment in an otherwise arid production that found its pulse intermittently, but rarely with exacting power and flow. The connection between the music and the movement linked instruments to physical expression; but as for drawing out the music’s dancing spirit, the work was increasingly disjointed.

As the first concerto filled the vast expanse of the Park Avenue Armory on Monday — the music was performed live by the ensemble B’Rock, under the direction of the violinist Amandine Beyer — 16 dancers walked forward and back, stitching straight lines from the back to the front of the stage and eventually veering into diagonal crossings.

Dressed entirely in black, the dancers — like musical notes against a white circular stage and backdrop — wore heels, sneakers and hard-soled shoes; their purposeful strides matched the bass line of the music before their gait dipped with the aid of a trailing back foot.

Each new concerto was announced by a man crossing the stage and holding a sign, like a ring girl for classical music, while musicians exited and entered the pit to tune up. But as concerto followed concerto, the dances diminished in size, and the movement lagged at times to the point of lugubriousness. The pauses between concertos didn’t help: Snippets of silent dancing attempted to fill in the space during transitions, but they were too faint and fleeting to keep the momentum going.

Throughout this long-winded evening, De Keersmaeker’s curving pathways had her performers crossing the stage in circles, straight lines and spirals, but they frequently stuttered to a halt. There was a wearying repetition to the vocabulary, which included an assortment of actions that never quite added up: a handstand with a bent knee, a limping walk and — moderately exciting — a hop with a twisting torso.

Livelier moments occurred during the finale and in the third concerto, in which a group of men skipped and swirled around the stage, swinging their arms gamely as they bounced forward and back. Yet for all its energy, it was a lighter, less intricate version of “Esplanade,” Taylor’s revered 1975 modern dance set to Bach based on pedestrian movement — walking, running, jumping and sliding.

Here and elsewhere, De Keersmaeker’s men — 12 in total — dominated the production, yet seldom let go of their inhibitions, which seemed true of “Brandenburg Concertos” as a whole. The dancing trickled behind the music, giving the choreography the sense that it was unfolding in slow motion. It lost its rhythm.