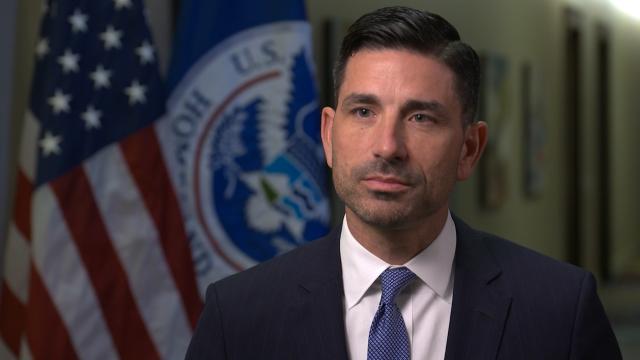 CNN — The Department of Homeland Security admitted on Thursday that it made false statements to defend a decision earlier this year to block New York residents from participating in Trusted Traveler Programs, including Global Entry.

The admission in a court filing came on the same day the department announced it will allow state residents to participate in the program again. DHS blocked New Yorkers from the program over provisions in a state law protecting the information of undocumented immigrants applying for driver's licenses to be shared with federal immigration enforcement agencies.

However, several other states, whose residents are able to participate in the Trusted Traveler Programs -- which expedite service for preapproved travelers entering the US -- do not currently provide federal authorities with full access to applicants' driving history, the court filing notes.

DHS said Thursday that Gov. Andrew Cuomo and the state Legislature had amended the law, which went into effect last December. But government attorneys on Thursday also wrote to "correct several statements" in the department's previous briefs and declarations in a letter to the federal judge.

"These revelations undermine a central argument" the government made to block the program from New Yorkers, reads the filing. The New York Times first reported on the agency's admitted "inaccurate" statements.

The government also claimed the restrictions were unique to the New York law, which went into effect last December and allowed undocumented immigrants to apply for New York driver's licenses while protecting applicants' information from immigration enforcement agencies.

But last week, DHS informed the government attorneys that statements it made in the case were "inaccurate in some instances and give the wrong impression in others," according to the filing.

However, the agency has continued to accept applications from these states and territories.

"Defendants deeply regret the foregoing inaccurate or misleading statements and apologize to the Court and plaintiffs for the need to make these corrections at this late stage in the litigation," the filing said.

It's unclear the extent to which the inaccurate claims played a role in the department's decision to lift a ban on New York. CNN reached out to DHS regarding the court filing.

The federal government's move in February to ban New Yorkers from the programs came at a time when President Donald Trump was railing against efforts by Democratic officials to limit cooperation between local and state law enforcement and federal immigration authorities.

Trump has made illegal immigration a prime target in his political career, at times threatening to take federal funds from so-called sanctuary jurisdictions and floating the possibility of releasing immigrants into sanctuary cities in part to retaliate against Democrats.

The move to ban New Yorkers from the Trusted Traveler Programs sparked outrage among lawmakers and state officials, who said the action was politically motivated, and prompted the state's Democratic attorney general and the New York Civil Liberties Union to sue the Trump administration.

Gov. Andrew Cuomo, a Democrat, said at the time that the move was "pure politics."

"It has nothing to do with affecting government policy or laws," he said.

In the spring, New York amended the law to allow information-sharing of DMV records "as necessary for an individual seeking acceptance into a trusted traveler program, or to facilitate vehicle imports and/or exports," according to the legislative text quoted by DHS.

"We appreciate the information sharing to CBP for the trusted travel program, which enables DHS to move forward and begin once again processing New York residents," acting Homeland Security Secretary Chad Wolf said in a statement.

But, Wolf added, "Nonetheless, local New York law continues to maintain provisions that undermine the security of the American people and purport to criminalize information sharing between law enforcement entities."

DHS said it is working with the Justice Department to determine next steps.

Cuomo said in a statement Thursday that he had met with Trump last winter on how to address the issue while protecting New Yorkers' privacy.

"Subsequently the matter was dealt with in the state budget passed in April," he said. "I am glad that this issue has finally been resolved for all New Yorkers."