Devoted Dads of the Amphibian World 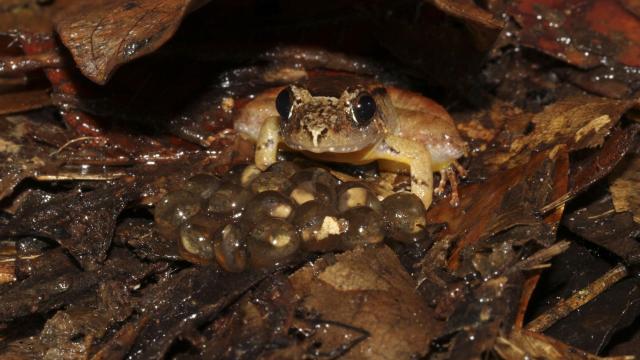 In many frog species, the males care for their young. But in a rain forest in Borneo, scientists have discovered a case of unusual paternal devotion. Male smooth guardian frogs scarcely move or eat for days while tending one clutch of eggs, and they seem uninterested in mating with more females. Once hatched, tadpoles clamber on the males’ backs to be ferried to pools of water.

“They are very good fathers,” said Johana Goyes Vallejos, a behavioral ecologist at the University of Kansas and lead author of the study, which was published online in the Journal of Natural History.

Among frogs, about 10 percent of known species take care of their young. Of that group, half to two-thirds of species rely on males to do the job. For instance, male parental care is common among the brightly colored Neotropical poison frogs of Central and South America. But in species that have been studied in detail, the males often continue to call to females and mate while tending eggs, and they spread their attention over several clutches.

Goyes Vallejos was drawn to the less glamorous smooth guardian frog: a brown, nocturnal creature about an inch long with back patterns that look like dead leaves. In the 1980s, researchers published two short reports of males “in direct contact” with eggs and carrying tadpoles, but since then, the obscure species had been mostly ignored. “I kind of wanted to go with the one that it seemed that nobody wanted to study,” Goyes Vallejos said.

To learn more about its behavior, she captured smooth guardian frogs in Borneo and allowed pairs to mate in glass terrariums. In 6 of 9 instances, the male attended to the eggs. (In the other three cases, eggs were unfertilized, or the male escaped and then ignored the clutch when he was returned to the enclosure.) Attending males spent most of their time stationed on or near the eggs and didn’t seem to eat unless insects or spiders walked right up to them.

“They just sit there," Goyes Vallejos said. “I had cameras running 24 hours, and sometimes I would think that they were broken because I couldn’t see any movement.” Males also did not call to females, suggesting they weren’t interested in mating.

After about 10 days, the male frog prodded the eggs, prompting the tadpoles inside to spin. Then he stepped on the eggs to break them. “It’s kind of like waking up the children to go to school," Goyes Vallejos said. “Everybody get out, we need to go!”

The hatched tadpoles climbed on the male’s back and arranged themselves neatly. Goyes Vallejos also encountered 10 males carrying their young in the wild.

The intensive care for eggs is “rather unusual,” said Eva Ringler, a behavioral ecologist at the University of Veterinary Medicine Vienna in Austria, who was not involved in the study. “They are super occupied with caring for this one single clutch.”

The species is unique in other ways, too. In a previous study, Goyes Vallejos and her team found that females initiate calls to males. Usually, female frogs of other species stay silent or call only in response. Female smooth guardian frogs also call more frequently than males do, and sometimes several calling females gather near a male.

The studies suggest that a rare phenomenon called sex-role reversal may be in play. In such species, females compete among themselves to mate with males, instead of the other way around — often because males are too busy caring for young. Scientists have seen the behavior in fish and birds, but no clear cases have emerged yet in frogs.

Adam Jones, an evolutionary biologist at the University of Idaho who was not involved in the study, said more key pieces of evidence would be needed to conclusively show sex-role reversal in smooth guardian frogs. Still, he said, among frogs “this is probably one of the best candidates.”

Gathering the data for the study wasn’t easy. Goyes Vallejos spent months searching the rain forest nearly every night for the camouflaged frogs. Sometimes, she thought, “I don’t want to go out tonight,” she recalled. “But then I would think, what if tonight is the night that I see something very cool?”