DeVos Punts to Congress on Federally Funded Guns for Schools 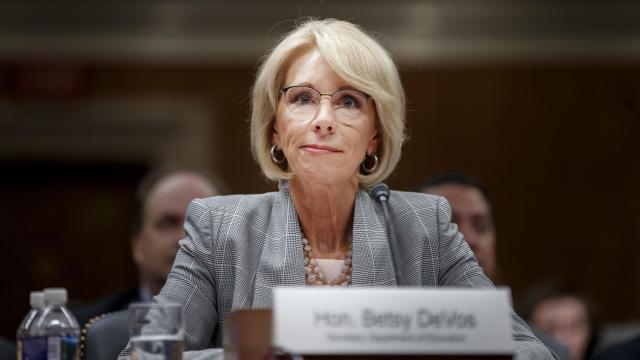 WASHINGTON — Education Secretary Betsy DeVos says she will leave it to Congress to decide whether states can use federal funds to purchase firearms for their schools, prompting congressional Democrats to launch a last-ditch effort to restrict those funds.

Conservatives said DeVos’ stance was consistent with her championing of local school control. But Democrats and advocates denounced her decision as a tacit endorsement of federally funded firearms in schools, and federal policy experts saw the move as an abdication of the department’s core function to help districts navigate the federal bureaucracy.

The Education Department had been considering whether school districts could tap into a $1 billion program intended for academic and enrichment programs after states asked whether school safety measures — including providing firearms and training — would be an allowable expense. But DeVos essentially punted the question back to Congress, which wrote the law that created the program but was silent on firearms purchases.

Congressional Democrats are planning to push for language in an end-of-year spending bill that would expressly prohibit the use of grant funds for guns.

On the House floor this week, Rep. Rosa DeLauro of Connecticut, the ranking Democrat on the appropriations subcommittee that funds the Education Department, urged negotiators to say what DeVos would not. “She should say that this money is not there for guns in the classrooms,” DeLauro said. “We must make the best of a bad situation. We need to ensure we advance the best policy under the circumstances.”

In a letter sent to Democratic lawmakers, DeVos wrote that she had “no intention of taking any action concerning the purchase of firearms or firearms training for school staff” with money allocated in the federal education law, the Every Student Succeeds Act.

DeVos’ response came after a week of public backlash following the revelation that Education Department officials for months had been weighing whether to allow states to use a grant program, called the Student Support and Academic Enrichment Program, or Title IV-A, to purchase guns. DeVos wrote that while the law allows states “substantial flexibility” to spend funding aligned with their local needs, “Congress did not authorize me or the department to make those decisions.”

Republicans have supported the department’s position that DeVos’ role is not to adjudicate existing law.

But Rep. Robert C. Scott of Virginia, who wrote a letter signed by more than 170 House Democrats asking DeVos to state her intent on the issue, disagreed. On Tuesday, he implored his colleagues to include prohibitions in the spending bill.

“In refusing to act, Secretary DeVos is setting a new and dangerous policy; the secretary is allowing funding to be used to arm teachers,” Scott said on the House floor. “She is now also pointing the finger at Congress, calling on us to clarify our intent. But Congress’ intent is already clear.”

Meanwhile, states are looking to stay out of the political crossfire in Washington.

Texas, which sent the initial inquiry for the Education Department’s consideration, said its state education department was no longer seeking to provide “any guidance to school districts on this issue.”

The retreat was not surprising to policy experts who said that local education leaders were being put in a precarious position. They turn to the Education Department for guidance — or what the department calls “technical assistance” — to ensure that they are meeting program requirements. The Education Department also monitors and audits the spending of federal grant funds, and in instances where they have been found out of compliance, districts have had to return money.

“In not clarifying what is and isn’t acceptable, it becomes harder to implement a program to a standard of success and compliance when you don’t know what you’re being measured against,” said Noelle Ellerson Ng, associate executive director for policy at AASA, the School Superintendents Association, which opposes the use of federal grants for guns. Efforts to add prohibitions in the Education Department’s budget may be an uphill battle, since key Republicans have been cool to the idea that Congress needs to clarify the law.

Sen. Lamar Alexander, R-Tenn., said that the federal grants give “states, not the U.S. education secretary, authority to spend federal dollars in a way that creates conditions promoting school safety.”

A spokeswoman for Rep. Virginia Foxx, R-N.C., chairwoman of the House Education Committee, said that she disagreed that prohibition language should be added. “We still think the best way to keep kids safe is to empower local school districts to do as they see fit,” she said.

More than 40 senators, led by Sen. Patty Murray of Washington, also sent DeVos a letter opposing the idea of allowing states to purchase firearms with the grants. Murray will also advocate prohibition language in appropriations legislation, a spokeswoman said.

Chad Wyen, superintendent of the Mad River school district in Ohio, which gives trained staff members access to firearms, said that so far, he had spent his $82,500 in federal Title IV funding for a teacher, a program that provides drug, alcohol and mental health screenings and treatment for seventh- and 12th graders, and “trauma-informed training.”

But he said he would welcome more flexibility to use federal funds for school safety. The school district has a small tax base, one of the lowest per-pupil expenditures in Ohio, and is 80 percent federally and state funded. The district’s startup costs for its trained “response team” was $35,000, which purchased 28 firearms, ammunition, insurance and safes. The recurring costs are about $18,000.

“It would be nice to have more flexibility, because if that could pay for training for response team and range time, that could save me $10,000,” Wyen said. “It would certainly be helpful to be a community like ours.”