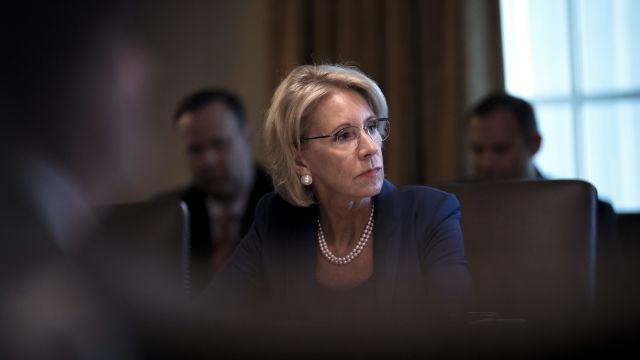 WASHINGTON — The Education Department is considering whether to allow states to use federal funding to purchase guns for educators, according to multiple people with knowledge of the plan.

Such a move appears to be unprecedented, reversing a long-standing position taken by the federal government that it should not pay to outfit schools with weapons. And it would also undermine efforts by Congress to restrict the use of federal funding on guns. As recently as March, Congress passed a school safety bill that allocated $50 million a year to local school districts but expressly prohibited the use of the money for firearms.

But the department is eyeing a program in federal education law, the Student Support and Academic Enrichment grants, that makes no mention of prohibiting weapons purchases. That omission would allow the education secretary, Betsy DeVos, to use her discretion to approve any state or district plans to use grant funding for firearms and firearm training, unless Congress clarifies the law or bans such funding through legislative action.

“The department is constantly considering and evaluating policy issues, particularly issues related to school safety,” said Liz Hill, a spokeswoman for the Education Department. “The secretary nor the department issues opinions on hypothetical scenarios.”

The $1 billion student support program, part of the Every Student Succeeds Act, is intended for academic and enrichment opportunities in the country’s poorest schools and calls for school districts to use the money toward three goals: providing a well-rounded education, improving school conditions for learning and improving the use of technology for digital literacy.

Department officials acknowledged that should the Education Department carry out the proposal, it would appear to be the first time that a federal agency had authorized the purchase of weapons without a congressional mandate, according to people familiar with the discussions. And while no such restrictions exist in the federal education law, it could undermine the grant program’s adoption of “drug and violence prevention,” which defines a safe school environment as free of weapons.

In its research, the Education Department has determined that the gun purchases could fall under improving school conditions, people familiar with the department’s thinking said. Under the current guidelines for that part of the grant, the department encourages schools to increase access to mental health counseling, establish dropout-prevention programs, reduce suspensions and expulsions and improve re-entry programs for students transitioning from the juvenile justice system.

But the department began exploring whether to expand the use of the support grants after the school shootings in Parkland, Florida, and Santa Fe, Texas, prompted states to inquire about alternatives. Department officials were considering whether to issue guidance on the funding before the start of the new school year but have been weighing the political and legal ramifications, according to people familiar with the discussions.

The proposal by the Education Department is almost certain to spur backlash. The Trump administration’s call to arm educators in an effort to prevent school shootings has faced overwhelming criticism from educators, lawmakers and law enforcement officials.

The measure would also break from decades-old practice in how funding is doled out for the purposes of school security.

Guidance for grants distributed by the Homeland Security Department that are intended for “school preparedness,” for example, notes that weapons and ammunition are not permitted. And after the Parkland shooting, Congress added a rule prohibiting the use of grants for firearms or firearm training in the Stop School Violence Act, under which the Justice Department will grant funds to school districts.

In weighing the proposal, the Education Department has also taken into account that school shootings were not a consideration when Congress passed the Every Student Succeeds Act in 2015, according to people familiar with the discussions. Three of the remaining architects of the law — Rep. Robert Scott, D-Va, and Sens. Lamar Alexander, R-Tenn., and Patty Murray, D-Wash. — have all opposed the idea of arming teachers.

The student support grant was created from funds from other programs that were collapsed in the Every Student Succeeds Act that addressed issues like mental health, violence prevention, bullying and harassment.

The Trump administration has twice moved to eliminate the grant program from its budget. But as Congress drafted a spending bill in the months after the Parkland shooting, advocates pointed to the program as emblematic of a successful approach to school safety. Congress instead increased funding for the grants by $700 million in the bill passed this year.

After the Parkland shooting, the Trump administration convened a federal commission on school safety, led by DeVos, to examine topics like mental and behavioral health resources, building security and the role of law enforcement in schools.

The commission has held several public hearings where educators and advocates from across the country have asked for expanded support staff and services, including school counselors, and additional security measures. Members of the commission have also visited school districts, like in rural Arkansas, where armed employees can be found at schools in areas not easily reached by law enforcement. The commission plans to issue recommendations by the end of the year.

In June, DeVos said the commission would not consider the role of guns in school shootings, but she later indicated that the panel would look narrowly at specific issues, including age limits for firearm purchases.

Last month, DeVos’ assistant secretary for the office of elementary and secondary education, Jason Botel, reiterated that point in a congressional hearing.

That prompted Rep. Donald Payne, D-N.J., to question the Education Department. In a letter to Botel, he asked if the department was planning to arm teachers.

But the department issued a statement saying that it did not plan to do so because “this is a function appropriately reserved for the states.”