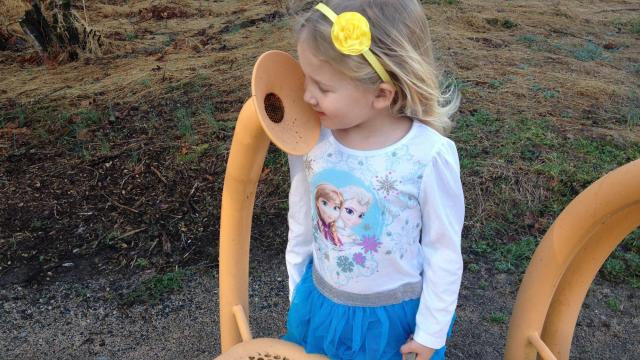 I like a good walk. Unfortunately, my younger daughter, who has the most time to explore with me, isn't a big fan of them.

I always need some kind of carrot-and-stick approach when I mention taking a little jaunt. Maybe a treat at the end. Or a playground. Or a chance to see a friend. Or some destination that will pique her interest - like walking to a playground, next to an ice cream shop where her best buddy will also be. That would blow her mind.

This week, I took my five-year-old and her friend over to the N.C. Museum of Art's amazing park. Spread across 160 acres, the park is dotted with large works of art. There are the giant circles that stand against the sky; the beautiful metallic pavilion; and the pond and lawns that my kids love to run around.

I'd been there many times with my kids, but, this morning, we were headed to a spot that we hadn't stumbled upon for whatever reason. Probably because we'd always stayed on the paved trail.

The Whisper Benches sit just down the hill from the pavilion, along an unpaved portion of the trail. They were created by Greensboro artist Jim Gallucci, who uses painted steel and architectural forms when he creates his art, according to the art museum's website. The benches sit on either side of the trail, but are linked underground by a hidden pipe that lets visitors whisper messages to each other while sitting on different sides of the path.

Yep ... if you've spent time on playgrounds lately, you'll know that this kind of feature is common. These are what some playground planners call "whisper phones" where you speak into one end under a slide, for instance, and a friend hears what you said at the other end over by the monkey bars. I also like to refer to them as "whisper-ma-phones," pulling from a line in "The Lorax."

I don't see them get much play at the playground. Here on the trail, however, they were a hit. As soon as my two little walking partners saw the yellow benches from the hill above, they started running (only to be sidetracked momentarily by the little bridge, which they also enjoyed, right before they got to the benches).

They pretty quickly figured out how it worked and then started whispering and shouting and whispering messages to each other. Then they'd run around the benches and try it again.

When I said "the whisper bench speaks," in a low, gruff voice into one end, they erupted in giggles. I had to do it about ten more times.

The benches were all wet when we got there, so there wasn't much of an opportunity to sit down and relax. But they sit in a spot that's surrounded on one side by a grassy hill and on the other side by a shady creek. I imagine this might be a nice place to set up a picnic or snack and hang out for a bit.

The benches are about a half mile from the lower parking lot near the museum's East Building. We got there early before the museum opened. There were plenty of parking spaces. Bathrooms are open inside the museum, where admission is free, during operating hours.