Destination: Afternoon teas in the Triangle 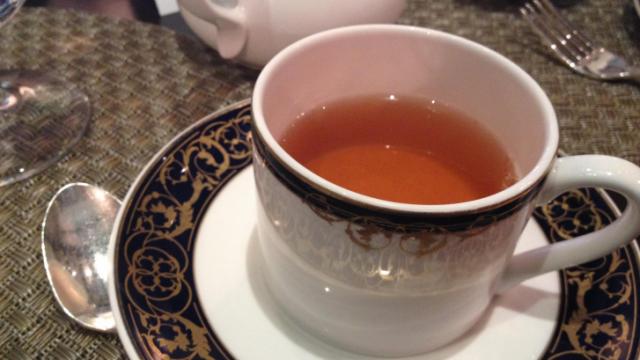 I came to love a good afternoon tea while living in London after graduating from college (more years ago than I care to admit).

For the first part of my stay, I spent my mornings working at a Starbucks-like coffee shop, a novelty to the British at that time. My weekends were spent traversing the English countryside, often enjoying a scone and tea in some quiet shop in the middle of nowhere. It was as much about filling my belly as it was about sitting and just enjoying the time and place. I'd usually have a good book with me.

I still love tea and have encouraged my daughter's enjoyment of the herbal, fruity varieties. They are ages 9 and 5 now. Sometimes, we'll sit down with a cup on cold afternoons.

But I hadn't explored the Triangle's tea scene until last month when a combination of circumstances led me to try tea at three spots in the region. My girls and I celebrated my mother-in-law's birthday at The Carolina Inn in Chapel Hill. The Washington Duke Inn in Durham invited me to sample their tea menu to promote their fall and holiday offerings. And my girls and I marked an early birthday for my mother at the Olde English Tea Room and Gift Shoppe in Wake Forest.

Of course, there are other places to enjoy afternoon tea here. Herons at The Umstead in Cary offers regular teas, including daily servings during the holiday season. La Residence in Chapel Hill offers occasional teas. And the Weathervane at A Southern Season in Chapel Hill has tea on the second Tuesday of each month.

Here's a round-up of Triangle-area afternoon teas. Reservations are recommended in advance for all of them.

Our table for this Saturday afternoon tea was in the lobby of this historic inn, which is owned by the University of North Carolina at Chapel Hill. It wasn't exactly an intimate setting. There were at least three weddings scheduled at the inn when we were there. The lobby was filled with wedding guests, wedding parties and the brides and grooms, themselves.

The bustling lobby was perfect for my crew, which included my kids. They had plenty to look at and talk about while we sipped and ate. Afterwards, we peeked at the wedding ceremonies. (Wow, do brides look young to me these days!).

The service was beautiful. We sat down to a table, draped in white, with a collection of tea cups before us. My girls ordered pink lemonade, which came in teapots, including one shaped like an elephant. I chose an orange spice variety. My mother-in-law went with a blueberry blend.

Small, warm scones came wrapped in a basket, along with the traditional Devonshire cream, jam and lemon curd. A three-tiered tray included goodies such as a biscuit with cheese, carrot cake and chocolate covered strawberries. We ordered the princess tea for my girls, who got their own plates of peanut butter and jelly and grilled cheese sandwiches in addition to the goodies and sandwiches that the adults were served.

Let me say that again: For $15, my kids got not only got peanut butter and jelly and grilled cheese sandwiches, they also got all of the food that the adults were served. I loved that they were able to try everything that we were offered, but also had some options that they were more familiar with. The Carolina Inn, by far, is my favorite for its service to kids.

The classic tea at The Carolina Inn, which is what we ordered, is $25 per person. The Little Prince and Princess Tea for ages 4 to 12 is $15. Afternoon tea is served from 2:30 p.m. to 4:30 p.m., Thursday to Sunday. The inn also offers special holiday events.

The inn on the campus of Duke University invited me and other local bloggers and food writers to afternoon tea last month to promote its holiday offerings. The Fairview Dining Room offers everything from a Thanksgiving holiday buffet to holiday teas and Christmas Eve and Christmas Day meals.

The inn brought in Constance Lue, founder of the Old North State Tea Society, to share all sorts of afternoon tea facts. For instance, she told us that it's best to put the cream and jam on bite size pieces of your scone instead of spreading it out across the entire piece.

Here, tea is served in the elegant Fairview Dining Room, which probably is a quieter setting than The Carolina Inn lobby. The staff brought out a three-tiered tea tray bedecked with deviled eggs, cucumber sandwiches and a fig jam sandwich that was absolutely delicious.

The sweets were yummy too - brownies, chocolate covered strawberries, lemon bars and a fruit tart. And then came the scones, with clotted cream, jam and lemon curd.

Let's just say that I didn't need to eat any dinner that night.

Jason Cunningham, the executive chef and a father of three boys, shares that they can customize tea for kids. When young children are at tea, the inn can switch out some of the tea sandwiches for items such as peanut butter and jelly, Nutella sandwiches and Ants on a Log with raisins and either cream cheese or peanut butter.

This spot in downtown Wake Forest reminds me of some of the cozy, homey tea rooms that I spent hours in back in England. This isn't a high-end hotel, but more of a small town restaurant with a lot of charm. You don't even need to come dressed for tea here. At the door, you'll find hats, scarves, jewelry and other accessories to don for the occasion.

The Wake Forest tea room seems to have a lot of fans. One room was filled with a private party when we were there. And most of the tables were filled with mostly women and girls enjoying their afternoon tea in the other room.

I took my mom and girls here for an early birthday celebration. My mom, older daughter and I chose the afternoon tea, which includes tea sandwiches, desserts and scones. My younger daughter went with the Wee Tea, which included her choice of sandwich and dessert.

The food here is comfortable and familiar - chicken salad on croissants and egg salad on white bread, for instance. The treats included cake balls, snickerdoodles, biscotti and, of course, that chocolate covered strawberry.

The scones were bigger and more cake-like than the ones at The Carolina Inn or Washington Duke Inn. When we were there, there were two scone options - pumpkin or raspberry white chocolate.

The tea room has a small gift shop right next to the main dining room and antiques in the basement. After tea, we spent the rest of the afternoon wandering downtown Wake Forest, popping in the other antique and gift shops. It was a lovely afternoon.

The Olde English Tea Room is the cheapest afternoon tea option in the region. The price is $16.95 for afternoon tea and $10.95 for the Wee Tea, which is for ages 10 and under. It's open Monday through Saturday and closed on Sunday.

I have not been to tea at The Umstead yet, but I've eaten at the restaurant several times, including with my older daughter. The food and service, as you might expect from a place that has Five Stars from Forbes Travel Guide and Five Diamonds from AAA, are fantastic. It's also the most expensive option here.

But, if your wallet can afford an occasional splurge, I find the place incredibly kid friendly with great menu options for young diners. My older daughter will never forget the time and attention they gave her when I took her to brunch a couple of years ago. She ordered a dessert that included five types of ice creams and sorbets. She asked if she'd get five spoons with it. When they brought out the dish, the server artfully placed an individual spoon at each scoop.

Afternoon tea is served in the hotel's lobby lounge with accompaniment from a harpist. It's served from 2:30 p.m. to 4 p.m., Wednesday through Sunday, with 24-hour advanced reservations. From Thanksgiving to Christmas, it's served daily.

Afternoon tea at The Umstead is $32 per person. There are menus for both adults and children. Tea sandwiches on the adult menu include delicacies such as asparagus and Prosciutto and house smoked salmon gravlax. For kids, tea sandwiches include cookie butter and roasted pear and cinnamon toast with apple butter. Sweets include macaron, pastry and more.

Other options for tea in the Triangle include La Residence in Chapel Hill, which offers holiday and special event teas, including some in December. And The Weathervane at A Southern Season in Chapel Hill offers tea on the second Tuesday of each month for $19.