New guidance might come soon for people who have been fully vaccinated for Covid-19, Fauci says 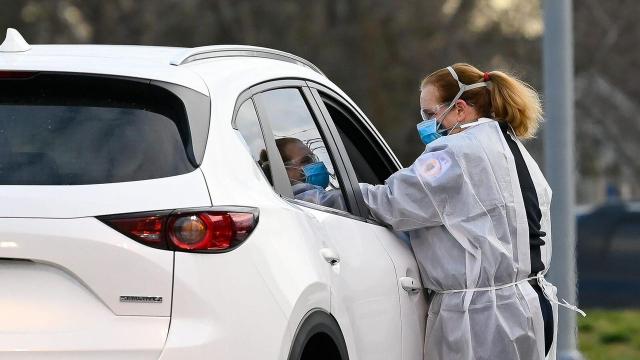 CNN — As of now, even if you have been fully vaccinated for Covid-19, the advice from health officials is to keep wearing your mask, keep social distancing and keep away from get-togethers.

But Dr. Anthony Fauci said Monday there might be new guidance coming soon.

Fauci, the White House pandemic adviser, was speaking at a meeting of the American Association for the Advancement of Science when 91-year-old Esther Cohen asked him when she and her friends -- who all have received both vaccine shots -- can safely resume their mah-jongg games.

Fauci, the director of the National Institute of Allergy and Infectious Diseases, said there is no CDC guidance on what to do when groups of people who have received both vaccine doses want to get together. Current CDC advice is to keep wearing a face covering and staying 6 feet from others when possible.

"But I believe that's going to change," Fauci said. "We're talking about this at the level of the CDC."

Vaccinations began in the United States on December 14. More than 9.5 million people have been fully vaccinated with two doses of a Covid-19 vaccine, according to CDC data updated Monday.

If you are asymptomatic, you would still test positive for Covid-19, and even if you are vaccinated, you could still spread the virus. That's why the guidance now is that even the vaccinated still need to wear masks. A person could be an asymptomatic carrier and have the virus in their nasal passageways, so when they are breathing or speaking or sneezing they could still pass the novel coronavirus on to others.

Fauci said that he and his daughter, who have both been fully vaccinated, still follow the standard social distancing and quarantine guidelines before seeing each other.

"What's the reason to get vaccinated in the first place, if you don't want to get to normal?" he said.

The US has ramped up its genome sequencing efforts in the hunt for coronavirus variants, US Centers for Disease Control and Prevention Director Dr. Rochelle Walensky said Monday.

"Over the last three weeks or so we've increased our sequencing about tenfold," Walensky said during a White House briefing. "So as we look more, we certainly anticipate we might find more" variants.

The US effort in genetic sequencing lags far behind many other developed nations. One analysis ranked the US 33rd in the world for sequences per 1,000 cases of Covid-19.

Scientists search for coronavirus mutations by taking samples of the virus from patients' nasal swabs and analyzing their genetic sequences.

Mutations are changes in the genetic code of a virus that occur naturally over time when an animal or person is infected -- and such mutations can lead to the emergence of new variants.

"We anticipate that we're probably going to be sequencing up to three to four more than we are already sequencing," Walensky said.

"I think once we have more sequencing that's happening, we'll have a better idea as to how many variants there are and what proportion are out there."

Walensky said during the briefing that she was "reluctant" to provide an estimate of how many coronavirus variant cases there could be based on the current data. She also warned that variants could reverse encouraging declines in Covid-19 statistics.

Walensky said an average of 119,900 new cases were reported between January 31 and February 6 -- a drop of nearly 20% from the prior week. New Covid-19 hospitalizations dropped about 17% from the week prior, she said.

"The continued proliferation of variants remains of great concern and is a threat that could reverse the recent positive trends we are seeing," she said.

Right now 699 variant cases have been confirmed across 34 states -- 690 of the variant first discovered in the United Kingdom, she said.

Experts say the highly contagious UK variant will likely soon become dominant in the US, and a new study found significant community transmission may already be occurring.

On Sunday, the US surpassed 27 million reported infections and more than 464,000 have died, according to Johns Hopkins University data. More than 32.3 million Americans have so far received at least their first dose of either the Pfizer or Moderna vaccine, according to CDC data, as officials work to increase vaccinations across the country.

And a third vaccine could be on its way to the US market soon: Johnson & Johnson asked the Food and Drug Administration for an emergency use authorization of its vaccine last week.

Decline in nursing home cases could be related to vaccinations

New Covid-19 cases among nursing home residents and staff have dropped more than 50% in about four weeks, according to a CNN analysis of the latest data published by the US Centers for Medicare and Medicaid Services.

A separate analysis by the American Health Care Association and National Center for Assisted Living found that cases have dropped twice as fast in those nursing homes that vaccinated residents and staff.

The AHCA/NCAL analysis, published last week, assessed 797 facilities that held vaccination clinics in the federal Pharmacy Partnership for Long-Term Care Program between December 18 and 27 and 1,709 facilities in the same set of counties that did not have a clinic in that time.

"The decline in new cases three weeks after the first dose, compared to facilities having vaccine clinics later, is encouraging and signals that the vaccine may decrease the spread of COVID, a finding not shown in the trials," said Dr. David Gifford, chief medical officer for AHCA/NCAL.

Gifford said additional data is needed to verify the reason behind the decrease.

"If verified with additional data, this could expedite the reopening of long term care facilities to visitors, which is vital to residents' health and well-being," he said.

Race to get people immunized

With the potential for more infectious variants to become dominant, officials are trying to get more people vaccinated quickly.

The pace of vaccinations across the United States has picked up, according to the CDC. In the past seven days, an average of more than 1.5 million people have received vaccine shots each day.

Many communities have increased the number of places people can get shots. In Florida, Gov. Ron DeSantis announced a plan to vaccinate seniors who are veterans of the 1961 Bay of Pigs invasion in their homes.

"We are inspired by folks that have been willing to stand up and fight for freedom," DeSantis said.

The move expands the state's program to vaccinate homebound seniors, which began recently with Holocaust survivors.

"We're not going to rest until every senior that wants a shot gets a shot," DeSantis said.

What it will take to reopen schools

Mitigation measures will play an especially key role in helping schools safely reopen, an expert said Sunday, as the CDC is expected to soon release guidelines on how schools can open during the pandemic.

Dr. Scott Gottlieb, former FDA commissioner, told CBS that when it comes to reopening schools, "the prerequisite is putting in place mitigation steps ... "

He noted that when people wore masks and stayed socially distant, there was "very little transmission within the classroom."

And while it would be good to prioritize teachers for vaccines, he said, "I don't think it's necessarily a prerequisite. I think schools have demonstrated that they can open safely if they've taken precautions in the classroom."

About 62,000 New York City middle school students who opted for in-person learning will be returning to the classroom February 25, according Danielle Filson, a spokeswoman for the city's education department. Teachers and staff will return the day before to prepare.

Those teachers returning to the classroom are being prioritized for vaccine access at city hubs from February 12 to 21 and over midwinter recess, said Education Chancellor Richard Carranza.

US Rep. Ron Wright has died after contracting coronavirus and being hospitalized, his congressional office said Monday.

The 67-year-old Texas Republican is the first sitting member of Congress to die after contracting Covid-19. In December, Rep.-elect Luke Letlow died after being diagnosed with the disease.

The statement from Wright's office on Monday noted that the congressman has also battled cancer. Wright had represented Texas's 6th Congressional District since January 2019.