DEQ: Water rules may not be working 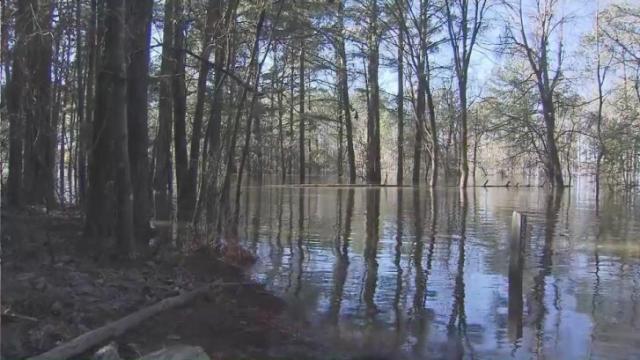 Raleigh, N.C. — A top state environmental regulator told state lawmakers Wednesday they should consider easing some of the state's water pollution rules because it's unclear whether they're working as intended.

Deputy Environment Secretary Tom Reeder told the Environmental Review Commission that the Department of Environmental Quality is looking at regulations that govern buffers around smaller streams, as well as laws requiring the reduction of nutrient runoff into Falls and Jordan lakes.

The state has been directed by federal regulators to reduce runoff into those "impaired" lakes because they exceed limits for "total maximum daily load" of nutrients such as nitrogen and phosphate, leading to high levels of chlorophyll-A, a type of algae. More stringent rules for Falls Lake are due to take effect in 2021, while the Jordan Lake Rules have been largely delayed since 2007.

Reeder said local governments and private citizens have spent millions so far to reduce pollution from "point sources" such as water treatment plants as well as "non-point sources" such as runoff from residential or agricultural property. But he said there's no clear evidence that the efforts are having the intended effect.

"They have to do that because there's too much algae in the lake in the summer, lakes that we knew were going to be impaired," he said. "Everybody knew it. The federal government knew it, North Carolina knew it, we all knew that these lakes were going to become heavily nutrified once we closed the dams.

"So, we're going to spend a couple billion dollars trying to get that algae out now," he said. "Is it going to work? I hope so, but the science would indicate probably not."

Reeder presented data from the Neuse and Tar-Pamlico basins that show little change in phosphorus and nitrogen levels after runoff and buffer rules were implemented. He also referenced a General Accounting Office report showing that 80 percent of impaired water systems around the country are struggling to meet their required reductions in nutrient runoff as well.

"I don’t know if the technology exists today to actually resolve these problems," he told lawmakers. "There’s not a lot of successful examples out there we can follow.

"Do we want to continue down this track of spending money when we don’t know what the outcome's going to be and, based on the examples of the Neuse and Tar-Pam, it doesn’t look like it’s going to work?" he asked.

Reeder also referred to his data to recommend that lawmakers rethink the 50-foot buffer requirement for smaller, so-called "intermittent" streams – streams that have water in them sometimes but not always.

State law requires that the first 30 feet of buffer outward from a stream's edge be left largely in its natural state. The next 20 feet can be "managed vegetation."

"When you put these 50-foot buffers, you’re actually laying claim to a lot of land," he told lawmakers. "I don’t see any kind of effectiveness that we can trace to these buffers."

The regulator told the panel that buffers are "very controversial" and have "caused a lot of heartburn" for property owners.

"We do a lot of things in North Carolina that other states wouldn’t touch with a 10-foot pole. If we’re going to put our citizens under this, then we better make danged sure that they’re actually working the way we thought they would work," he said. "I don’t want to be responsible for telling people what they can do on their private property if that’s not really necessary."

Rep. Pricey Harrison, D-Guilford, a longtime advocate for buffers, noted that, since their implementation, the state hasn't seen any more of the massive fish kills it witnessed in the Neuse River in the 1990s. She asked Reeder whether changing runoff regulations would make the state non-compliant with the federal Clean Water Act.

"What could the EPA do, anyway, because it’s not working anywhere?" Reeder answered. "If they could show us an example of what works, I’d be happy to do that. The EPA doesn’t know what to do either."

Groups representing local governments and businesses spoke in favor of reforming the water rules. Upper Neuse River Basin Association director Forrest Westall urged lawmakers to reconsider the science behind the Falls Lake Rules, which require what he called "extraordinary" reductions in runoff nutrients. While he said progress has been made, he added that buffers "have caused a lot of friction in our citizens over use of land."

Westall encouraged the panel to seek a change in the lake's federal regulatory standard to its "intended use."

"That lake is being fished today, it's being swum today, it's providing drinking water to a half million people – it’s meeting its intended uses," he said. "The question is, are the excess algae causing an issue?"

But environmental advocates warned against easing the rules.

While Tom Bean with the North Carolina Wildlife Federation compared relaxing the rules to taking off a seatbelt while driving, Upper Neuse Riverkeeper Matthew Starr was more blunt, calling Reeder's conclusions about the Neuse and Tar-Pamlico basins "grossly inaccurate."

"What he’s not including is the [nutrient] loading from the hog industry and the poultry industry. What would that look like if the stormwater controls weren’t there?" Starr said. "The science overwhelmingly shows that buffers and intermittent streams are very important to the water quality downstream."

Starr also noted that some algae can be toxic, such as the cyanobacteria bloom in Lake Erie that shut down Toledo's water supply system in August 2014. Runoff regulation, he said, "is not there to remove nutrients. It’s there to protect drinking water for half a million people."

The runoff rules haven't been fully implemented, he said, so "We haven't gotten to the point where we're going to be the big change."

"I’m supportive of the argument that the TMDLs [regulatory limits] for the Tar-Pam and Neuse probably weren’t done correctly," he said. "But [Reeder] doesn’t want to open them up and do them correctly. He wants to do away with them, and that would lead to an exponential decrease in water quality."