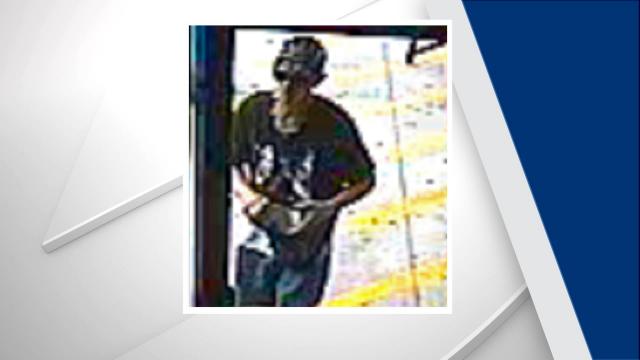 Fayetteville, N.C. — The Cumberland County Sheriff’s Office is searching for a man in connection with an armed robbery that occurred last month.

Authorities said a resident was sitting inside his home in the 7300 block of Ramsey Street on June 8 when he noticed a man was inside his carport and carrying his backpack leaf blower.

Deputies said the resident exited his home to confront the man, who then pulled out a rifle and ordered the resident to get on the ground.

The man then took a cellphone and wallet from the resident before walking towards Ramsey Street with the resident’s leaf blower, authorities said.

On June 9, the man was captured on surveillance cameras using one of the resident’s credit cards at a Speedway on Owen Drive.

The man is described as being white with a scruffy beard. He is about 5 feet, 7 inches tall and was wearing a dark-colored bandana, sunglasses and a dark colored shirt.

Anybody with information is asked to call the Cumberland County Sheriff’s Office at 910-483-8477.