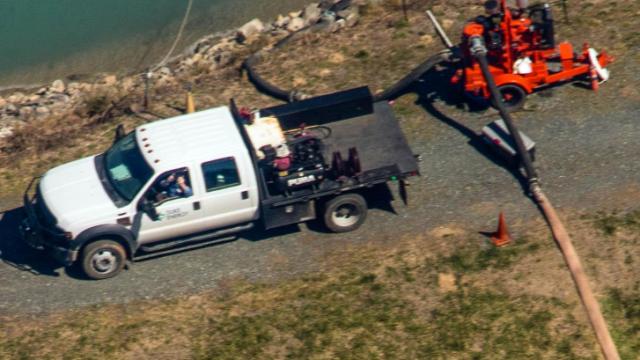 Raleigh, N.C. — State regulators on Thursday cited Duke Energy for pumping an estimated 61 million gallons of wastewater from coal ash ponds at a retired power plant in Moncure into a tributary of the Cape Fear River.

The state Department of Environment and Natural Resources can levy fines for illegal discharges but it must first give Duke 30 days to respond to the citation.

Advocates with the environmental group Waterkeeper Alliance released aerial photos Monday showing Duke workers pumping water from a coal ash pond into a canal that feeds a stream that flows into the Cape Fear River.

Duke officials don't dispute they were pumping the water, but they say they were allowed to do so for maintenance work under permits for the pond.

DENR officials said the pumping went beyond what was needed for maintenance.

“We were notified by phone in August that Duke Energy intended to conduct routine maintenance work at these ash ponds,” Tom Reeder, director of the state Division of Water Resources, said in a statement. “The state’s investigation revealed that the pumping activities ongoing at this plant far exceeded what would reasonably be considered routine maintenance.”

The pumping bypassed vertical spillways that allow more concentrated ash – the toxic material left after coal is burned for fuel – to settle to the bottom of the pond and lowered the level of the ponds so much that the impoundments no longer properly function as treatment systems, DENR officials said.

Logs kept by the company show that Duke pumped periodically from one ash pond since September and from a second ash pond since January, DENR said. The agency used the logbooks and aerial photos to estimate the amount of wastewater pumped into the canal.

DENR inspected the Moncure ash ponds in December, when a worker noticed parts of a disconnected pump sitting next to one ash pond. At the time, Duke told the inspector that it planned to do some maintenance, but DENR officials said the utility didn't mention it had already been pumping for months.

State inspectors revisited the site on March 11, and the pumps were still set up but weren't operating at the time. The pumps have since been removed, DENR officials said.

Regulators have stepped up inspections of coal ash ponds in the wake of a Feb. 2 ash spill from a Duke plant near Eden that fouled 70 miles of the Dan River. DENR is trying to collect as much information as possible to guide its future decisions on how the handle ash ponds, officials said.

Officials have notified downstream cities of the illegal pumping and are collecting water samples from the Cape Fear River for testing. None of the cities downstream have reported problems meeting federal drinking water standards.