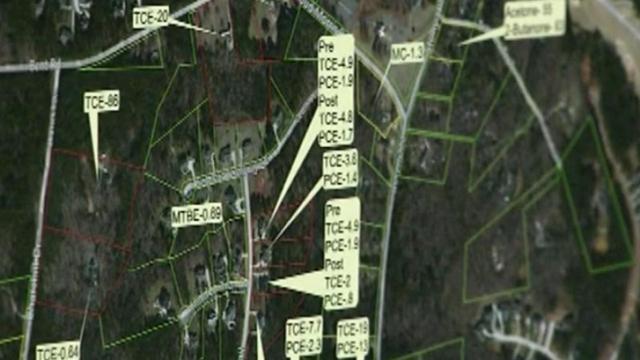 Wake Forest, N.C. — Two small circuit board assembly companies who were formerly located on Stony Hill Road near Wake Forest are likely responsible for contaminating the well water at 21 nearby homes, the North Carolina Department of Environment and Natural Resources said Wednesday.

DENR officials, along with representatives from the Environmental Protection Agency, met with dozens of concerned homeowners Wednesday to discuss their investigation.

"Everyone is looking for more answers," said John Roth of the Stonewalls Homeowners Association. "They want to make sure what they are consuming is safe."

Since the EPA started its investigation in July, at least 21 homes have tested positive for the presence of TCE – a cancer-causing cleaning agent used to get rid of grease – in well water. Twelve of those homes had dangerous levels of the contaminant.

Letters obtained by WRAL News reveal that DENR warned at least three possible developers about an "inactive hazardous site" in the area between 2008 and 2010. Residents, however, said they were never made aware of any potential contamination and have been drinking well water for years.

DENR first became aware of contamination in 2005, but tests determined that it was contained to one well at 7305 Stony Hill Road and was not a widespread concern.

The companies were not named, but DENR officials said they have been working for years to make the polluters foot the bill for fixing the problem. Roth said he is considering a class action suit against the companies responsible.

Cleaning up contamination groundwater can be a lengthy process. In the meantime, the EPA is working out plans to supply affected homes with clean drinking water.

The Hasentree subdivision off Stony Hill Road has a community well that tested negative for any contamination. It is one of several community wells in the area that could be used as a clean water source for people affected by TCE pollution.