Raleigh, N.C. — In the 24 hours after the NCAA cost North Carolina tens of millions of dollars by canceling championship events scheduled in the state, Democrats lawmakers called for a special legislative session to repeal House Bill 2 and stop the bleeding.

"Whenever legislative bodies rush to judgment on important public policy decisions, there are unintended consequences," she said in a statement. "I do not want men or boys legally to be able to share the same locker rooms or bathrooms with my 16-year-old daughter and her classmates or teammates. However, if we want to preserve the proud heritage of North Carolina, it is time for our leadership to consider a substantial and immediate repeal of HB2."

The NCAA said that it would relocate seven championship events from North Carolina to other states based on the organization's commitment to an "inclusive atmosphere for all college athletes, coaches, administrators and fans." It was a long-in-coming move predicated by the passage of House Bill 2, which bars cities and counties from passing laws that protect gay and transgender people from discrimination and which requires transgender people to use bathrooms in schools and other public buildings that correspond to their birth gender.

North Carolina was to host:

Costly losses across the state

Greensboro leaders estimated that the first two rounds of the men's basketball playoffs would have brought $17 million to the city. Cary estimates the loss of the men's and women's soccer championships at $2 million.

"I’m saddened to see the loss of these games, but the writing has been on the wall for quite some time," said Rep. Chris Sgro, D-Guilford, the director of LGBT advocacy group Equality NC.

More losses could be on the way.

The Atlantic Coast Conference is expected to decide this week whether to pull its events out of North Carolina as well, including its baseball tournament, which has two more years on a four-year contract with Durham Bulls Athletic Park.

The PGA hasn't decided yet whether to move its events as well.

The NCAA is in the process of reviewing bids to host its events for the next four years, including tens of millions of dollars in bids from the Triangle.

"If we don't fix this now – and I say it is urgent now – and bring North Carolina back to the table in consideration of these tournaments, we're going to feel the direct impact of HB2 for years to come," Woodard said.

In a statement late Tuesday afternoon, Gov. Pat McCrory, instead of mentioning the role of the state legislature in putting the law in place, pointed to the federal government for a solution.

"The issue of redefining gender and basic norms of privacy will be resolved in the near future in the United States court system for not only North Carolina, but the entire nation. I strongly encourage all public and private institutions to both respect and allow our nation’s judicial system to proceed without economic threats or political retaliation," he said. "Sadly, the NCAA, a multi-billion dollar, tax-exempt monopoly, failed to show this respect at the expense of our student athletes and hard-working men and women."

Sgro pointed the finger back at McCrory.

"The fault lies with the lieutenant governor, the governor and legislative leadership for enacting and signing the worst anti-LGBT legislation in the entire nation," he said. 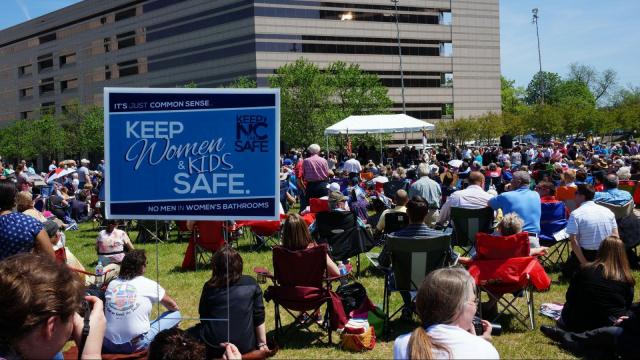 House Bill 2 has been a political hot button since its passage, with most Republicans framing at a necessity to protect women and children from predators and most Democrats calling it discriminatory toward the LGBT community.

Republican Lt. Gov. Dan Forest, who has been a vocal supporter of the law, said Democrats are using it to challenge a successful administration.

"This is the political third rail. We have shored up the economy. We’ve created a good, solid, level playing field in the economy in North Carolina right now. We’ve done a lot for education in North Carolina, and so our opponents don’t have a leg to stand on," he said.

He also returned to his talking points about public safety, prioritizing it over the need to kowtow to those who do business in the state.

Sgro challenged that viewpoint, saying, "There’s no data that backs up the governor’s fear-mongering around HB2 and the trans community. There’s plenty of data that says trans youth are at risk and the economy is at risk because the governor signed such a discriminatory piece of legislation."