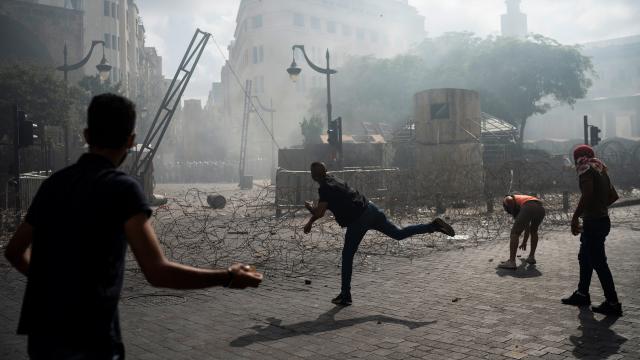 The foreign ministry, the environment ministry and the economy ministry were occupied by angry demonstrators who called for the downfall of Lebanon's ruling elite five days after a blast ripped through the Lebanese capital causing widespread destruction.

The Banking Association, which protesters blame for the country's worsening banking crisis, was also taken over by protesters and set ablaze.

Diab said he would introduce a law calling for early elections and said he would remain in government for two months until major parties can reach an agreement.

Police fired tear gas and rubber bullets as protesters hurled stones and fireworks at security forces. Parts of the central district were set ablaze and when the protesters took over the Foreign Ministry, the first in a succession of popular takeovers, they declared it the "headquarters of the revolution."

Tens of thousands of demonstrators poured into Beirut's Martyr's Square on Saturday afternoon calling for "revenge" against the ruling class of politicians widely held responsible for the explosion that lay waste to large swathes of Lebanon's capital.

The air was thick with tear gas as people filled the main protest site, with the demonstrations stretching to surrounding neighborhoods and the city's main motorway, in the biggest protests since a nationwide uprising last October.

The US embassy in Beirut voiced support for peaceful protesters. "The Lebanese people have suffered too much and deserve to have leaders who listen to them and change course to respond to popular demands for transparency and accountability," the embassy tweeted on Saturday night. "We support them in their right to peaceful protest, and encourage all involved to refrain from violence."

One member of the Lebanese security forces has died. More than 200 people have been injured in the protests, including 63 who were transferred to hospitals, according to the Lebanese Red Cross. Several journalists are among the injured.

The security forces' response did not appear to disperse many of the angry protesters. One woman who fell over as she stumbled over people running in her direction, said: "They bombed our city. I will go back in." Her face soaked with tears, she picked up her belongings, as well as some stones, and headed back into the crowd.

"You survive an explosion in Beirut only to be teargassed," said one man in his 20s as he held an onion to his mouth to mitigate the effects of the gas.

Parts of the demonstrations remained peaceful, while other parts were predominantly filled with angry protesters who faced off with security forces.

"We are in trouble here because on one hand, protesters are burning buildings and if I send the fire trucks to put the fire out, I am afraid protesters might attack and hurt the police and fire fighters," Beirut Governor Marwan Abboud told CNN. "On the other, however, I cannot just not send the police or the fighter fighters."

Abboud was heckled and chased out of a damaged neighborhood by protesters earlier in the day.

The demonstrators erected mock gallows in what were dubbed "Judgment Day" protests, as grief gave way to anger after more than 154 people were killed and dozens more remain missing. Over 5,000 people have been injured.

Effigies of prominent political leaders, including former Prime Minister Saad Hariri and Hezbollah chief Hassan Nasrallah, were hanged from nooses, in some of the most explicit signs of public outrage the country has seen in years.

Protesters held signs reading, "Here is where the nooses should be hung." The mock gallows have become a key symbol of the demonstrations, which are demanding that those responsible for the Tuesday's blast are held accountable, as well as against corruption and mismanagement of the country.

The gallows were erected in the same place where several people were hanged more than 100 years ago by the then ruling Ottoman Empire for revolting against Istanbul. The Martyr's Square statue commemorates those executions.

Protesters scaled the walls that have sealed off Beirut's Nejmeh Square, where Lebanon's parliament stands, for months, and attempted to tear the barricades down.

In one video, soldiers were seen taking cover in archeological ruins as protesters threw rocks at them.

Thousands of tons of ammonium nitrate are linked to Tuesday's catastrophic explosion in Beirut's port. Multiple government agencies in Lebanon were repeatedly warned about the substance, described by an analyst as a "floating bomb," CNN learned.

"We were born and raised with this regime in place -- we believe it's time for it to go especially after the last explosion," said 18-year-old protester Dana Itani. "These politicians deserve to be hanged here, they deserve even worse honestly."

"I lived the civil war. I was displaced, lived harsh days and we already lost houses in the war. We thought that was it," said Hayat Gharazeddine, 51. "These days however are worse than war. You have no idea how you might die now, which is the most scariest thing."

"I wish I could hang them myself," she added.

Some protesters occupied a Foreign Affairs Ministry building in eastern Beirut, unfurling a large banner over its severely damaged structure that called for the disarmament of Hezbollah, the Iran-backed Lebanese armed group and political party, according to Lebanese TV channel LBCi.

One of the demonstrators declared the building the "headquarters of the revolution," through a megaphone.

Lebanon was already embroiled in an economic meltdown prior to Tuesday's blast which obliterated its main port, destroying grain silos. The international community has already sent emergency medical and food supplies to the country and are pledging tens of millions of dollars in funds.

Tuesday's disaster may have also brought the country's political crisis to a tipping point. Since a popular uprising in October toppled the government of former Prime Minister Saad Hariri, public disgruntlement against the ruling political class has been rampant, accelerating a financial crisis that is one of the worst the country has ever seen.

Five members of parliament have resigned in protest, in addition to some high-profile official resignations. Authorities have detained 16 people in connection with the blast, including Director General of Lebanese Customs, Badri Daher, the head of Beirut Port, Hasan Kraytem and the former head of customs Chafic Merei.