Demonized or Celebrated, Pelosi Stands Firm and Refuses to Agonize 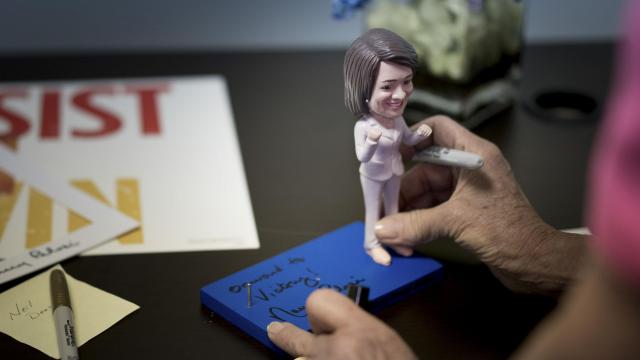 CAMBRIDGE, Mass. — This is what it’s like being Nancy Pelosi:

Republicans are running ads against you again, morphing your face into a monster mask of a big-spending, amnesty-loving San Francisco liberal. Democratic candidates are running from your leadership, declaring it time for a new generation in Washington even as they welcome endorsements from Joe Biden, who has been around nearly two decades longer.

David Hogg, the chiseled-jaw face of the teenage Parkland shooting survivors, lectured you about Harvey Milk and social activism — “Yes I know; he was my friend” you replied, with your Catholic school manners — and told New York magazine you were “old.”

Now comes a young Harvard man, a graduate student, turning your exhortation on the power of public sentiment back on you — you have just quoted Abraham Lincoln — to ask about the Democrats “running on a platform of not supporting you.”

“How does one deal with this negative public sentiment, and reorganizing your coalition and bringing them back under your leadership and support for you?” he says in front of the standing-room crowd at the John F. Kennedy School of Government here.

Pelosi, the only woman to ever be speaker of the House, replies that she has been opposed in previous bids for leadership; it’s the vitality of the Democratic Party; she thrives on it. The audience applauds, but she pushes on: “I say this especially to women, because they think women are going to run away from a fight, but you can’t do that.”

“Know your power, know your why, know your what, know your how, connect with your voters and people who are supportive, those you wish to convince,” she adds, then pauses. “But don’t let them think you are running away.”

In South Florida two days later, Nancy Pelosi is still not running away.

“Let me tell you something, that isn’t public sentiment,” she said over an emptied espresso cup in downtown Miami, three weeks before Tuesday’s election. “I have my own public sentiment, and I feel very confident about the following that I have in the country. And if the Republicans want to spend $100 million criticizing me, demonizing me, I must be pretty important.”

Pelosi, 78, is the highest-ranking woman in American politics and American political history. And as the only woman at the table for so long, she has become the proxy for all the complicated feelings around women in power.

The caricatures come easily. One ad — Republicans have run more than 61,000 featuring her in the past six weeks, more than either party has run about President Donald Trump — depicts a California congressman walking in a cheap version of Pelosi’s signature stilettos, more streetwalker than former speaker. Has anyone ever attempted to tar a candidate with Chuck Schumer’s reading glasses or Mitch McConnell’s wingtips?

But there is something different this year. With more women than ever running for the House — most of them Democrats — Pelosi does not just know her power, to use the slogan she repeats to female candidates, she is declaring it. She tells audiences she is a “dazzling fundraiser” (she has brought in half of every dollar raised by the Democratic Congressional Campaign Committee) and a “master legislator” (the one who shepherded and protected the health care legislation that so many Democrats are running on).

Even Republican polling shows that the ads against her aren’t moving many people; she’s more popular than Trump and the other big three leaders in Congress. That’s not saying much — none of them would win a contest — but voters care less about her than they do about immigration, health care, corruption, gun policy, and Trump.

She has spent months crisscrossing the country campaigning for this new generation, excited for what she calls a “watershed year” for women in the House; she came to Congress five years before the Year of the Woman in 1992, after raising her five children, and there were only 23 female House members. She moves from New York to Boston to Florida in a day with no evidence of weariness, raising money, rallying volunteers in districts the Democrats are hoping to flip, whispering to candidates, promoting the health care law — all, to paraphrase the old line about Ginger Rogers, in three-inch heels.

And the surging numbers of women turning out in politics this year are speaking up for her, defending her against what they see as Republican-stoked misogyny and ageism.

“How long can they kick Hillary Clinton around when she’s not part of the scene anymore?” said Mary Gay Scanlon, a Democratic nominee outside Philadelphia, for whom Pelosi campaigned last month. “They need a surrogate, and it’s Nancy Pelosi.”

So this is also what it’s like being Nancy Pelosi:

Christina Hartman, a former congressional candidate who was moderating a panel with Pelosi at the Philadelphia office of Emerge, which trains women to run for office, told the crowd how she built her “Nancy Pelosi wardrobe” as campaign armor, then introduces “our fighter, our champion of political candidates, our style icon and political fairy godmother, Nancy Pelosi.”

Mobbed by attendees afterward, Pelosi leaned in as Vern Mack, a local committeewoman, told about all the women like her in her neighborhood who are raising their grandchildren because their sons were killed by gun violence. “I am in awe of her,” Mack said after.

Pelosi tells female candidates they have to be ready, to know their issues cold and to have a plan: “I don’t want you to be intimidated by anything people will say, because they’re always trying to diminish whatever it is we have done,” she told the audience at Emerge.

A son-in-law (not the Republican, though she does have one) calls her the “Lady Gaga of American Politics,” sticking up for the oddballs and the outcasts. To the transgender woman who wants to run for office, and the Muslims who organized after being denied a permit to build a mosque and are now hosting her at a fundraiser, Pelosi repeats her favorite aphorisms: “Know your why, know your how” and “Don’t agonize, organize.”

She has been urging Democrats to put aside thoughts of a “wave” or a “tsunami” — it’s the drops of water that count. “Conor Lamb won by 627 votes,” she reminded volunteers.

Within her party, the criticism of Pelosi is that she hasn’t done enough to help the Democrats recognize and cultivate younger leaders and the emerging style of politics: the flood of small donors and the young, often outsider candidates and grass-roots groups that have flourished since 2016. With her at the head, the party can seem “off in a tower somewhere,” said Tahra Goraya, 45, a master’s student at Harvard who has worked at nonprofit groups for children and Muslim rights.

After watching Pelosi speak at the Kennedy School, she was more optimistic, though warily so. “I think she recognizes the diversity of the folks coming into the fold needs to be embraced,” she said. “How ready the party is, we’ll see.”

Given the criticism, it was surprising to see Pelosi’s obvious familiarity with the Parkland students, who have become emblems of the new generation, as she spent more than an hour talking to them in a South Florida school last month.

“We met once with Speaker Ryan and were asking what were some of his solutions,” Chris Grady, one of the students, said in an interview after. “At one point he just threw up his hands and said, ‘I don’t know.’ With Nancy Pelosi, she’s actively looking out and pushing for these measures that will save lives instead of throwing up her hands and saying, ‘Oh well, let more Americans get killed.'”

The other activists prevailed on Hogg to apologize to Pelosi in August, after his derogatory remarks to New York magazine. She responded by setting up a monthly call between her and young activists across the country.

“David was saying we need to rebrand the Democratic Party, and I think Nancy Pelosi has been doing that,” said Alfonso Calderon, another student. “She’s been going around the country on every issue — LGBTQ, gun violence, taxes, health care, money in politics. She brings those things up not just because she knows they’re important talking points, but because her constituents and people all over the country are telling her this is what matters.”

In an interview, Pelosi did not want to linger on the attacks against her. “The woman thing is a double-edged sword,” she said. “Yes, there’s misogyny out there. But you get a tremendous upside: the support of women.”

In her 15 years as leader, 68 new Democratic women have entered the House, and the total has risen to 65 from 42.

Her excitement about the flood of “fabulous women” running for office this year has given her more freedom on the trail. “I’m a shy person,” she said. “For me to be assertive that way, it’s not for me. It’s for the women. To say, don’t take it. Be confident in who you are, what you have to offer. And understand: if you are effective you’ll be opposed. But you’re in the arena. That’s what it is, and it’s not for the faint of heart.” She’s pragmatic about those who’ve run ads against her.

“If they’re coming in with millions to demonize me, what’s a candidate to do in her district?”

There are roughly two dozen votes against her bid for speakership, not enough to sink her; some of the Democratic candidates saying they won’t vote for her are in Republican districts where they’re unlikely to win.

“My time is big money,” she said. “I can be on the phone calling people instead of saying, ‘I wish that somebody who’s not even going to Congress wouldn’t say they’re not for me.'”

“Hey, we’re in politics,” she said. “What did people think they were going to, a tea party?” Pelosi does not intend to stick around forever. She would have resigned if Hillary Clinton had won in 2016; there would have finally been another woman at the table, and the Affordable Care Act protected. She calls herself “a bridge.”

“Bridge within the party?” asked Mark Gearan, her interviewer at the Kennedy School. “Bridge — how are you referencing the bridge?” His voice trailed off as she gave him the kind of look that is most withering when it comes from a mother.

A bridge to the next generation, she means; she loves legislation, she thinks she’s good at it. “One thing to do is to make sure people know how to do it,” she said. “You have to get experience, that’s why I want so many more young women to come.”

With days to go, Nancy Pelosi was not agonizing, she was organizing her grandson Paul’s 12th birthday party. She helped him and his brother, Thomas, make their Halloween costumes. For Thomas, a hamburger (his best friend was fries). For Paul, a skeleton outfit and a mask of George W. Bush: The Ghost of GOP Past.