Democrats Urge Release of Their Own Memo 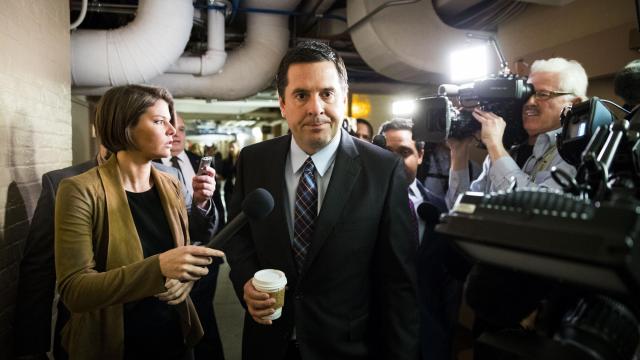 WASHINGTON — As Republicans on the House Intelligence Committee backed away Sunday from President Donald Trump’s claim that a newly released memo vindicates him in the Russia investigation, Democrats pressed for the release of their own classified rebuttal, with a vote expected Monday on whether to make it public.

The memo that the panel’s Republicans released Friday claims that federal law enforcement officials abused their powers to spy on a former Trump campaign official. In the days since its release, members of the two parties have clashed sharply over its import: While some Republicans say it shows evidence of bias in the Russia inquiry from the start, Democrats have denounced it as a misleading tactic to undermine the investigation and protect Trump.

Republicans on the committee voted against releasing the Democratic rebuttal memo last Monday at the same time they chose to initiate the release of their own 3-1/2-page document. But several of those Republicans, as well as the House speaker, Paul D. Ryan, have indicated that they now favor releasing the Democratic memo, as long as it has been scrubbed of sensitive national security information.

Democrats have said their 10-page memo corrects mischaracterizations by the Republicans and adds crucial context to actions by the FBI and the Justice Department in obtaining a secret Foreign Intelligence Surveillance Court order to wiretap the former Trump aide, Carter Page.

The Democratic document, if the Intelligence Committee votes to release it, would be subject to the same review by the president. An official said Sunday that the White House was open to releasing it pending an examination to protect intelligence sources and methods.

“Generally speaking, we’re open to considering any document the House Intel Committee submits to us for declassification along the lines that the Nunes memo was considered,” said a White House spokesman, Raj Shah, referring to Rep. Devin Nunes of California, who spearheaded the Republican memo as the Intelligence Committee chairman.

The Democratic memo is said to contend that the FBI was more forthcoming with the surveillance court than Republicans had claimed. Republicans allege that the bureau did not disclose to the court that information from a former British spy, Christopher Steele, that was used in the warrant application had been partly financed by the Democratic National Committee and lawyers for Hillary Clinton’s presidential campaign.

People familiar with the document have said it also rebuts Republican claims that Andrew G. McCabe, the deputy director of the FBI at the time, had told the Intelligence Committee late last year that the agency would not have sought a wiretap of Page without Steele’s dossier of information.

Rep. Jim Himes of Connecticut, a senior Democrat on the committee, said on Sunday that Americans needed to see the Democratic document.

“What we will learn is that it is not true that this FISA warrant was awarded solely on the basis of the Steele dossier,” Himes said on CNN’s “State of the Union.” “We will also learn that the FBI, because they are very careful people, didn’t mislead the judge, that the judge had some sense that this information came out of a political context.”

Sen. Chuck Schumer of New York, the top Senate Democrat, told Trump in a letter that any move to block the memo would “confirm the American people’s worst fears” that the release of the Republican document was intended solely to undermine the investigation by the special counsel, Robert S. Mueller III.

House Republicans had been promoting their secret memo for weeks, with some arguing that it would fundamentally reshape the public’s view of Mueller’s inquiry. Trump, who has routinely referred to the investigation as a “witch hunt,” characterized the memo as a damning indictment of the inquiry.

But even though the president said the memo had vindicated him, in reality it did nothing to clear him of either collusion with the Russians or obstruction of justice — the lines of inquiry being pursued by Mueller. The memo in fact undermined some Republicans’ efforts to cast doubt on the roots of the investigation by confirming that the inquiry was already underway before law enforcement officials presented the Steele information in obtaining the warrant to conduct surveillance on Page. On Sunday, several Republicans on the Intelligence Committee distanced themselves from Trump’s statements. Rep. Trey Gowdy, R-S.C., who advised the Republican committee staff members who drafted the memo, said that he saw no substantive connection.

“I actually don’t think it has any impact on the Russia probe,” he said on CBS’ “Face the Nation.” He added, “There is a Russia investigation without a dossier.”

Rep. Brad Wenstrup, R-Ohio, who also sits on the intelligence panel, echoed those remarks on CNN’s “State of the Union.”

“In my opinion, what we’re dealing with is a situation within our FISA court and how we process within our government agencies,” he said. “And I don’t think it really has anything to do with that,” he added, referring to the broader Russia inquiry.

The people familiar with the Democratic document say that it reveals that while the FBI did not name the Democratic National Committee and Clinton’s campaign as having funded the Steele research, the bureau disclosed to the court that the information it had received from him was politically motivated. That, the Democratic memo says, gave the judge in the case the information he needed to make a decision about its usefulness.

The memo is also said to argue that Republicans distorted the testimony by McCabe, the FBI official, and left out reams of other evidence included by the FBI to support the bureau’s suspicions that Page was acting as an agent of Russia. McCabe in fact presented the material as part of a constellation of compelling evidence that raised serious suspicions about Page, a former Moscow-based banker who had been on the FBI’s radar for years, according to those familiar with the memo.

Democrats have publicly called for the Republican-controlled committee to release a transcript of the interview with McCabe.