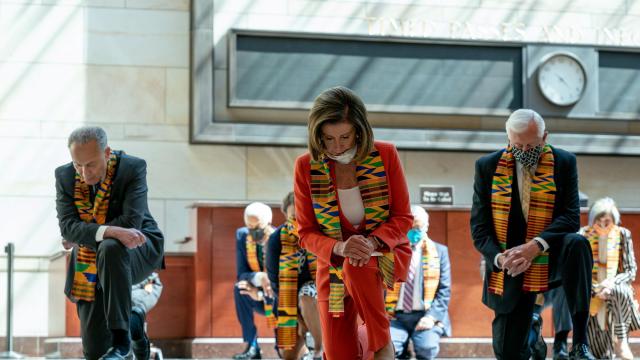 WASHINGTON — Democrats in Congress on Monday unveiled sweeping legislation aimed at combating excessive use of force and racial discrimination by police and making it easier to identify, track and prosecute misconduct, the most expansive federal intervention into law enforcement that lawmakers have proposed in recent memory.

Introduced as a direct response to the recent killings of unarmed black Americans as protests of police violence and racial discrimination continue across the country, the bill proposes significant changes to the rules that govern how police officers operate and how they can be held accountable for wrongdoing. It comes as tens of thousands of Americans have taken to the streets to call for a nationwide reckoning with systemic racial discrimination, particularly by law enforcement.

The legislation would curtail protections that shield police officers accused of misconduct from being prosecuted and impose a new set of restrictions on law enforcement officers to prevent them from using deadly force except as a last resort. It includes many measures that civil rights activists have been pushing for decades, which have met with strong opposition from police unions and law enforcement groups.

Its prospects are uncertain on Capitol Hill, where Republicans — despite expressing outrage at some recent episodes of police violence toward black Americans and endorsing calls for change — have yet to indicate what steps, if any, they are willing to embrace. And elements of the measure have already drawn resistance from President Donald Trump, who has called for a military crackdown on the protests and offered unqualified praise of law enforcement, including encouraging rough police tactics in the past.

“The Justice in Policing Act establishes a bold, transformative vision of policing in America,” said Rep. Karen Bass of California, the chairwoman of the Congressional Black Caucus. “Never again should the world be subjected to witnessing what we saw on the streets in Minneapolis, the slow murder of an individual by a uniformed police officer.” “The world,” she continued, “is witnessing the birth of a new movement in our country.”

She was joined by Rep. Jerrold Nadler of New York, the House Judiciary Committee chairman, and Sens. Cory Booker of New Jersey and Kamala Harris of California in introducing the measure. Immediately beforehand, they gathered with Democratic leaders to honor George Floyd, the black man whose death last month after a confrontation with Minneapolis police officers has fueled the protests. The lawmakers knelt for 8 minutes and 46 seconds — the exact amount of time that an officer knelt on Floyd’s neck as he lay pleading to be allowed to breathe.

Whether Democrats can seize the moment and push the changes into law remains unclear. The Democratic-led House, which plans to open hearings on the issue Wednesday with a hearing featuring Floyd’s brother, is expected to pass the legislation swiftly. Trump and Republican lawmakers who control the Senate have yet to weigh in on the proposals, but Kayleigh McEnany, the White House press secretary, shot down one of the provisions Monday afternoon.

“He is looking at a number of proposals, but there are some nonstarters in there,” McEnany told reporters. She singled out a measure to alter the legal doctrine known as qualified immunity, which shields police officers from being held legally liable for damages sought by citizens whose constitutional rights are found to have been violated.

Past attempts at a broad federal overhaul of police practices have failed to bring about lasting change. In 2014, responding to an outpouring of outrage after a white police officer killed Michael Brown, an unarmed 18-year-old black man in Ferguson, Missouri, Democratic lawmakers called for swift legislative action to address the issue of racial bias in policing. But with Republicans in charge of both chambers arguing the matter was one for state and local governments to take up, little was achieved.

Democrats insisted Monday that their efforts would not be halted again, arguing that the civic unrest that has erupted in small towns and big cities alike has created political momentum for changes.

The legislation now proposed by House and Senate Democrats would amend the federal criminal code to make it easier to prosecute police officers for misconduct. Prosecutors now must prove that an officer “willfully” violated an individual’s constitutional rights; the bill would lower that standard, to actions undertaken with “reckless disregard” for the individual’s rights.

It would also create a national registry to track police misconduct and require law enforcement agencies to report data on the use of force.

The legislation closely aligns with reforms proposed by former Vice President Joe Biden, the presumptive Democratic presidential nominee, who called on Congress last week to ban police chokeholds and pledged that his administration would create a national police oversight commission and a new standard for use of force. Both measures are included in Democrats’ legislation unveiled Monday, including one requiring law enforcement to use deadly force only as a last resort after employing a series of deescalation tactics.

Among other reforms, the legislation would also require all uniformed federal officers to wear body cameras and mandate that state and local agencies use federal funds to “ensure” their use. It would also condition some federal grants on the adoption of anti-discrimination training and practices.

The legislation would not defund or otherwise dismantle police departments, a call that many protesters and some of the most progressive Democrats in Congress have taken up in recent days, arguing that police brutality can end only if departments are taken apart and revamped. Rep. Ilhan Omar, whose district includes Minneapolis, marched Sunday at the front of a “Defund the Police” protest. Recirculating a video of a white police officer choking a black woman on Twitter, Omar asked, “How are we supposed to reform this?”

But that position has picked up scant support among other Democrats in Congress, even in the Progressive Caucus, whose members have coalesced around measures to increase law enforcement accountability.

That has not stopped Trump and some Republicans in Congress from falsely seeking to paint all Democrats as supporting the defunding movement and all proposals for change as extreme and dangerous.

The president spent much of Monday morning tweeting about “LAW & ORDER,” including in a post in which he said that “now the Radical Left Democrats want to Defund and Abandon our Police.”

Rep. Kevin McCarthy, R-Calif., the House minority leader, took to Twitter to thank police, adding, “Democrats want to defund you, but Republicans will never turn our backs on you.”

In a bid to quash that narrative, a spokesman for Biden on Monday put out a statement saying that he “does not believe that police should be defunded.”

“He hears and shares the deep grief and frustration of those calling out for change, and is driven to ensure that justice is done and that we put a stop to this terrible pain,” said the spokesman, Andrew Bates.

Pelosi also distanced herself from the defunding movement Monday.

“We want to work with our police departments,” she said at the news conference. “There are many who take pride in their work, and we want to be able to make sure that the focus is on them.”

Still, she suggested that some restructuring of the role of law enforcement was in order.

“There are many issues that we call upon our police departments to deal with,” she said, including mental health and school safety. “We could rebalance some of our funding to address those issues more directly.” Many of the proposals outlined by congressional Democrats are likely to face stiff opposition from police unions and national law enforcement groups who enjoy significant political power, both in local governments and in Congress. Some are also likely to face charges of federal overreach, because most police departments are under state and local control.

Still, the legislation amounts to the most comprehensive reimagining of policing by Congress in years. The proposal would limit the transfer of military weaponry to state and local departments and ban “no knock” warrants in federal drug cases that allow police officers to enter residences without warning.

Democratic leaders also hope the legislation can serve as a final push to designate lynching as a federal crime. Efforts to pass a stand-alone bill to do so have been blocked by Sen. Rand Paul, R-Ky., who has sought to narrow the bill’s definition of lynching, arguing that the measure’s language is overly broad and could lead to excessive sentencing.