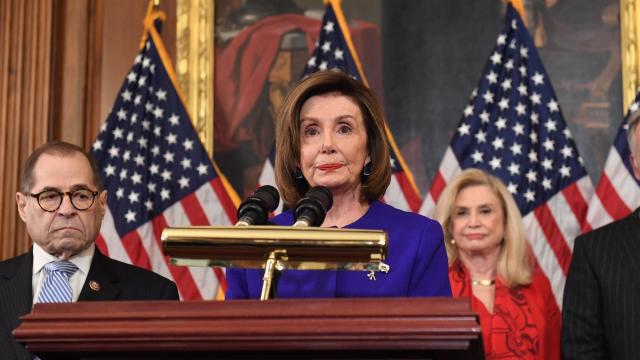 CNN — Democratic leaders announced Tuesday they will bring two articles of impeachment against President Donald Trump, charging him with abuse of power and obstruction of Congress to set in motion the third impeachment of a US president in history.

The announcement marks the culmination of an intense, fast-moving investigation into the President's dealings with Ukraine and represents a historic choice for lawmakers with less than a year before the next election.

The six House Democratic chairs who have led the investigations against the President this year formally unveiled the impeachment articles on Tuesday morning with House Speaker Nancy Pelosi.

"Today, in service to our duty to the Constitution and to our country, the House Committee on the Judiciary is introducing two articles of impeachment, charging the President of the United States Donald J. Trump with committing high crimes and misdemeanors," House Judiciary Committee Chairman Jerry Nadler said.

Democrats charge that Trump abused his office by pressuring Ukraine to investigate his political rivals ahead of the 2020 election while withholding a White House meeting and $400 million in US security aid from Kiev. And they say that Trump then obstructed the investigation into his misconduct with a blanket blockade of subpoenas and refusing to allow key senior officials to testify before Congress.

Tuesday's announcement sets the stage for a dramatic impeachment vote on the House floor next week, after the House Judiciary Committee debates and approves the articles beginning on Thursday.

House Intelligence Chairman Adam Schiff said the evidence against Trump was "overwhelming and uncontested," and argued Democrats cannot wait for the judicial branch to rule on the witnesses and documents the Trump administration is blocking from Congress.

"The argument why don't you just wait amounts to this: why don't you just let him cheat in one more election?" said Schiff, a Democrat from California. "Despite everything we have uncovered, the President's misconduct continues to this day, unapologetically and right now."

The White House slammed the introduction of the impeachment articles and said Trump would "address these false charges in the Senate" after the President did not participate in the House proceedings.

"The announcement of two baseless articles of impeachment does not hurt the President, it hurts the American people, who expect their elected officials to work on their behalf to strengthen our nation," White House press secretary Stephanie Grisham said in a statement. "The President will address these false charges in the Senate and expects to be fully exonerated, because he did nothing wrong."

This is the fourth time a US president is staring down the serious prospect of impeachment. The House voted to impeach Presidents Andrew Johnson and Bill Clinton, who were both acquitted by the Senate, while President Richard Nixon resigned before impeachment articles went to the House floor.

The announcement of impeachment articles from Pelosi came just minutes before the speaker then announced a deal Tuesday to advance President Donald Trump's renegotiated North American Free Trade Agreement — handing the President a victory at the same time Democrats are moving to impeach him.

The introduction of articles of impeachment comes after a two-month investigation into Ukraine that was sparked by an anonymous whistleblower complaint alleging Trump solicited election help from Ukraine on a July 25 phone call with Ukrainian President Volodymyr Zelensky. The 17 witnesses who testified during the House impeachment inquiry described a broader effort in Ukraine in which the President directed his personal attorney Rudy Giuliani to push Ukraine to investigate former Vice President Joe Biden and the 2016 election.

Following the investigation led by the House Intelligence Committee, which included public hearings with 12 witnesses, the House Judiciary Committee held two hearings laying out the case for impeachment and the evidence against the President.

The impeachment vote is likely to split largely along party lines, with a handful of potential Democratic defections. No Republicans appear likely to vote to impeach the President after an investigation congressional Republicans denounced as unfair and biased against the President.

Democrats had debated adding a third article of impeachment on obstruction of justice, which would have captured the allegations against Trump that were detailed in former special counsel Robert Mueller's investigation.

Pelosi and her top lieutenants ultimately decided to keep the articles focused narrowly on Ukraine, out of concern for moderates who only backed an impeachment inquiry once the Ukraine scandal spilled into public view.

But the episodes detailed in the Mueller report are expected to be incorporated into the charges that Democrats are laying out on Tuesday. In the Judiciary Committee, Democrats expressed Trump's actions in Ukraine as part of a broader pattern of misconduct that began during the 2016 election and still continues today.

House Foreign Affairs Chairman Engel told reporters that adding an obstruction of justice charge to the impeachment articles would be a "mixed bag of tricks," and that it didn't have broad consensus in the caucus — meaning it could be tough to get the votes to pass.

Still, Judiciary Committee Democrats said the episodes detailed in the Mueller report are expected to be incorporated to show how Trump's actions in Ukraine are part of a broader pattern of misconduct that began during the 2016 election and still continues today. Judiciary members said that the abuse of power charge was so all-encompassing that it covered all of Trump's behavior.

Rep. Pramila Jayapal of Washington said that he House wants to present "the strongest possible case to the Senate," which is why they chose the two articles.

"The pattern of conduct of asking a foreign government to cheat certainly will be reflected, and his pattern of obstruction also will be part of the case that we make," said Rep. Eric Swalwell, a California Democrat on both the Judiciary and Intelligence Committees. "This is just what he does when he gets caught."