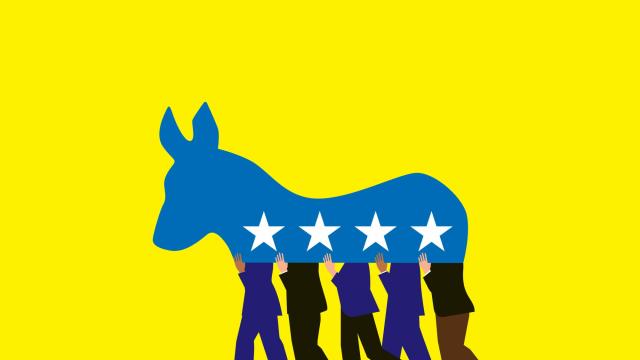 Dozens of prominent Democrats are at least flirting with running in 2020, and while it’s easy to look at them and play Goldilocks — too cold, too hot, too bald, too blond, too Wall Street, too wordy — it’s just as easy to believe. The perfect person? The party certainly lacks that. But potentially effective candidates? It’s lousy with them, though we chromosomally dyspeptic pundits prefer to shake our heads and sigh.

Republicans crowed about their supposed bounty in 2016 even as Donald Trump laid waste to it. Democrats bemoan their slim pickings in 2020 even though the field is positively obese. There are elders in their 70s and whippersnappers below 50; governors who can present themselves as Washington outsiders and senators who can tout their inside game; show horses and workhorses; progressives who didn’t just conveniently re-christen themselves that way and moderates who’d probably be potent in the general election if they could just survive the primaries. There are Westerners and Easterners and, in happy contrast to cycles past, more than a few women and people of color.

To worry that there’s no obvious winner is to ignore history. Presidents aren’t obvious until they’re sitting at the Resolute Desk (and sometimes not even then). Consider the last three.

Back in 2000, George W. Bush didn’t have gobs of governance under his cowboy belt; he wasn’t any dynamo on the stump; and his chief primary opponents included Orrin Hatch, Steve Forbes, Gary Bauer and Alan Keyes. If that’s a bench, give me a toadstool.

In 2008, Barack Obama had a compelling biography and undeniable magnetism, but a slender political résumé. Still, he soared past Hillary Clinton, Joe Biden, Chris Dodd and John Edwards, proving that a party’s savior isn’t necessarily part of a teeming, gleaming, preapproved bench. Sometimes he’s just an unexpected someone whose story and style catch fire.

As for the 2016 race, well, this far beforehand, Jeb! was still making Republicans’ hearts go pitter-patter. He had not yet rolled out his exclamation point only to crumple like a comma. Nobody saw Trump coming, and had somebody told Republicans that he was their destiny, they would have scoffed and guffawed and pointed out that he couldn’t be, because he wasn’t on their bench. He was preening crudely on some distant, irrelevant throne.

I know, I know: The focus now, especially after Conor Lamb’s unlikely triumph in Pennsylvania’s special election last week, belongs on the midterms. But if you believe that 2018 and not 2020 is foremost on the minds of Sens. Elizabeth Warren, Cory Booker and Kamala Harris, you’ve missed the arias that they’ve been performing at committee hearings. (They must have to rest their voices in between.)

You’ve also failed to notice that Mayor Mitch Landrieu of New Orleans has a memoir due out Tuesday (“In the Shadow of Statues: A White Southerner Confronts History”) and that there are books scheduled for release this year or next by Sen. Kirsten Gillibrand (“Bold and Brave: Ten Heroes Who Won Women the Right to Vote”) and Rep. Seth Moulton (“Called to Serve: Learning to Lead in War and Peace”). By sheer coincidence, all of these authors have been mentioned as possible presidential candidates or running mates.

All have virtues as striking as their shortcomings, if you’re not being a spoilsport. What was that? You say that Warren, Booker, Harris, Landrieu, Gillibrand and Moulton haven’t run for president before and received that crucial practice? Neither had Trump, Bush or Obama when they prevailed. Neither had Bill Clinton before Bush, though you could argue that he was running from kindergarten on.

And if you’re adamant about such experience, Sen. Bernie Sanders and former Vice President Joe Biden have it. They’re arguably a tiny bench by themselves, a septuagenarian sofa.

My goal here isn’t to list and place odds on the 30-plus Democratic politicians and nonpoliticians who have given more than a smidgen of consideration to 2020 and aren’t completely delusional to have done so. There will be ample opportunity for that down the road.

I’m only arguing that optimism about 2020 makes more sense than pessimism. It’s just far less fashionable. What’s more, negativity is better directed at the party’s policies than at its personnel. I’m still waiting on a convincing economic plan, a distillable governing philosophy and a slogan less like a used-car salesman’s come-on than “A Better Deal,” which was the party’s most recent stab at pith.

But whatever the vulnerabilities and limitations of the five senators I mentioned, most of them — plus others, including Amy Klobuchar and Sherrod Brown — could go the distance under the right circumstances. They fill a bench right there.

You need a second row for intriguing Democratic governors past and present, such as Deval Patrick, Andrew Cuomo and John Hickenlooper, whose surname crowds a lapel button but whose bona fides are desirable. He’s finishing a second term as the governor of a booming and deeply purple state (Colorado) and was an entrepreneur who made a small fortune in brew pubs. His book (“The Opposite of Woe: My Life in Beer and Politics”) came out in 2016, when he was on Hillary Clinton’s vice-presidential shortlist.

There’s a brainy cluster of Democrats under 50, and that’s reflected in an interesting bit of trivia. Three of them — Booker, Gov. Gina Raimondo of Rhode Island and Mayor Eric Garcetti of Los Angeles — were all Rhodes scholars together in the early 1990s, along with former Gov. Bobby Jindal of Louisiana, a Republican. That credential didn’t carry Jindal to his desired destination of 1600 Pennsylvania Ave. Will one of the others have more luck with it?

Naysayers note that Garcetti, a rising Democratic star who is eyeing 2020, would be the first sitting mayor to become president. He has pointed out in response that Los Angeles is more populous than 23 states. I had a long lunch with him there last month. He’s a fantastic talker with knowledge and charm to burn.

When Hillary Clinton drew only a few serious challengers for the Democratic nomination last time around, some analysts blamed a barren bench. That was only partly true. Her prominence also scared away other contenders. But since then, many Democratic politicians have ripened and been emboldened by the weakness of Trump and the outrage of his presidency so far. And then there are the entertainers and businesspeople I haven’t even named. To fit them in I’d need more than bleachers. I’d need a stadium.