Democrats plot next phase in impeachment, including new wave of subpoenas 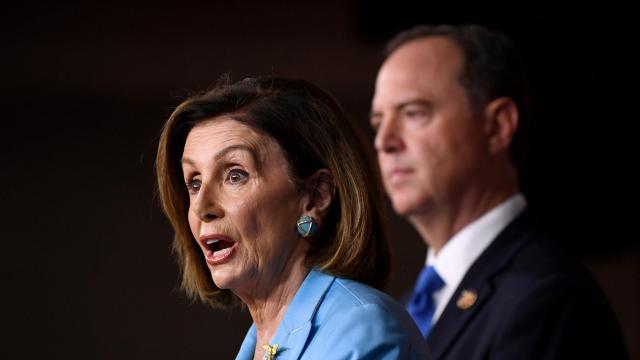 CNN — House Democrats are preparing a flurry of subpoenas in the face of the Trump administration's stonewalling of their impeachment investigation, amid a new debate within their caucus over holding a vote to formally authorize the inquiry in order to call the White House's bluff, according to Democratic sources.

In the face of the blistering White House letter refusing to cooperate with their probe, Democrats expect they are likely done with any voluntary interviews for most witnesses, according to multiple Democratic sources. And Democrats are now threatening subpoenas to associates of Rudy Giuliani and considering them for current State Department officials, including former US Ambassador to Ukraine Marie Yovanovitch. She is scheduled for an interview Friday, but there are new concerns she won't appear given that she is still a State Department employee and could face backlash internally if she were to appear voluntarily.

Discussions about Yovanovitch's testimony continued into Wednesday, and it remained unclear how it would it shake out by Friday. An official working on the impeachment inquiry said the committees, at the moment, expect Yovanovitch to appear Friday.

Negotiations are also intensifying over bringing in for an interview the whistleblower whose complaint has upended Trump's presidency, with new discussions about holding the interview in secret or off site and not disclosing that it happened until after the fact, according to multiple sources familiar with the situation.

At the same time, a small but influential group of Democrats privately and publicly tell CNN that it makes sense to hold an impeachment inquiry vote -- something House Republicans have demanded -- arguing it would derail the White House's declaration that the impeachment inquiry is "invalid" because there's been no House vote formally authorizing the probe.

A respected voice within the caucus told CNN Wednesday that it makes sense to hold a vote imminently.

"I think it's time for us to put a vote on the floor, a resolution for the inquiry structured in such a way that it can move forward with full power of the Congress behind it," said Rep. John Garamendi, a California Democrat. "They want to fight, OK, let's arm ourselves completely and totally with the full power of Congress. The votes, I am sure, are there for an impeachment inquiry, structured in such a way we have the full opportunity to get all the information, call in the witnesses, get the details, get the emails and all the rest."

But House Speaker Nancy Pelosi is still resisting calls for a vote -- with her allies arguing it is not required under House rules or the Constitution, while contending a vote in the full chamber would do little to change the Trump administration's posture toward the investigation.

The uptick in conversations underscores the crucial moment Democrats find themselves in during their impeachment push. There is growing pressure to vote on impeaching Trump as soon as Thanksgiving, but at the same time House Democratic leaders want to appear to be methodically collecting evidence over what they view as an abuse of power by the President in urging the Ukrainian government to investigate his potential political rival, Joe Biden, at the same time as US aid to the country had been stalled.

The White House's stonewalling presents a new challenge to their efforts to gather evidence but Democrats say defying subpoenas could also bolster their case that Trump is obstructing Congress, an impeachable offense. A number of Democrats believe that if they hold a vote to formally authorize an impeachment inquiry and the White House continues to defy their demands, it will make it even easier to convince the public that Trump should be impeached.

The prospect of voting on an impeachment inquiry will be a key topic of conversation next week when House Democrats return from Congress' two-week recess.

The caucus is expected to have a number of meetings throughout the week to get on the same page in confronting the White House's offensive against their investigation. House Democratic leaders will hold a conference call this Friday, where the impeachment debate is likely to come up. Moreover, Democrats plan to soon take up legislation, offered by Democratic Rep. Zoe Lofgren of California, that would in part require disclosure of offers of campaign assistance from foreign governments.

Yet the debate over next steps will continue. In particular, Garamendi's comments resonated with some Democratic members and aides, who said it's time to put the White House back on the defensive.

A senior Democratic aide involved in strategy discussions, who asked not to be identified, said there's been no official change in the House Democratic leadership's posture against holding a vote at this time, but added: "There is no reason we shouldn't call their bluff. The votes are there. Some moderates may not want to take a vote, but they are there."

Another Democratic member on a committee leading the impeachment charge said: "I think John is probably correct. POTUS is pushing us to the point, and we will see next week when folks get back on our measured approach."

A Democratic aide familiar with ongoing conversations told CNN that rank-and-file members pushing for it could be enough to convince leaders to hold a floor vote authorizing the probe.

The White House's letter to Pelosi called the impeachment investigation an illegitimate effort to "overturn the results of the 2016 election," and all but dared Democrats to formally vote on it, although it did not actually demand such a vote.

But Pelosi has not yet backed off her opposition to holding a formal vote, saying they already are conducting an impeachment probe that is valid under House rules. She has several reasons to resist a vote: It would eat up valuable time on the floor, it would be a politically difficult vote for some moderate Democrats and it would give Republicans a new avenue to criticize Democrats if they didn't give the minority subpoena power, which was granted in past presidential impeachment proceedings.

Pelosi is also cognizant of the different political pressures facing some of her members -- most notably the 31 Democrats and represent districts Trump carried in 2016, some of whom are the most vulnerable in their caucus. While many have publicly backed an impeachment inquiry, voting on a resolution authorizing the probe could put them in a difficult spot.

One congressional aide familiar with moderate Democrats' thinking said that a narrowly focused impeachment inquiry vote would be less of an issue, given how many moderates have already publicly supported an inquiry into the President's actions on Ukraine. But authorizing a broader scope for the impeachment investigation, the aide warned, could put members in a tougher position.

Asked for comment, Pelosi's office pointed to her recent remarks on the issue. "If we want to do it, we'll do it. If we don't, we don't," Pelosi told the Atlanta Journal-Constitution's editorial board last week. "But we're certainly not going to do it because of the President."

White House officials declined to say Tuesday how much Trump would be willing to provide if a successful vote were in fact held.

The White House's stance that it will not comply with any Democratic requests in the impeachment inquiry complicates Democrats' efforts to quickly obtain the investigative materials they're seeking surrounding Trump's push for Ukrainian President Volodymyr Zelensky to investigate his political opponent.

But if the Trump administration defies Democratic subpoenas and prevents witnesses from appearing, Democrats don't believe that will ultimately slow down their efforts. Unlike the House Judiciary Committee's investigation into obstruction of justice, where the panel went to court to try to obtain grand jury material and witness testimony, Democrats are unlikely to use the courts to try to enforce their newest subpoenas, as that process can drag out for months. That's because Democrats think as though they have the material they need already: the whistleblower complaint, the transcript of the phone call between Trump and Zelensky and text messages showing there was a connection between Zelensky opening an investigation and Ukraine's desire for a one-on-one meeting.

"You know what you need to know from the documents that we already have," said Rep. Gerry Connolly, a Virginia Democrat. "It is why I think the stonewalling is counterproductive and ultimately futile. There are going to be more people coming forward irrespective of White House stonewalling. All it does is persuade the public ... (the President) is resisting for a reason."

The White House stonewalling of the investigation could become wrapped up in the articles of impeachment that are drafted as obstruction of Congress.

"The White House should be warned that continued efforts to hide the truth of the President's abuse of power from the American people will be regarded as further evidence of obstruction," Pelosi said Tuesday in a statement responding to the White House letter.

The three committees now leading the impeachment probe -- Intelligence, Foreign Affairs and Oversight -- have already issued subpoenas to the White House, State Department, Office of Management and Budget and Pentagon as part of the investigation. They've also subpoenaed Giuliani and US Ambassador to the European Union Gordon Sondland, who was directed by the State Department not to attend a scheduled deposition on Tuesday.

More subpoenas are likely on the way soon. In addition to Yovanovitch, Democrats have requested documents from and interviews with Giuliani associates Lev Parnas, Igor Fruman and Semyon "Sam" Kislin. Democrats have warned subpoenas could be issued soon if the three do not comply voluntarily.

Democrats have also sought testimony from two additional State Department officials in connection with Ukraine and the July phone call, and they have requested documents from Vice President Mike Pence as part of the inquiry.

While Democrats aren't counting on cooperation from the Trump administration, a key witness they want to hear from as they gather evidence is the whistleblower, who set the impeachment investigation in motion by filing a complaint with allegations that Trump sought Ukraine's help investigating his political opponent and the White House tried to cover it up.

The timing of that meeting remains unclear, but sources told CNN that there are discussions about interviewing the whistleblower in secret with certain members of the House Intelligence Committee in an effort to protect the whistleblower's anonymity. Various options are being considered, including bringing the witness into a secure facility in the Capitol through passages that are off limits to the press. Holding the meeting off-site is also being discussed.

Regardless of how it happens, that testimony is likely to be a key step before Democrats proceed with drafting articles of impeachment.