Why Kamala Harris is the new Democratic frontrunner 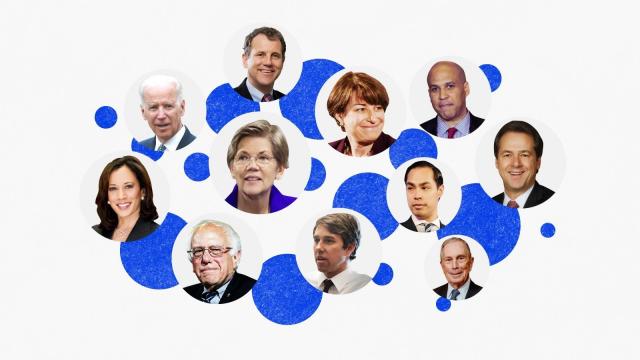 By Analysis by Chris Cillizza and Harry Enten, CNN

(CNN) — If there's one lesson Democrats should learn from the 2018 election, it's this: Their base wants to make history.

Everywhere you looked on the map last Tuesday night, Democratic voters were backing women -- and oftentimes women of color.

Which brings us to the 2020 Democratic presidential race. And specifically to California Sen. Kamala Harris.

Starting to get a sense for where we're headed here? We've always ranked Harris highly in these rankings -- due to the importance of California within the broader Democratic Party and the number of major donors in the state who would gladly help fund Harris' national ambitions.

But the 2018 election convinced us that Harris seems to be exactly what Democratic voters are telling the party and its politicians they want representing them going forward. A young-ish -- she's 54 -- non-white woman, Harris looks like the Democratic Party base these days. And if 2020 is anything like 2018, that's a very good place for her to be.

Mixed emotions: Kirsten Gillibrand (unranked): We don't know quite what to make of the junior senator from New York. Just a few weeks ago she basically said she wasn't going to run for president. We're usually suspect of declarations of this variety. (Remember, Barack Obama also wasn't going to run.) Gillibrand, though, seemed serious. Joke was on us. Now, Gillibrand says she's considering a run. We'll add her back to the list next month if she doesn't change her mind again. Gillibrand would be a strong contender, as a liberal woman from a state with a lot of money to offer a candidate running for high office.

Michael Bloomberg (honorable mention): As he always seems to do, the former New York City Mayor spent heavily from his own pocket to fund causes he believes in over the final weeks of the 2018 campaign. That he chose to run a series of national ads to do so shouldn't be lost on anyone. Bloomberg sees himself as a national figure and has always been desirous of a national platform. That desire, coupled with his party switch (he's a Democrat again) and his massive personal wealth, all suggest that Bloomberg is dead serious about running. The question is whether he -- a white guy from NYC -- is what the party is pining for.

10. Beto O'Rourke: One of us (maybe even the one writing this blurb) has historically been very skeptical of the now-failed Senate candidate. Sometimes, though, out of the ashes of failure rises success. O'Rourke came the closest for a Texas Democrat to winning a Senate race in a generation. He only lost to Ted Cruz by less than 3 points. O'Rourke did so as an unabashed liberal who inspired millions of Democrats across the country. Importantly, he proved be a tireless worker, which could serve him well on the presidential campaign trail. Still, O'Rourke lost in 2018, was just a three-term member of the House and is man running in a party becoming dominated by women. We're more than just a little skeptical.

9. Sherrod Brown: On paper, Brown should have been among the most vulnerable Democratic senators in 2018. He represents a state that President Donald Trump won by 9 points in 2016, and Republicans recruited a credible challenger -- Rep. Jim Renacci -- into the race against him. It didn't work out that way, as Brown cruised to a win even as some of his fellow Democrats in states Trump carried were losing on Tuesday night. Brown's victory speech openly called out his race as a blueprint for 2020. If you're looking for a dark horse, look no further than Brown, who has the record and the voice to sell liberal populism.

8. Steve Bullock: Some politicians are coy about running. The governor of Montana is the opposite of that. He's visited Iowa multiple times and New Hampshire as well. But showing signs of running isn't enough to get you on this list. One thing we like about Bullock is he has a lane that doesn't seem overly crowded ... yet. He's the outsider western governor in a party that is becoming more dominated by urbanites. That also means that his natural base within the party is very small. One other problem for Bullock is that most people have no clue who he is. In a crowded field, he may get buried before he ever has a chance to shine.

7. Julian Castro: Like Bullock, Castro, the former mayor of San Antonio and head of the department of Housing and Urban Development under then President Obama, is casting aside coyness. "I'm likely to do it," Castro told Rolling Stone recently. "I have a strong vision for the country." Given the rising influence of Hispanic voters within the Democratic coalition and Castro's proven star power -- his keynote speech at the 2012 Democratic National Convention was a tour de force of political oratory -- he's someone to keep an eye on.

6. Bernie Sanders: The case for Sanders remains as obvious as it ever was. He came in second in the 2016 presidential primary, maintains a high favorable rating with Democrats and he's quite progressive in a party moving to the left. Yet, it seems like his moment may have passed. Sanders placed a distant second in CNN's October poll on the Democratic primary, despite high name recognition. There's no sign that he has solved his problem of attracting black voters. Additionally, Sanders might be a victim of his own success. There will likely be other Democrats running this time around who are outsiders (such as Bullock) or are very liberal (such as Harris).

5. Cory Booker: Here's how you know the New Jersey senator is a very likely presidential candidate. On a trip through Iowa (DING) last month to stump for candidates up and down the Hawkeye State ballot (DING DING), he said this: "This might be the Midwest, I grew up in the Northeast, but folk are folk." (DING DING DING). Folk are folk! Booker has been somewhat outshined as the rising star within the changing Democratic Party by Harris, but he is a gifted orator and someone who seems to want it badly. Both of which matter in the grind of a presidential primary.

4. Amy Klobuchar: A lot of people will disagree with putting the Minnesota senator this high on the list, but hear us out. Democrats are desperate to win back the Midwest. If they are, then doesn't it make sense to nominate someone who just won reelection to the Senate from a key Midwestern state by 24 points. It was by far the biggest win for any Democratic Midwestern senator. We're reminded of another Midwestern senator who won his last election before running for president by a wide margin. What does Klobuchar offer the base? She gives them a calm but prosecutorial demeanor that she could use to fight Trump. That served her well during the Brett Kavanaugh hearings. Not being a fire-breathing liberal could hurt her in the primary, however.

3. Joe Biden: Take a poll today in any early voting state like Iowa or New Hampshire or South Carolina and the former vice president will be on top. Take a national poll of the Democratic field and Diamond Joe will be No. 1, too. And he sure looks like a candidate despite saying he won't make up his mind until early 2019. In the final days of the 2018 campaign, Biden, hoarse from shouting, held 12 rallies for Democratic candidates -- uttering classic Bidenisms like "It's time to get up. Remember who in the hell we are. This is America." So why isn't Biden at the top of our rankings? Because he's in his mid-70s, is a white male and has spent his entire adult life in politics. It's not clear to us that profile sells in this coming Democratic primary.

2. Elizabeth Warren: The senior senator from Massachusetts continues to remain near the top of our list for obvious reasons. She's a strong progressive voice in a party moving to the left, and she's a woman in a party that was nominating women at a record pace in 2018. Yet in her first big test of her 2020 potential candidacy, she came out behind. She was hoping to prove to detractors that she had Native-American ancestry, but her low percentage of Native-American DNA was mocked. Trump dismissed it. The test was also an unwelcome distraction during the closing weeks of the 2018 campaign. Warren will no doubt have the chance to recover. It was a weak start, however.

1. Kamala Harris: See above. Harris looks like the right fit for the 2020 Democratic presidential primary voter. She'll be well-funded. She's demonstrated her chops in high-profile tests -- flashing her prosecutorial experience (she's the former California attorney general) during the confirmation hearings for Brett Kavanaugh. Harris has been seen as a 2020 candidate since the day she announced she was running for the Senate. It now not only looks like she will make those expectations come true, but that she will start the race in a very strong position.