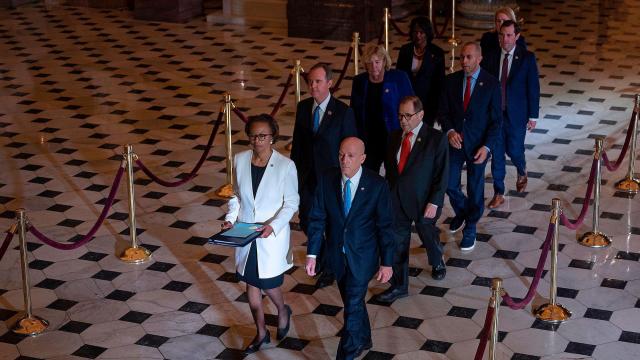 CNN — The House impeachment managers charged Tuesday that former President Donald Trump is "singularly responsible" for inciting the insurrection at the US Capitol last month, while Trump's legal team argued his speech was protected by the First Amendment and a Senate conviction would be unconstitutional.

The dueling pretrial legal briefs from the House managers and Trump's lawyers detailed the major points that will be argued at next week's trial, in the first real glimpse at how Trump's new legal team plans to defend him after the House voted to impeach him last month.

In a 14-page response to the House's impeachment effort on Tuesday, Trump's lawyers, Bruce Castor and David Schoen, argued that the Senate cannot vote to impeach Trump when he no longer holds office as well as that Trump's speech about the election and before the January 6 riots did not cause the riots and was protected by the First Amendment.

"The constitutional provision requires that a person actually hold office to be impeached. Since the 45th President is no longer 'President,' the clause 'shall be removed from Office on Impeachment for ...' is impossible for the Senate to accomplish," Trump's team wrote.

The House impeachment managers, in their brief filed Tuesday, pushed back directly on that point, which Senate Republicans have coalesced around as a reason to acquit Trump, arguing there is ample history and precedent to hold a trial and convict Trump, who was impeached by the House while still in office.

"There is no 'January Exception' to impeachment or any other provision of the Constitution," the managers wrote. "A president must answer comprehensively for his conduct in office from his first day in office through his last."

House Democrats noted that Trump was impeached while he still was president, pushing back on Senate Republican arguments that Congress cannot impeach a former official. Still, they argued there's a precedent for impeaching former officials, too, as there have been a handful of such cases in US history.

The House managers laid out their case against Trump in their 80-page brief filed Tuesday morning, in which they accused him of stirring up violence against Congress in an attempt to upend the peaceful transfer of power. They argued that the Senate should convict Trump and bar him from holding future office after he "threatened the constitutional system that protects the fundamental freedoms we cherish."

"President Trump's responsibility for the events of January 6 is unmistakable," the House impeachment team wrote. "President Trump's effort to extend his grip on power by fomenting violence against Congress was a profound violation of the oath he swore. If provoking an insurrectionary riot against a Joint Session of Congress after losing an election is not an impeachable offense, it is hard to imagine what would be."

Both the House impeachment managers and Trump's legal team are expected to submit additional briefs ahead of the start of the trial on February 9. The legal briefings will provide the backdrop for a case in which the House impeachment managers face a skeptical Senate Republican conference. Last week, 45 of the 50 GOP senators voted to support dismissing the trial on constitutional grounds, a sign that the 67 votes required for conviction are unlikely to materialize.

Trump's legal filing briefly touched on the former President's baseless and false claims that the election was stolen from him, disputing that his claims were false and arguing they were protected speech nevertheless.

"After the November election, the 45th President exercised his First Amendment right under the Constitution to express his belief that the election results were suspect, since with very few exceptions, under the convenient guise of Covid-19 pandemic 'safeguards' states election laws and procedures were changed by local politicians or judges without the necessary approvals from state legislatures," Trump's lawyers wrote. "Insufficient evidence exists upon which a reasonable jurist could conclude that the 45th President's statements were accurate or not, and he therefore denies they were false."

There was no evidence of widespread voter fraud, and Trump embraced conspiracy theories to falsely claim the election was stolen from him. The Justice Department confirmed it did not uncover evidence of widespread voter fraud. Trump's filing Tuesday revives claims his campaign made about the voting process that were repeatedly thrown out of the courts, which is what led Trump to focus his efforts on the January 6 congressional certification of the election, which was then disrupted by the insurrectionists in the deadly riot.

Trump's team denied the charge that his rhetoric in a speech on January 6 had incited the mob that attacked the Capitol. "It is denied that President Trump incited the crowd to engage in destructive behavior," his team wrote. "It is denied that the phrase 'if you don't fight like hell you're not going to have a country anymore' had anything to do with the action at the Capitol as it was clearly about the need to fight for election security in general, as evidenced by the recording of the speech."

The brief was filed by Trump's two new lawyers, Castor and Schoen, who took over the former President's impeachment defense after five attorneys who had initially signed on left his team over the weekend. It's unclear how much Trump's new attorneys plan to wade into his false election fraud claims during the trial next week -- one Senate Republican leader warned Monday that it would be a "disservice" to his defense to do so.

The House's pretrial brief provided the impeachment managers' most detailed argument to date for why Trump's actions surrounding the January 6 attack on the Capitol warranted his second impeachment in a little over a year, making him the first president in US history to have been impeached twice.

The impeachment managers charged that Trump's actions in the months leading up to January 6 of baselessly claiming the election was stolen from him created the conditions for a violent mob to be aimed "like a loaded cannon down Pennsylvania Avenue" to attack the Capitol.

In a preview of what's likely to be argued during next week's trial, the Democrats' filing Tuesday underscored how the rioters themselves have cited Trump as the reason they attacked the Capitol.

House Democrats also charged that Trump failed to respond to the riot, including reports that he had been "delighted" as the riot was unfolding, and noting that his tweets had not attempted to tell the rioters to leave the Capitol. Democrats argued that the events of January 6 and the former President's involvement had longer-term ramifications that threatened the security of President Joe Biden's inauguration later that month and beyond. Roughly 25,000 National Guard troops were deployed and state capitols around the country had to enhance security.

The Democrats also highlighted the bipartisan condemnation of the President's conduct, citing Senate Minority Leader Mitch McConnell's comments that the mob had been "provoked by the President" and statements from the 10 Republican members, including No. 3 House Republican Liz Cheney of Wyoming, who voted for impeachment.

"Representative Liz Cheney put the point simply when she recognized that '[t]here has never been a greater betrayal by a President of the United States of his office and his oath to the Constitution,' " the impeachment managers wrote.

The Democrats' brief, which was filed two hours before Trump's, anticipated some of the arguments they were likely to face, such as the speed at which they had moved on impeachment, which the House voted on one week after the riots. The managers dismissed those concerns, arguing that "this case does not involve secretive conduct, or a hidden conspiracy, requiring months or years of investigation."

House Democrats pushed back on Trump's claims that his speech was protected by the First Amendment, noting the First Amendment does not apply to an impeachment proceeding, and even if it did, its free speech protections do not extend to inciting violence.

"The First Amendment protects private citizens from the government; it does not protect government officials from accountability for their own abuses in office," they wrote. "Speech is not protected where it is 'directed to inciting or producing imminent lawless action and is likely to incite or produce such action.'"

The House's impeachment brief also made the case for the Senate to bar Trump from holding future office. If the Senate convicts Trump, which requires a two-thirds majority, it can also hold a vote on preventing him from holding office again.

"Constitutional history, text, and structure, as well as prior Congressional practice, all confirm that the Senate has jurisdiction to try President Trump," the managers wrote. "So does common sense. While sworn to faithfully execute the laws — and to preserve, protect, and defend the Constitution — President Trump incited insurrection against the United States government. His conduct endangered the life of every single Member of Congress, jeopardized the peaceful transition of power and line of succession, and compromised our national security."

This story and headline have been updated with additional developments Tuesday.