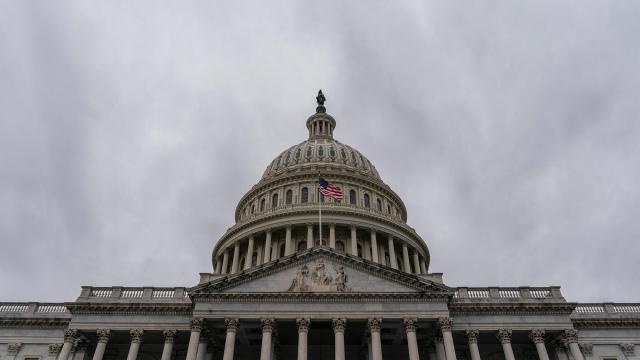 CNN — Senate Democrats are refusing to buckle to demands from Senate Republicans that they agree not to weaken filibusters against legislation, something many progressives are anxious to do in order to push through the Biden administration's agenda as Democrats control the White House and both chambers of Congress for the first time in years.

"I think we ought to end the filibuster, unquestionably. It is an obstacle to conquering the pandemic and reviving the economy, getting stuff done," said Sen. Richard Blumenthal, a Democrat of Connecticut.

The tense standoff over the issue is stalling a power-sharing agreement between the parties in the 50-50 Senate, where Vice President Kamala Harris has a tie-breaking vote. Republican Leader Mitch McConnell, now in the minority, is insisting language assuring the protection of minority rights -- through the requirement that 60 votes are needed to overcome filibusters of bills -- be added to a must-pass organizing resolution.

"Mitch McConnell was fine with getting rid of the filibuster to a United States Supreme Court nominee for a lifetime appointment, but he's not okay getting rid of the filibuster for unemployment relief for families that are out of work because of COVID-19," said Democratic Sen. Elizabeth Warren of Massachusetts. "I've just had enough of Mitch McConnell."

Even though Harris can break ties in Democrats' favor, the party can't take full control of the Senate until reaching an agreement with Republicans on an organizing resolution. They're operating on the organizing resolution from the last Congress, when the GOP was in the majority. Because of that, for instance, confirmation hearings for President Joe Biden's Cabinet picks this week are being chaired by Republicans.

Wrapped up in the larger negotiations over the power-sharing agreement are talks over the timing of the impeachment trial. Majority Leader Chuck Schumer and Democrats haven't ruled out the idea of delaying the trial -- as McConnell has proposed -- as long as they try to get a deal to lock in votes on Cabinet nominees and finalize a deal on the power-sharing agreement.

Republicans are trying to leverage the urgency to pass an organizing resolution to press Democrats to agree not to gut the filibuster for legislation. But with Democrats staunchly refusing to do so, it's not clear how long it will take the sides to reach an agreement and it could drag out.

McConnell argues that preserving a supermajority vote to pass legislation is a unique and important characteristic of the Senate, which the Founders believed should be a body where compromise between the parties would be needed to balance the strict majority-driven rule of the House of Representatives.

The Kentucky Republican made that point in a 2019 op-ed in the New York Times: "Yes, the Senate's design makes it difficult for one party to enact sweeping legislation on its own. Yes, the filibuster makes policy less likely to seesaw wildly with every election. These are features, not bugs. Our country doesn't need a second House of Representatives with fewer members and longer terms. America needs the Senate to be the Senate."

McConnell also argues that Democrats used the filibuster countless times when they were in the minority to block legislation from Republicans and the Trump administration.

Schumer, who had said his caucus would have a serious discussion about it if they gained control of the Senate, has not stated if he wants to change the filibuster for legislation. But he doesn't want to rule out the possibility for fear Republicans might obstruct nearly everything the Democrats put on the floor.

Senate Democratic Whip Dick Durbin of Illinois said his party is "not going to give" in to McConnell's wishes: "If you did that then there would be just unbridled use of it. I mean, nothing holding him back."

Despite the consternation over the issue, it doesn't appear Democrats would have enough support in their caucus to change the rules because at least two centrists are resisting.

West Virginia Democratic Sen. Joe Manchin has said repeatedly he would not vote to gut the filibuster -- meaning it can't be pushed through the Senate without him -- but he said he doesn't disagree with Schumer refusing to put language into the organizing resolution protecting it.

"Chuck is right to do that, he's the leader. I'm in the minority of the caucus on this," Manchin said. "He has the right to use that to leverage in whatever he wants to do."

Sen. Angus King, an Independent from Maine, said he doesn't want to consider changing the filibuster unless he determines the Republicans are overusing it.

"Right now, we don't know whether it will be abused," he said. "If they're going to use it to obstruct absolutely everything, then I'm prepared to change my mind."

Supporters of the filibuster have reason to fear it could be further diminished. Both parties have jammed through on partisan votes -- known as the "nuclear option" -- changes to Senate rules to weaken filibusters against nominees. The Democrats did it first in 2013 to make it easier to confirm then-President Barack Obama's executive and judicial branch nominees. The Republicans extended it in 2017 to Supreme Court nominees clearing three of then-President Donald Trump's picks to the high court.

On the organizing resolution, Schumer argues the Senate should adopt the same power-sharing agreement as was passed in 2001, the last time the Senate was split 50-50. That agreement said nothing about gutting the filibuster, which was not used as frequently then as it is now.

"Our caucus believes that the fairest easiest and most bipartisan way to come to an organizing resolution is to enact the 2001 agreement that senators Lott and Daschle came to in a bipartisan way back then. We, our caucus, is strongly opposed to any extraneous provisions," he said referring to then-Republican Leader Trent Lott of Mississippi and then-Democratic Leader Tom Daschle of South Dakota.

But McConnell argued the 60-vote threshold for legislative filibusters is a standing rule of the Senate and therefore should be upheld in the organizing resolution.

"If the talk of unity and common ground is to have meaning, and certainly if the rules from 20 years ago are to be our guide, then I cannot imagine the Democratic leader would rather hold up the power-sharing agreement and simply reaffirm that his side won't be breaking this standing rule of the Senate," McConnell said on the floor.

Hawaii Democratic Sen. Brian Schatz summed up the frustration Democrats feel over the standoff this way: "McConnell is threatening to filibuster the Organizing Resolution which allows Democrats to assume the committee Chair positions. It's an absolutely unprecedented, wacky, counterproductive request. We won the Senate. We get the gavels."