Democrats Finally Control the Power in Albany. What Will They Do With It? 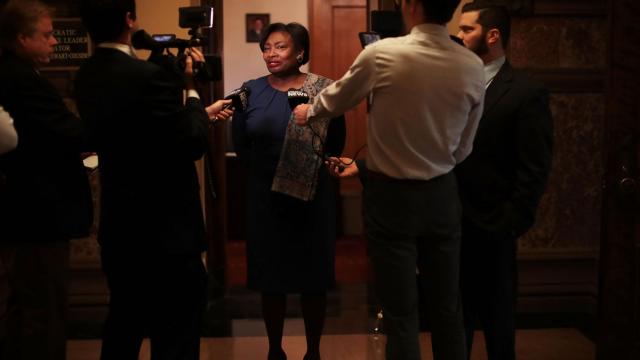 It’s been years in the making, if not decades: Gov. Andrew Cuomo and the Democratic Party seized complete control of the New York state government Tuesday, decisively evicting Republicans from running the state Senate, which they have controlled for all but three years since World War II.

Now Democrats have to figure out just what to do with that newfound power — and almost everyone has different ideas and priorities, some of which had already started to collide Wednesday, even as Cuomo and his Democratic colleagues celebrated major wins.

Democrats now hold 40 seats in the state Senate, as Republicans lost eight to the Democrats on Election Day. That count, however, includes Sen. Simcha Felder of Brooklyn, who has previously caucused with Republicans.

Cuomo, meanwhile, won with 59 percent of the vote — some 3.4 million people chose him for a third term — a marked improvement from his 2014 victory, and one that left the governor sounding deeply satisfied.

When asked Wednesday what he would like to see passed in the coming legislative session, the governor laid out a veritable Christmas list of progressive baubles, including codifying Roe v. Wade’s protections in state law; more gun control and ethics laws; the Dream Act, which would allow for financial aid for students brought into the country illegally; and the Child Victims Act, which would extend the statute of limitations for survivors of certain kinds of sexual abuse.

Perhaps most notably, Cuomo said he would close the so-called LLC loophole, which allows almost unlimited amounts of cash to flow to campaigns — including his own — through multiple limited liability companies.

Cuomo had worked closely with Republicans and a breakaway group of Democrats during his seven-plus years in office, much to the chagrin of more left-leaning members of his party, who blamed those relationships for bottling up the very legislation he now wants to pass.

And in describing his feelings Wednesday, the governor sounded relieved that he would stop being blamed.

“My great frustration has been the inability to pass progressive measures that would have made a significant positive difference for the state and, as governor, bearing the burden of the failure of their passage,” Cuomo said in an interview Wednesday. “The Democratic Senate will liberate me from that frustration.”

Still there will most be a push for even more: There is already chatter about legalizing recreational marijuana; investing more in the crumbling subways; addressing climate change; and installing an early voting system for the first time, all ideas that the governor has previously offered differing degrees of support for.

Andrea Stewart-Cousins, who is slated to become the first woman and first female African-American to lead the New York Senate, also struck a note of caution about the Democratic agenda. “You eat the elephant one issue at a time,” she said Tuesday, as votes began to roll in for her party.

There also will likely be, of course, intraparty differences. The Senate that Stewart-Cousins will lead is very likely to contain several factions, including New York City liberals and more moderate members from the city’s suburbs. Fifteen of her members will be new to Albany, and its vagaries, with many of that cohort never before having held public office — or, in some cases, even having an office. State Sen. Gustavo Rivera, D-Bronx, said that Democrats had failed to keep the trust of voters during their brief time in charge nearly a decade ago and know they must do better this time.

“Governing is a very complicated matter,” Rivera said. “It’s not just giving raises to your staff and getting nicer offices.”

For many, the scars from that brief 2009-10 period of Democratic rule are still fresh. It was a tumultuous time marked by ugly legislative high jinks, warring factions and the former Democratic leader eventually being sent to prison.

Cuomo won in 2010, in part, on a promise to restore sanity and stability to the statehouse. And he did so by occupying the political center between a liberal state Assembly and a Republican-controlled state Senate. For years, he has blamed any number of stalled liberal goals on recalcitrant Republicans. That catchall excuse dissolved Tuesday evening.

Alessandra Biaggi, who defeated Jeffrey Klein, the leader of the breakaway Democrats, said of Cuomo, “Now it’s up to us to actually hold him accountable and to make sure that the things that he says are not just campaign promises.”

Much of the to-do list that Cuomo discussed after the election involved social or legal changes. But the governor has generally been more leery of raising taxes and other measures that would negatively affect the business community; real estate interests pour millions of dollars into his campaigns and drive a large segment of the city’s and state’s economy. Mayor Bill de Blasio has repeatedly called for a new millionaire’s tax to fund various programs; Cuomo has steadfastly opposed it.

The last time Democrats controlled the full Legislature, they raised taxes only to see themselves lose the Senate within two years. “This scary narrative about tax-and-spend-Democrats will not pertain to us,” said Stewart-Cousins, D-Westchester. “It does not pertain to us.” One big issue sure to come up in 2019 is expanding rent control, as the current rules are set to expire.

State Sen. Brian P. Kavanagh, D-Manhattan, who was elected in 2017, predicted “a fundamentally different debate about the relationship between landlords and tenants” than in the past.

The governor has also signaled he wants to push a congestion-pricing plan to boost funding for the Metropolitan Transportation Authority, which runs the subway system.

“How are we going to fix the MTA? We have got to do this,” Biaggi said. “This is insane. Enough now. I don’t think anyone wants to hear any more excuses.”

Cuomo has previously feuded with state Sen. Michael Gianaris of Queens, who runs the political operation of Senate Democrats. Even some of the governor’s allies were perplexed by an October news release from the state party, which Cuomo controls, that contrasted his efforts with those of Gianaris.

Stewart-Cousins said, “I thought that was an unfortunate press release, frankly, and I made sure that the state party chair was aware of that.”

And on Wednesday, there were hints of friction there again as Gianaris said he had been kept in the dark about a possible deal to place a satellite headquarters of Amazon in Long Island City, which is the heart of his district. Cuomo has openly lobbied for Amazon to come to New York, joking he would even change his name to “Amazon Cuomo” to land the company.

Gianaris, however, has expressed deep concerns about infrastructure, overcrowding and the wisdom of using subsidies to lure “one of the richest companies in the world.”

“There’s all sorts of red flags,” he said. “And I don’t have any answers.”

Still, Gianaris, who helped orchestrate the Democrats’ big night Tuesday, also seemed eager to keep the peace. “This is a not a complaint that I wasn’t briefed properly,” he said.