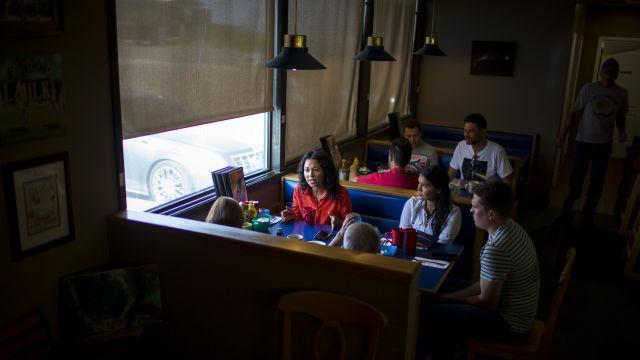 DALLAS — House Democrats, looking to wrest control of the chamber from Republicans in November, are discarding the lessons of successful midterms past and pressing only a bare-bones national agenda, leaving it to candidates to tailor their own messages to their districts.

It is a risky strategy, essentially putting off answering one of the most immediate questions facing the Democratic Party after its losses in 2016: What does it stand for?

The approach could also raise questions among voters about how Democrats would govern.

Democrats say they have answered that question with a recently adopted slogan, “For the People,” a skeletal, three-point platform and a longer version, called “A Better Deal.” But with anti-Washington sentiment simmering; a deep divide between the party’s moderates and its left flank; and the brand of the party’s longtime leader, Rep. Nancy Pelosi of California, toxic in large sections of the country, they have concluded that a unified campaign framework emanating from Capitol Hill would do more harm than good.

And as Tuesday night’s election results made clear, the primary season drawing to a close has made the search for a unifying message that much more difficult, elevating self-described democratic socialists like Alexandria Ocasio-Cortez in New York and Rashida Tlaib in Michigan to argue policy with a Trump-voting populist like Richard Ojeda in West Virginia and a centrist like Conor Lamb in Pennsylvania.

The Democratic split was especially evident Tuesday in Minnesota, where Ilhan Omar, a 36-year-old Somali refugee who was embraced by Ocasio-Cortez, defeated four other Democratic candidates to run for an open seat. Omar stands in stark contrast to another Minnesota Democrat, Rep. Collin Peterson, a veteran centrist who voted against the health care law.

So across the country, Democrats will rely on their energized base and a loose message centered on a core promise of lowering health care costs and building a case that Republicans are using the government for their own advancement, which candidates are adapting as they see fit. If they are going to have a “blue wave,” Democrats say, it is going to come in varied hues.

“We trust our candidates to know their districts and the challenges facing their communities better than anyone,” said Rep. Ben Ray Luján of New Mexico, the chairman of the House Democrats’ campaign arm.

Rep. Kathleen Rice, D-N.Y., summed up the strategy this way: “None of the individual candidates is being burdened with carrying the national mantle.”

Here in Dallas, in a district that stretches from some of the city’s wealthiest neighborhoods — including the home of former President George W. Bush — to its ethnically diverse northern suburbs, Democrats did not even field a candidate in 2016 against Rep. Pete Sessions, now in his 11th term. Then Hillary Clinton won the district by 1.9 percentage points in the 2016 presidential race and now the party has pinned its hopes on Colin Allred, a former professional football player turned lawyer and an Obama administration alumnus.

On a steamy night last week, several hundred fired up Democrats jammed into the back room of a Mexican restaurant to hear Allred, 35, make his pitch. He is spotlighting his biography — an African-American man who grew up with a struggling single mother who worked as a teacher and who had an absent father — and his promise to be a change agent, much like the man his biography so resembles: former President Barack Obama.

“We might have come here on different ships, but we’re all in the same boat now!” he roared, prompting the crowd at one point to break into chants of Obama’s signature tag line: “Yes we can!”

Across the state border in rural southern New Mexico, Xochitl (pronounced So-cheel) Torres Small, 33, a natural resources lawyer who owns guns and proudly declares that she once killed an oryx, is reminding voters of her work preserving the Organ Mountains-Desert Peaks National Monument, which President Donald Trump proposed shrinking.

“We know our dreams are at risk when people in Washington try to tell us that our public lands, our water, our way of life aren’t worth protecting,” she said during a recent stop at a pancake house in Alamogordo, New Mexico.

And in rain-lashed Maine, Jared Golden, 36, a tattooed former Marine, rolled up his sleeves and pitched himself as a working-class populist with an economic message of “protecting what people need us to protect: Medicare, Medicaid and Social Security.”

“These are the things that are truly under attack,” he said one day last week, drawing applause from 50 or so labor organizers gathered for an annual conference in the university town of Orono. “The unraveling of the New Deal is just going to continue unless we stand up to them and stop it.”

For at least the past 20 years, whenever a party has won control of the House, it has done so with some kind of unifying message or pitch. In 1994, Republicans ran and won on their “Contract With America,” a 10-point legislative plan. In 2006, Democrats flipped the House with a legislative platform they called “Six for ’06.”

Newt Gingrich, the former House speaker and architect of “Contract With America,” said the goal was to get insurance or real estate agents entering politics for the first time to memorize 10 winning issues that they could bring to drive-time radio — and “every single issue, the average driver is going to go, ‘Well, I agree with that.'”

Gingrich argued that Democrats have “no compelling message,” other than that “they hate Trump.”

In fact, many Democrats — including Allred, Torres Small and Golden, all running in districts currently held by Republicans — rarely mention the president by name.

They do not need to, Luján said: “He’s going to do all the talking about Donald Trump for us.”

Democrats in the House tasked with cobbling together a unifying agenda after the 2016 elections say they studied “Contract With America” and similar plans in detail. But in the end, they settled on a narrow “do no harm” strategy rather than a granular point-by-point agenda punctuated with a high-profile unveiling at the Capitol. Midterm elections are almost always referendums on the president, regardless of the opposing party’s message.

The Democratic platform, “For the People,” outlines a relatively anodyne agenda — lowering health care and prescription drug costs, increasing worker pay, cleaning up corruption — that Democrats say unites all of their candidates. (Their anti-corruption theme got a lift last week when Rep. Chris Collins, R-N.Y., was indicted on charges of insider trading.)

That pitch, which builds on “A Better Deal,” a more detailed economic plan, noticeably sidesteps more divisive issues — #AbolishICE, “Medicare for All,” abortion rights and impeachment — that captivate the liberal base. The rest is supposed to look organic, bubbling up from candidates and the people they are trying to win over — an approach that Democrats say is essential to courting Trump voters who view them as the party of coastal elites.

“The Democratic Party has a brand issue; we have been damaged, and we have to earn people’s trust again,” said Rep. Cheri Bustos, D-Ill., who helped develop the For the People” platform. Her advice to candidates, she said, is to run “like you’re running for mayor.” In Maine’s 2nd District, Golden has tailored an economic message that he said voters have not heard from Democrats there in a long time. Stretching from tourist-pocked coastline into Maine’s sparsely populated interior, the district was once a Democratic stronghold, dotted with coastal shipbuilders and union-heavy mill towns. In 2014, it slipped into the Republican hands of Bruce Poliquin, a moderate former financier, who has fashioned himself as a job creator for a region that badly needs it.

Golden, an assistant leader in the Maine House who once worked for Sen. Susan Collins, a Republican, is wagering that the district’s rightward shift actually has less to do with newfound loyalty to Republicans than Democrats’ neglect of kitchen-table issues. He is running not to the center, but hard to the left — at least on economic issues — advocating universal health care and prekindergarten, an expansion of veterans and Social Security benefits, and strengthening labor laws.

“We’ve got to get back to the really simple things in life: People want a good job with good wages and benefits,” Golden said in an interview. “We’ve gotta talk about those near constantly and make really clear you are going there to help the people you represent without getting caught up in these sort of national battles.”

In New Mexico’s hardscrabble 2nd District, which stretches from the oil fields of Hobbs, past the White Sands Missile Range, to the Gila National Forest, Torres Small will face Yvette Herrell, a state representative who is running as a Christian conservative and a close ally of the president’s.

Trump won the district, long represented by Steve Pearce, a retiring Republican, by 10 points, but Torres Small is counting on energizing Hispanic voters — the district is 53 percent Latino — and on playing into residents’ feelings that the needs of the rural Southwest have been given short shrift in Washington.

“I’m trying to make sure that New Mexico is listened to,” she said.

Here in Dallas, where Sessions has not had to run a competitive race since 2004, Allred is pinning his strategy on increased turnout and shifting demographics, including an influx of young professionals moving in from blue states. His top legislative priority is bipartisan — an infrastructure bill. His views on health care are centrist; he would allow people to buy into Medicare, a proposal embraced by Clinton, rather than having the government cover everyone.

But as much as policy, Allred is running on style, evoking Obama’s message of unity.

“The question isn’t can we do it?” he told the crowd, organized by a group called the Funky East Dallas Democrats, in response to their “Yes We Can” chant. “It’s, ‘What are you going to do to make sure that we can?'”

“Together,” he concluded, “we’re going to shock the world.”