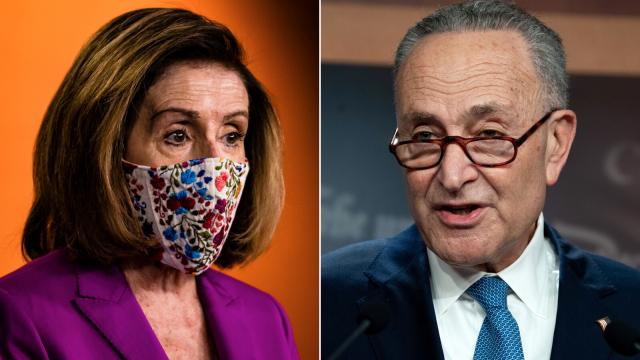 CNN — Congressional Democrats are torn over whether to try to punish Donald Trump by censure or move on completely from the former President after the Senate likely acquits him on a charge of inciting the January 6 Capitol riot, possibly as soon as this weekend.

The Democratic debate focuses on whether to try to punish Trump via another means -- such as the possibility of censure -- that could win more support from congressional Republicans. But some Democrats view that move as too weak and a distraction from pursuing an ambitious agenda pushed by President Joe Biden.

Moreover, some Democrats privately contend that such a vote could give Republicans who voted to acquit political cover by seeking to distance themselves from Trump's actions without taking a more punitive step of convicting him during the Senate impeachment trial.

Meanwhile, there are other Democrats who say a censure resolution could be structured in a way to effectively bar Trump from running from office again under the 14th Amendment of the Constitution -- an idea recently floated by Sens. Tim Kaine, a Democrat from Virginia, and Susan Collins, Republican from Maine. Some Democrats also believe that putting a censure resolution on the floor would actually put GOP lawmakers in a difficult political position since voting for such a measure would almost certainly invite backlash from their Trump-supporting base, and Republicans wouldn't be able to rest on their process argument that they are espousing now: That it's unconstitutional to have an impeachment trial for a former President.

"There are two ways of looking at it," said one Democratic senator who asked not to be named to discuss private discussions. "One is do you have another opportunity to have some kind of condemnation? But another way of looking at it is: Do you give (Republicans) a chance to get well on something that doesn't have as much of an impact in terms of accountability?"

Democrats are clearly grappling with that choice.

"We have to find any pathway we can towards accountability," Sen. Chris Coons, a Democrat from Delaware, told CNN. "That's important for the future of our democracy that you cannot have a president in the last days of his presidency summon and incite and point at the Capitol a mob in an effort to stop the transfer of power and get away with it with no consequences."

Yet some don't seem to have much of an appetite for going that route.

"Censure is, in my view, such a small thing compared to the enormity of what he's done," said Sen. Mazie Hirono, a Democrat of Hawaii. "I'm thinking that maybe other jurisdictions will have other things to say about some questions of (Trump's) other activities."

Others are wary about the time it would take to debate a censure resolution.

"I would be concerned about spending too much time on that," Sen. Debbie Stabenow, a Democrat from Michigan. "Just because people are hurting in the country, people got to get kids back to school -- we've got to get vaccines in people's arms." On censure, Stabenow said: "That's personally not my focus."

"No, not even close," said Sen. Tom Carper, a Delaware Democrat when asked about censure. "This is a lock. This is a shut-and-closed case. It's even more sound and definite than I imagined."

Senate Majority Leader Chuck Schumer, a New York Democrat, and House Speaker Nancy Pelosi, a California Democrat, have been mum about what other recourse they should pursue against Trump. Kaine told CNN on Friday that the leadership has tabled discussion on the matter until after the trial but has not discouraged this course of action.

At a news conference Thursday, Pelosi said "next week I may have some comments to make."

Pelosi added: "I'm not acting upon something that hasn't happened yet."

Some Democrats believe that they should only go that route if there's a strong showing from Senate Republicans.

"It would have to be a bipartisan initiative," said Sen. Jack Reed, a Democrat from Rhode Island. "So that's the first hurdle."

Republicans, however, aren't signaling much appetite for that idea -- and some don't want to address it.

Sen. John Cornyn, a Republican of Texas and a member of the leadership team, wouldn't say if he would agree to censure Trump.

"I'd say the managers chose their course, and I don't think that's going to be an option," Cornyn said of censure.

When asked if Trump should be censured, Sen. Marco Rubio, a Republican of Florida, said: "That's not the question before us," arguing again the Senate shouldn't set a precedent by trying a former President.

Yet, Sen. John Thune, the No. 2 Senate Republican, signaled he could back a censure resolution to punish Trump, saying: "I have seen some resolutions that could attract some support."

Asked by CNN if that includes him, and he nodded: "Yes."

But he threw cold water on a censure resolution to also bar Trump from running for office again through the 14th Amendment.

"I don't think those will go anywhere," Thune said.

Democrats say the ultimate question is would such a move send the right message to any future President.

"I think the we should all be concerned about is that we send the right message that this could never happen again," said Sen. Martin Heinrich, a Democrat from New Mexico.