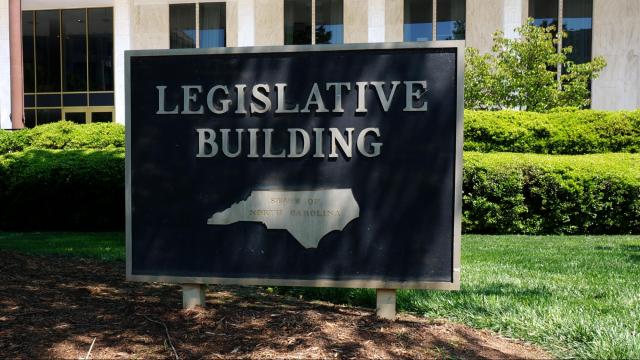 Raleigh, N.C. — Female Democratic lawmakers called on the General Assembly Thursday to pass the Equal Rights Amendment, to forbid the shackling of pregnant prisoners during delivery and to overhaul the legislature's "ludicrous" process for reporting sexual harassment at the statehouse.

The press conference came one day after Illinois became the 37th state to ratify the ERA, which would add a guarantee to the Constitution that "equality of rights under the law shall not be denied or abridged by the United States or by any State on account of sex."

It takes three-fourths of the states, 38, to amend the Constitution. Democrats called on North Carolina to put the effort over the finish line, but there's a major legal disagreement over whether that would really be the case. The congressional deadline for states to ratify this amendment passed in 1982.

The shackling legislation would roughly mirror policies put in place by the state Department of Public Safety after advocacy groups complained that two women were restrained during labor. Legislation to be filed in the Senate would codify those changes, making them more permanent. Supporters said 23 other states have done this.

"We think it's inhumane and unconstitutional," Rep. Bobbie Richardson, D-Franklin, said of the shackling. "I doubt too many women in labor are going to jump up and run anywhere."

Legislators said every female Democrat in the General Assembly plans to sign on to a measure changing the process for reporting sexual harassment, which currently requires people to report problems to their superiors, or to leadership in the House or Senate – House Speaker Tim Moore and Senate President Pro Tem Phil Berger.

Sen. Erica Smith, D-Northampton, called the process ludicrous, convoluted, easily swept under the rug and "totally ineffective." Her intern, Lucy Russell, a rising junior at the University of North Carolina at Chapel Hill, said the current process is "designed to keep victims from coming forward." The new proposal would have confidential reports go to a human resources employee.

Russell called it "a transparent path to justice."

With heightened attention now to sexual harassment, Rep. Deb Butler, D-New Hanover, said now is the time to make these pushes, despite limited prospects for the bills in a legislature controlled by Republicans.

"Women's stories are resonating with the general public," Butler said.

Harassment allegations helped do in one of Butler's Democratic colleagues during the May 8 primary. Rep. Duane Hall, D-Wake, who said he was innocent of most accusations against him, lost his re-election bid by a wide margin.

As for the ERA, its prospects seem slim during this legislative session, but it may become an issue in the November general election, when Democrats hope to break the GOP's legislative super-majority.

Sen. Floyd McKissick, D-Durham, who has repeatedly introduced legislation on the ERA, questioned Thursday why anyone would be against it, saying they must like the people who were once against the abolition of slavery.

"It's the right thing to do, and it's past time we did it," McKissick said.

Opponents make a number of arguments against the amendment, including that it's unnecessary due to existing constitutional protections, that it won't actually address the wage gap and that it would overturn various protections in existing law that are tailored to women.