Democrats Battle Over a New Jersey Jail’s Contract with ICE 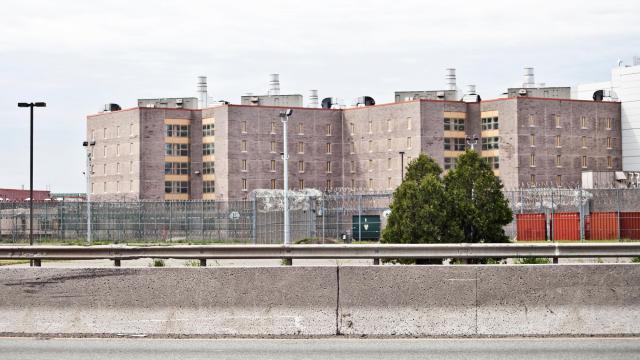 KEARNY, N.J. — A hastily renewed contract between the federal government and Hudson County to house detained immigrants in the Hudson County jail here has become a hotly debated issue among elected officials and activists that has stretched beyond this working-class community.

The contract was renewed July 12 in an unscheduled vote by the Board of Chosen Freeholders, the county’s governing body, despite opposition from two members who wanted more time to review it. The contract with the Immigration and Customs Enforcement, known as ICE, was approved by a 5-2 vote.

The jail, the Hudson County Corrections and Rehabilitation Center, has long been used as a holding facility for immigrants detained by ICE. The last contract was signed in 2003. In fact, the contract dates to 1996, when the county entered into an agreement with the Immigration and Naturalization Service, ICE’s predecessor, to detain foreign nationals who were awaiting deportation after being convicted of crimes and serving their sentences.

But the vote has caused a split among the Democratic leadership in the county over what its relationship with the Trump administration should be. All the members of the freeholder board are Democrats. And soon after the vote, the City Councils of Hoboken and Jersey City, both led by Democrats, passed resolutions urging the freeholders to terminate the contract.

“The county and cities shouldn’t be in the business of profiting off human misery,” said Jersey City Mayor Steve Fulop who, along with Hoboken Mayor Ravinder Bhalla, has criticized the county’s decision to renew its contract with ICE.

Hudson County’s relationship with ICE is not unique. The federal agency has similar deals across the country, including with two other New Jersey counties, Essex and Bergen, under which it pays local governments millions of dollars a year to lease empty jail beds. A similar contract exists between ICE and the Elizabeth Detention Center, a privately run prison in Union County, New Jersey.

But recent arrests of immigrants with no criminal backgrounds have brought increased scrutiny to these deals, and some local governments with similar contracts have canceled them.

In June, Sacramento County, in California, ended a contract with ICE that, for five years, brought in $6.6 million to the county. Cities like Austin, Texas; Springfield, Oregon; and Alexandria, Virginia, have also ended contracts with ICE. The cancellations come at a time when activists — and politicians — have called for the defunding or abolishment of the federal agency.

Under Hudson County’s new contract, ICE pays the county $120 a day per detainee. The contract has no set end date. According to its conditions, it can be in force for a maximum of 10 years, but either party can cancel it with a 60-day notice.

This summer, the jail has housed close to 600 immigrant detainees, including Pablo Villavicencio Calderon, a pizza delivery man who was arrested by ICE agents in New York City while bringing food to the Fort Hamilton army base.

Bill O’Dea was one of two freeholders who voted against the renewal. He said the board needed more time to go over the contract’s terms.

Hudson County made a profit of $8 million last year from the contract, according to James Kennelly, a spokesman for the county. The money, he said, was used to avoid layoffs of corrections officers and “toward any general funded needs that otherwise have to be made up by additional taxation.” In the past, this money has been used to pay for infrastructure projects around the county, according to Freeholder Anthony Romano, who voted in favor of the renewal.

“The revenue from the contract to hold detainees for the INS and then ICE allowed us to make sure that we never laid off a single corrections officer over the last 22 years,” Kennelly said.

If Hudson County backed out of the deal, Kennelly said there would be layoffs and a “significant” tax increase.

O’Dea said the decision to renew the contract was made with “income revenue” in mind and not from a “moralistic” point of view. The number of ICE detainees in the county jail, he said, has doubled in the past two years, an effect of the Trump administration’s efforts to detain and deport more immigrants living in the country illegally. Today, nearly half the population in the Hudson jail is, like Villavicencio, immigrants detained by the federal agency in New York City.

Kennelly said about 40 percent of the detainees in the facility have been charged with violating immigration laws, civil offenses that make them eligible for deportation. The other 60 percent are convicted criminals awaiting deportation. Hudson County’s relationship with ICE first came to attention after activists demanded the county back out of a federal program known as 287(g), which allowed the correctional officers to act as ICE agents and identify unauthorized immigrants who were being held on criminal charges. Following public outcry against the program, Hudson freeholders ended that partnership in March. But the county jail’s contract with the federal agency to house immigrant detainees was maintained.

ICE pays $110 and $117 per detainee a day to Bergen and Essex counties. Emilio Dabul, an ICE spokesman, said 397 detainees are in the Bergen jail, while Essex has 700. Residents in those counties have also spoken out against the contracts. In June, eight anti-ICE activists were arrested outside the Essex County Hall of Records while demanding the county cancel its contract with ICE.

In Hudson County, a group of religious leaders are suing the freeholder board for the way the vote was handled. According to the lawsuit, the unscheduled vote violated the state’s transparency laws.

Romano, who seconded the motion to vote for the contract, said the deal, as it stands, was renewed for humanitarian reasons, as an effort to keep detainees from New York and New Jersey close to their families and legal representation.

“I think the dream of the activists is that you can get every county facility to withdraw from the ICE program to force a change in the national policy,” Romano said. That, he said, is unlikely.

According to Dabul, the ICE spokesman, if Hudson County cancels the deal, “ICE would transfer detainees to other locations, some possibly outside of New Jersey or the metropolitan area.” During a limited tour of the jail, the director, Ronald Edwards, said the controversy is unfounded.

Edwards said some of the money from the ICE contract was used to pay for a $5 million medical wing in the jail, which was built after six inmates died there in the past year, including Carlos Mejia-Bonilla, an ICE detainee, who died from organ failure. The jail, which has had previous complaints about the quality of its medical care, was accused of failing to provide proper care to Mejia-Bonilla, who had diabetes. Edwards said the jail has changed its medical contractor and has invested in more physical and mental health resources.

As he walked around the dormitory where female ICE detainees are housed, Edwards pointed out the resources available to them — a stocked bookshelf, phone booths, two televisions (one tuned to English-language programs, the other to Spanish programming) and a terrace reserved for “outdoor recreational time.”

Immigrants detained in his jail, Edwards said, receive support they would not get in other detention centers, including English as a second language classes, yoga lessons and extended visitation times — an hour a week, 30 minutes more than inmates.

“The citizens of New York should feel a little bit better that they’re here,” Edwards said.

But activists say the jail should not be housing ICE detainees at all, especially those with no criminal record, like Villavicencio, who was held for 53 days.

Sarah Gillman, one of Villavicencio’s lawyers, said when immigrants are detained by ICE, it is supposed to be civil detention. “But, in the end, the detention is taking place within the context of a criminal jail facility and therefore it begs the question, ‘Is it really civil detention?'” she said.