EDITOR'S NOTE: David Leonhardt is an Op-Ed columnist for The New York Times. In 2011, he won the Pulitzer Prize for Commentary for his columns. Previously, he was the founding editor of The Upshot section, which emphasizes data visualization and graphics to offer an analytical approach to the day's news.

Stacey Abrams and Conor Lamb are supposed to represent opposite poles of the Trump-era Democratic Party. She is the new progressive heroine — the first black woman to win a major-party nomination for governor, who will need a surge of liberal turnout to win Georgia. He is the new centrist hero — the white former Marine who flipped a western Pennsylvania congressional district with support from gun-loving, abortion-opposing Donald Trump voters.

But when you spend a little time listening to both Abrams and Lamb, you notice something that doesn’t fit the storyline: They sound a lot alike.

They emphasize the same issues, and talk about them in similar ways. They don’t come across as avatars of some Bernie-vs.-Hillary battle for the party’s soul. T hey come across as ideological soul mates, both upbeat populists who focus on health care, education, upward mobility and the dignity of work.

During her victory speech in a hotel ballroom last week, Abrams recognized the hotel’s workers. In a television ad, Lamb said it always bothered him that teachers and construction workers didn’t get the public respect that he did as a Marine. When asked what one thing she would like to change about Georgia, Abrams named its failure to expand Medicaid. In his campaign, Lamb took on Paul Ryan for referring to Medicare and Social Security as an entitlement — “as if,” Lamb said, “it’s undeserved.” 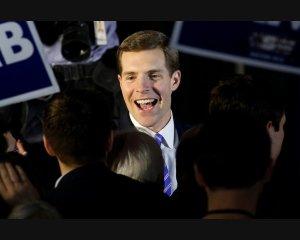 I could keep going with these comparisons, and you’d have trouble keeping straight who said what. Which of the two did "The Nation," that bible of leftism, praise for supporting labor unions more aggressively than most Democrats? Lamb, the purported centrist.

The lesson here isn’t just about these two candidates. Dozens of other Democratic candidates also sound like Abrams and Lamb. The lesson is that Democrats are more united than many people realize — and are running a pretty smart midterm campaign.

Yes, there are some tensions on the political left. But these tensions — over Obama-style incrementalism vs. Bernie-style purism, over the wisdom of talking about impeachment, over whether to woo or write off the white working class — are most intense among people who write and tweet about politics. Among Democrats running for office, the tensions are somewhere between mild and nonexistent.

Democratic candidates aren’t obsessed with Trump, and they aren’t giving up on the white working class as irredeemably racist. They are running pocketbook campaigns that blast Republicans for trying to take health insurance from the middle class while bestowing tax cuts on the rich (charges that have the benefit of being true).

In West Virginia, Richard Ojeda, a former paratrooper running for the House, talks about taxing natural-gas companies to raise teacher pay. In Ohio, another candidate, Aftab Pureval, has challenged his Republican opponent to stop avoiding town halls and debate the tax law. In Kentucky, Amy McGrath became a sensation with a rousing introductory video about how she had overcome sexism to fly military jets. But why was McGrath running for Congress? Because, she explained in the video, Andy Barr, the incumbent, “said he would vote enthusiastically to take health care away from over a quarter-million Kentuckians.”

The political scientist Theda Skocpol is among the sharpest observers of modern American politics, having studied the Obama presidency, the Tea Party reaction and now the Trump resistance. Skocpol and her colleagues are tracking Trump-leaning areas in four swing states, and she too has been struck by the Democrats’ relative unity. “Media pundits and even social scientists want to look for some kind of ideological divide,” she told me. “I just don’t see a huge set of divisions in the Democratic Party. They’re all talking about economic issues.”

Doing so is smart, because it helps Democrats send the most powerful message in politics: I’m on your side — and my opponent isn’t. Americans really are divided on abortion, guns, race and other cultural issues, but they’re remarkably progressive on economics. When Democrats talk about health care, education and jobs, they can focus the white working class on the working-class part of its identity rather than the white part. And Democrats can fire up their base at the same time.

Abrams is a particularly good case study. In the primary, she argued that Democrats should stop chasing conservatives who were lost to the party and instead work to lift progressive turnout. But Abrams’ universal, populist message shows that she hasn’t given up on swing voters. Her message resembles the one that helped Barack Obama win over enough white voters in his 2012 re-election campaign.

None of this means that Abrams will win in November — she’s an underdog — or that the Democrats will take back the House. Trump’s approval numbers, while weak, have risen slightly, and the midterm campaign has a long way to go.

So far, though, the Democrats are defying the clichés about their division and disarray. They’re giving themselves a good chance to win.