Democrats Add a Seat in the House 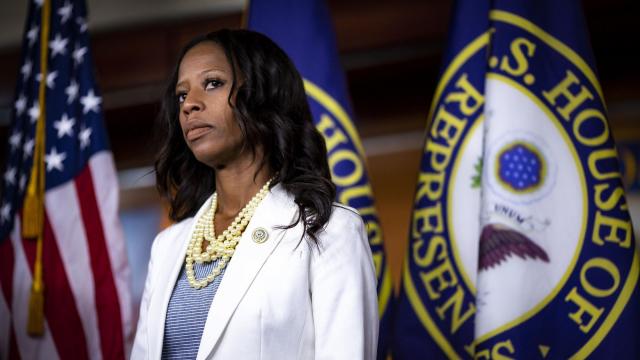 Ben McAdams, the Democratic mayor of Salt Lake County, unseated Rep. Mia Love, the first and only black Republican woman in Congress, whose bid for re-election in deep red Utah failed by a narrow margin on Tuesday, according to The Associated Press.

After two drawn-out weeks of vote counting, McAdams, 43, won with 50.1 percent, or about 700 votes, in the 4th District, a feat that many viewed as unlikely in a district where fewer than 15 percent of voters are registered Democrats.

With this victory, the Democrats have now picked up 38 House seats in the midterm elections. Three House races have yet to be called — two in New York and one in Georgia.

Love, 42, had been seen as a rising star in her party even before she was elected to Congress in 2014. She was given a prime speaking spot at the Republican National Convention in 2012, when she had mounted an unsuccessful congressional bid while serving as the mayor of Saratoga Springs, Utah. Her family’s immigration from Haiti was a central theme of her speech.

The election results were a distinct departure from Love’s re-election in 2016, when she sailed to victory by 13 points. It also underscored the degree to which unease with President Donald Trump is a bipartisan issue in Utah, where his hard-line policies and disdain for decorum has upset liberals and many conservatives whose political attitudes are shaped by the Mormon church. Trump won just 45 percent of the vote in Utah in 2016.

McAdams, who has served two terms as the mayor of Salt Lake County, capitalized on that discontent and on what he portrayed as Love’s closeness to Trump and his agenda. Although she has criticized the president’s attitude toward immigrants and refugees, Love voted for policies favored by Trump almost 96 percent of the time, according to an analysis by the website FiveThirtyEight.

A lawyer and a seventh-generation Utahn, McAdams took a page from the Democrats’ national playbook and focused his campaign on kitchen-table issues, like passing an infrastructure bill, improving health care and cleaning up corruption in Washington.

He portrayed Love as an out-of-touch creature of Washington, a line of attack strengthened by a campaign finance complaint filed with the Federal Election Commission by a progressive group, Alliance for a Better Utah, that forced Love to admit she had improperly raised more than $1 million in campaign funds.

Love raised the money during the primary period, even though she knew she would have no primary challenger after she won the nomination at the party convention in April. Her campaign called the complaint “completely false and desperate” but agreed to redesignate $372,000 for her general election campaign and pay back up to $10,000.

Love’s unique profile — daughter of Haitian immigrants, a convert to the Mormon church and the only Republican member of the Congressional Black Caucus — presented a challenge to Democrats who sought to depict her as a Trump loyalist.

She did not enlist the president’s help in her campaign, which he seemed to interpret as a snub.

At a televised news conference the day after votes were cast, Trump attacked Republicans who lost their seats for what he saw as their insufficient support of him and his agenda. The result of Love’s race was still days from being called, but Trump scornfully lumped her in with the losers anyway.

“Mia Love gave me no love, and she lost,” Trump told reporters. “Too bad. Sorry about that, Mia.”

McAdams rode to victory in the 4th District — which includes a slice of progressive Salt Lake City but extends south to incorporate a string of more conservative cities and towns in Juab, Sanpete and Utah counties — in part thanks to his record as mayor of Salt Lake County, which covers 85 percent of the district.

The city has emerged as a progressive oasis in recent years, and McAdams has positioned himself as a centrist able to meet the needs of its disparate constituencies. They include immigrants, gay people, religious conservatives, tech employees and investors arriving from out of state.

McAdams became well known for negotiating a deal among Republicans, religious leaders and the gay community on a nondiscrimination ordinance, and worked with Republicans in the state Legislature to alleviate homelessness in the region. As part of that effort, McAdams secretly posed as a homeless man for three days.

For her part, Love portrayed McAdams as the politician who was out of touch with the district, casting him as a liberal supporter of Hillary Clinton and abortion rights who would not represent the wishes of Utahns in Congress. In the end, it was not enough.