Democratic Women in Senate Call on Franken to Resign 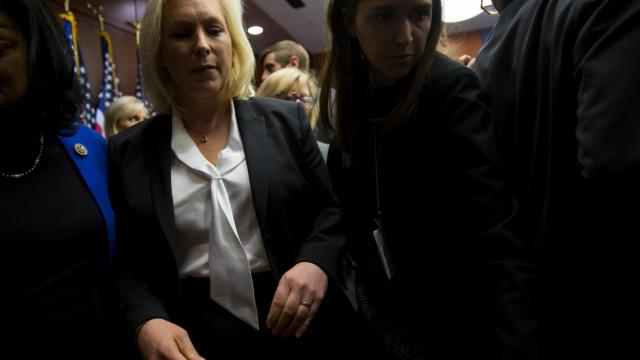 WASHINGTON — Eleven Senate Democratic women — and multiple Democratic men, including the Senate’s second-ranking Democrat — called for Sen. Al Franken to resign Wednesday, after a sixth woman came forward to charge that the Minnesota Democrat had made an improper advance on her.

Franken scheduled an announcement Thursday on his future in the Senate.

That future does not look bright. Gillibrand was joined by Mazie Hirono of Hawaii, Claire McCaskill of Missouri, Patty Murray of Washington, Kamala Harris of California, Tammy Baldwin of Wisconsin, Debbie Stabenow of Michigan, Maria Cantwell of Washington, Heidi Heitkamp of North Dakota, Tammy Duckworth of Illinois and Maggie Hassan of New Hampshire, who issued statements in a coordinated effort.

Sen. Richard J. Durbin of Illinois, the No. 2 Democrat, added his support, as did Sens. Bob Casey of Pennsylvania, Joe Donnelly of Indiana, Patrick Leahy of Vermont, Edward J. Markey of Massachusetts and Sherrod Brown of Ohio, and Tom Perez, chairman of the Democratic National Committee.

“It’s time for him to resign,” Durbin said. “It just seemed that the credible charges continued. I thought it might be an isolated incident or two. It seems to be that there was a pattern of conduct.”

Gillibrand started the avalanche with an extended statement on Facebook.

“As elected officials, we should be held to the highest standards — not the lowest,” Gillibrand wrote on Facebook. “The allegations against Sen. Franken describe behavior that cannot be tolerated. While he’s entitled to an Ethics Committee hearing, I believe he should step aside to let someone else serve.”

Franken has apologized for his behavior, but the senators said his admissions are not enough.

“I have been shocked and disappointed to learn over the last few weeks that a colleague I am fond of personally has engaged in behavior toward women that is unacceptable,” Gillibrand said. “I consider Sen. Franken to be a friend and have enjoyed working with him in the Senate in our shared fight to help American families. But this moment of reckoning about our friends and colleagues who have been accused of sexual misconduct is necessary, and it is painful. We must not lose sight that this watershed moment is bigger than any one industry, any one party, or any one person.”

That was followed in rapid succession with other statements. Hirono said the effort was indeed coordinated.

“We have been in touch with each other,” she said. “It’s been difficult because I consider Al a friend. I’ve sat with him in two committees, but that doesn’t excuse his behavior.”

Hirono added: “We’re at the point where I think that there can be a cultural change in terms of how women are perceived and treated in this country. This kind of bad behavior has been tolerated and ignored for far too long, but not today.”

The Democrats’ move in the Senate came after House Democrats had showed a similarly uncompromising stand against accused party members in that body.

And freshman Rep. Ruben Kihuen, D-Nev., has faced calls for his resignation since accusations emerged Friday that he had repeatedly propositioned his former campaign finance director.

Republicans have largely remained quiet since it emerged Friday that Rep. Blake Farenthold, R-Texas, used $84,000 from a secret taxpayer fund to settle a lurid sexual harassment case filed against him.

And Republicans have been divided over the party’s Senate candidate in Alabama, Roy Moore, who has been accused of sexual misconduct with teenage girls. The special election for the Senate seat once held by Attorney General Jeff Sessions is set for Tuesday.